A story most lovely I'll tell

A story most lovely I'll tell

Tune: THE SUFFERINGS OF CHRIST
Published in 16 hymnals

1 A story most lovely I'll tell,
Of Jesus (O wondrous surprise!)
He suffered the torments of hell,
That sinners, vile sinners might rise:
He left his exalted abode,
When man by transgression was lost;
Appeasing the wrath of a God,
He shed forth his blood as the cost.


2 O, did my dear Jesus thus bleed,
And pity a ruined lost race!
O, whence did such mercy proceed,
Such boundless compassion and grace!
His body bore anguish and pain,
His spirit 'most sunk with the load;
A short time before he was slain,
His sweat was as great drops of blood.


3 O, was it for crimes I had done,
The Savior was hailed with a kiss!
By Judas the traitor alone;
Was ever compassion like this?
The ruffians all joined in a band,
Confined him and led him away,
The cords wrapped around his sweet hands,
O sinner! look at him I pray.


4 To Pilate's stone pillar when led,
His body was lashed with whips:
It never by any was said,
A railing word dropped from his lips:
They made him a crown out of thorns;
The smote him and did him abuse;
The clothed him with crimson, in scorn,
And hailed him, the King of the Jews.


And drove him up Calvary's hill;
Come, mourners, a moment and pause,
All nature looked solemn and still!
They rushed the nails through his hands,
Transfixed and tortured his feet;
O brethren, see passive he stands;
To look at the sight it is great!


6 He cried, My Father, my God,
Forsaken! thou'st left me in pain!
The cross was all colored with blood,
The temple vail bursted in twain:
He groaned his last and he died,
The sun it refused to shine;
They rushed the spear in his side;
This lovely Redeemer is mine.


7 He fought the hard battle, and won
The victory, and gives it most free:
O Christians! look forward and run,
In hopes that his kingdom you'll see;
When he in the clouds shall appear,
With angels all at his command,
And thousands of Christians be there,
All singing with harps in a band.


8 How pleasant an happy the view!
Enjoying such beams of delight!
His beauty to Christians he'll show,
O Jesus, I long for the sight!
I long to mount up in the skies,
In Paradise make my abode,
And sing of salvation on high,
And rest with a pacified God.

THE SUFFERINGS OF CHRIST

All tunes published with 'A story most lovely I'll tell'^ top 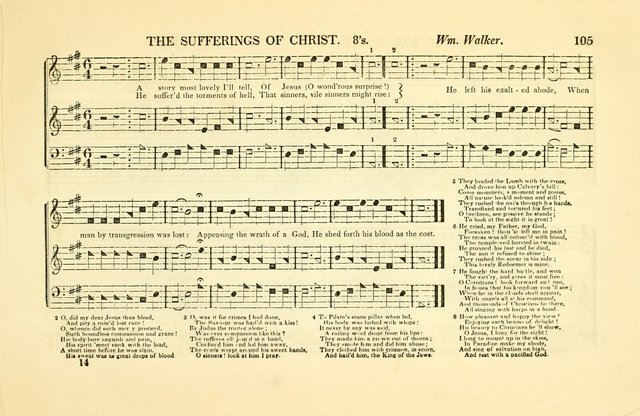