A Vision Seen, a Call Obeyed 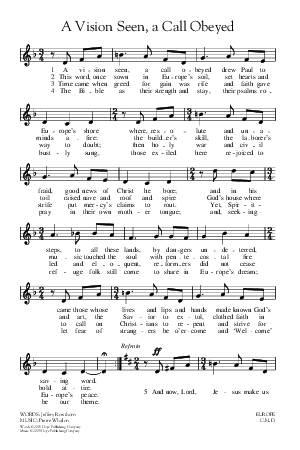 A vision seen, a call obeyed

Jeffery W. Rowthorn (b. Newport, Gwent, Wales, 1934) wrote this text in 1978 while he was Chapel Minister at Yale Divinity School, New Haven, Connecticut. The text was first published in Laudamus (1980), a hymnal supplement edited by Rowthorn and used at the Yale Divinity School. Rowthorn graduated from Cambridge and Oxford Universities, Union Theological Seminary in New York, and Cuddeson Theological College in Oxford. Ordained in 1963 in the Church of England, he served several congregations in England before immigrating to the United States, where he was chaplain at Union Theological Seminary and a faculty member in liturgics at the Yale Institute of Sacred Music, which he helped to establish. He was then elected Suffragan Bishop of t… Go to person page >
^ top

All tunes published with 'A Vision Seen, a Call Obeyed'^ top