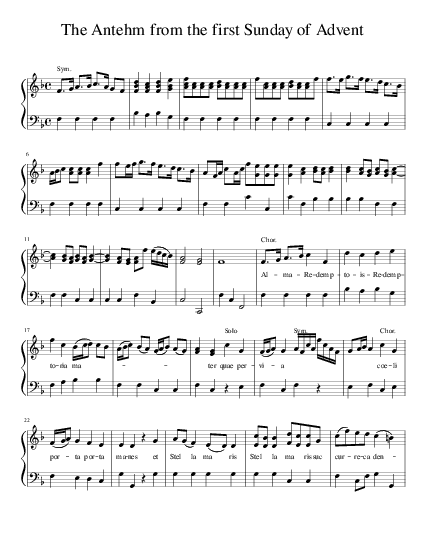 
Source: A Compilation of the Litanies and Vespers Hymns and Anthems as they are sung in the Catholic Church adapted to the voice or organ #40

Hermannus Contractus (also known as Herimanus Augiensis or Hermann von Reichenau) was the son of Count Wolverad II von Altshausen. He was born 18 February, 1013 at Altshausen (Swabia). He was a cripple at birth, but intellectually gifted. Therefore his parents sent him to be taught by Abbot Berno on the island of Reichenau. He took his monastic vows here and died on Reichenau 21 September, 1054. He was a mathematician, astronomer, musician, chronicler, and poet, among other things. He is frequently credited as the author of "Alma Redemptoris Mater" and "Salve Regina" Dianne Shapiro, from Schlager, P. (1910). Hermann Contractus. In The Catholic Encyclopedia. New York: Robert Appleton Company. Retrieved October 13, 2014 from New Advent: ht… Go to person page >
^ top

Alma Redemptoris Mater quae pervia coeli. [Blessed Virgin Mary.] One of four Antiphons to the B. V. M. used at the termination of the Offices, the remaining three being the Ave Regina, the Regina coeli, and the Salve Regina. It is ascribed to Hermannus Contractus, who died 1054. In Daniel, ii. p. 318, the text is given in full, together with a note setting forth its use, with readings from a Munich manuscript probably of the 13th century. Concerning its use we may add from Daniel and other authorities:—

How well this Antiphon was known in England in the Middle Ages we may judge from the use which Chaucer made of it in his Prioress's Tale, where the whole story is associated therewith. The Poet then explains the way in which the child mastered the Antiphon, together with the music to which it was set; and describes his singing it in the public streets, his murder by the Jews for so doing, and the subsequent results.

Translation in common use:—
Mother of Christ, hear thou thy people's cry. By E. Caswall, first published in his Lyra Catholica, 1849, p. 38, and in his Hymns & Poems, 1873, p. 22. Its use is confined to the Roman Catholic collections for schools and missions. 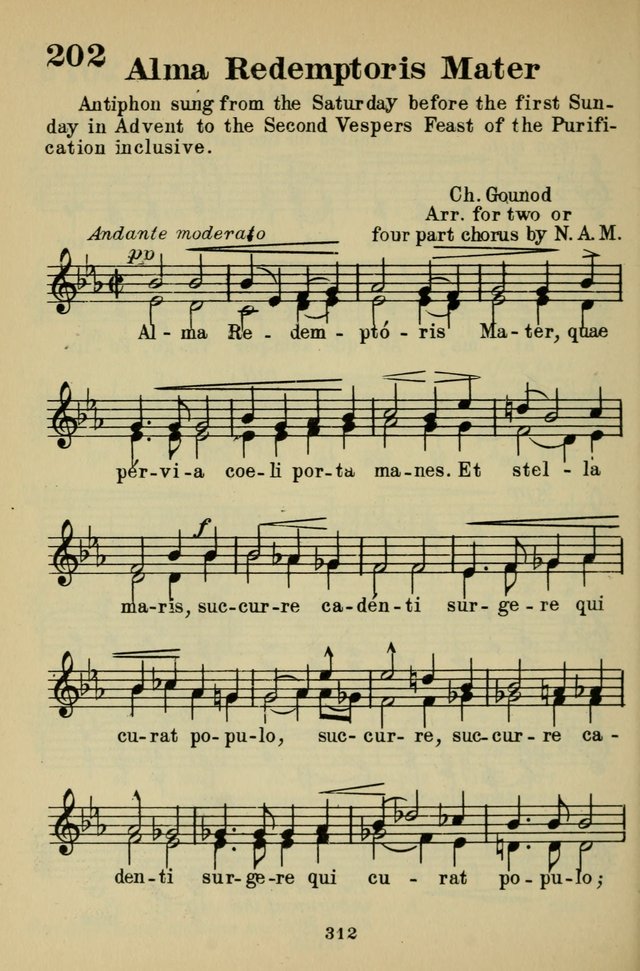 Display Title: The Anthem from the First Sunday (of Advent to the Purification) First Line: Alma Redemptoris Tune Title: [Alma Redemptoris] Date: 1788
A Compilation of the Litanies and Vespers Hymns and Anthems as they are sung in the Catholic Church adapted to the voice or organ #40

Hymns, for the Use of the Catholic Church in the United States of America (New ed.) #82