Among the mountain trees 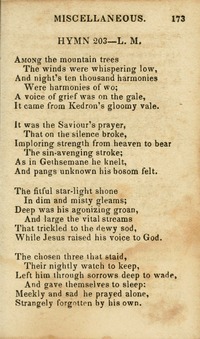 Among the mountain trees

1 Among the mountain trees
The winds were whispering low,
And night's ten thousand harmonies
Were harmonies of woe;
A voice of grief was on the gale,
It came from Kedron's gloomy vale.


2 It was the Saviour's prayer
That on the silence broke,
Imploring strength from heaven to bear
The sin-avenging stroke;
As in Gethsemane he knelt,
And pangs unknown his bosom felt.


3 The fitful starlight shone
In dim and misty gleams;
Deep was his agonizing groan,
And large the vital streams
Which trickled to the dewy sod,
While Jesus raised his voice to God.


4 The chosen three that staid
Their nightly watch to keep,
Left him through sorrows deep to wade,
And gave themselves to sleep;
Meekly and sad he prayed alone,
Strangely forgotten by his own.


5 Along the streamlet's bank
The reckless traitor came,
And heavy on his bosom sank
The load of guilt and shame;
Yet unto those who waited nigh,
He gave the Lamb of God to die!


6 Among the mountain trees
The winds were whispering low,
And night's ten thousand harmonies
Were harmonies of woe;
From cruel voices filled the gale
That came from Kedron's gloomy vale.

Source: The Seventh-Day Adventist Hymn and Tune Book: for use in divine worship #334

All tunes published with 'Among the mountain trees'^ top 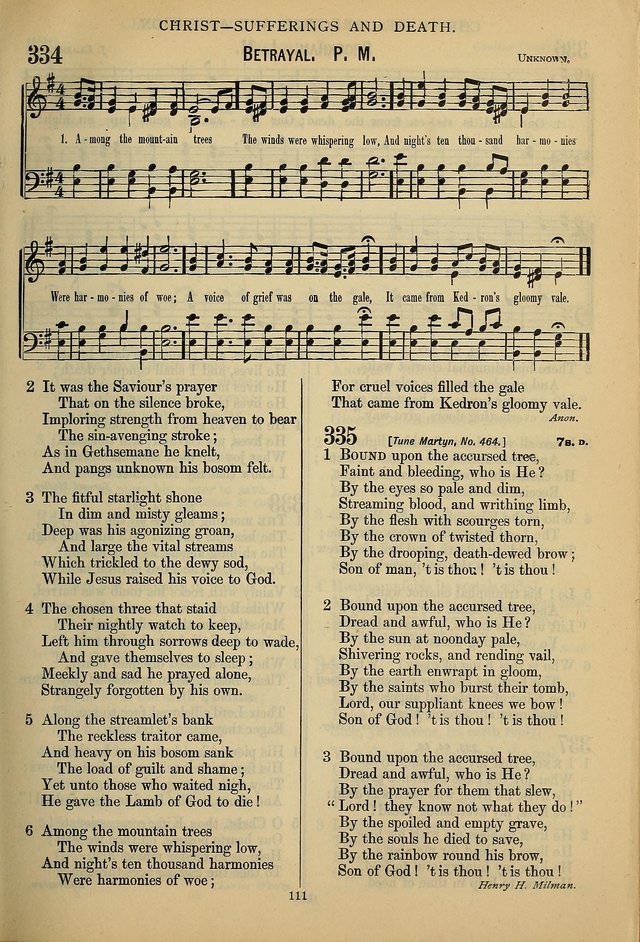 Christian Hymn and Tune Book, for use in Churches, and for Social and Family Devotions #92

Hymns for Use in Divine Worship ... Seventh-Day Adventists #d36

Psalms, Hymns, and Spiritual Songs #B203

The Christian Melodist, a Collection of Popular Songs, for Use in Public and Social Meetings ... #d10

Zion's Harp ... Sacred Songs Not Found in the Methodist Hymn Book and Many Never Before Published with Several Original Pieces #d12