As various as the moon 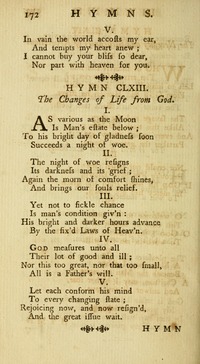 As various as the moon

1 As various as the moon
Is man's estate below:
To his bright day of gladness soon
Succeeds a night go woe.


2 The night of woe resigns
Its darkness and its grief;
Again the morn of comfort shines,
And brings our souls relief.


3 Yet not from fickle chance
These varying scenes arise:
Our dark and brighter hours advance,
By laws supremely wise.


4 God measures out to all
Their lot of good and ill;
Nor this too great, nor that too small,
Ordain'd by heav'n's high will.


5 Hopeful and humble bear
Thy evil and thy good;
Nor by presumption, nor despair,
Weak mortal be subdu'd.

Source: A Collection of Hymns and A Liturgy: for the use of Evangelical Lutheran Churches; to which are added prayers for families and individuals #457

Thomas Scott was born at Norwich, and was the son of a Dissenting minister. After his education he began his ministerial life at Wartmell, in Norfolk, adding also the labours of school-teaching. Subsequently he changed his pastoral relations several times, spending the last years of his life at Hupton, in Norfolk, where he died in 1776. He was the author of some prose works, several poems, and a few hymns. --Annotations of the Hymnal, Charles Hutchins, M.A., 1872… Go to person page >
^ top

As various as the moon. T. Scott. [Changes in Life.] Contributed to Dr. Enfield's Hymns for Public Worship, Warrington, 1772, No. 130, in 6 stanzas of 4 lines, and headed, "The changes of human life appointed by God." In common with all the hymns in that collection it was unsigned. In 1795 it reappeared in the Unitarian hymn-book known as " Kippis's Collection 1795," No. 379, with the signature "Scott." From the foregoing collections it has passed into various hymnals in Great Britain and America, sometimes slightly altered, as "As changing as the moon." Original text as above. It is somewhat curious that Scott did not include this hymn in his Lyric Poems and Hymns, 1773. [William T. Brooke] 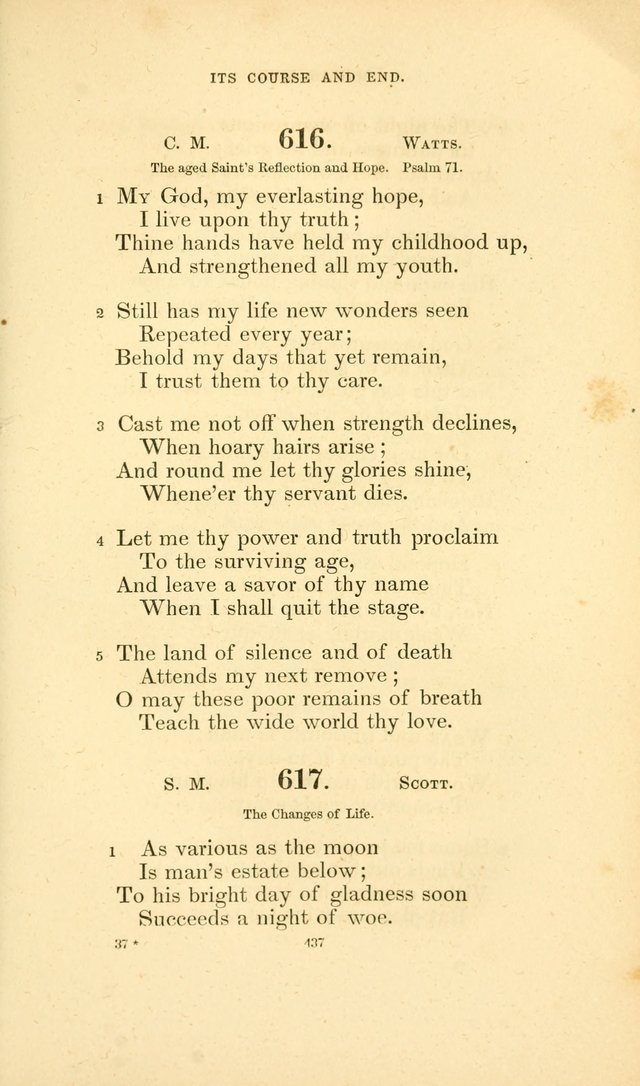 A Collection of Hymns and a Liturgy #457

A Collection of Hymns and A Liturgy #457

A Collection of Hymns, for the Christian Church and Home #303

A Collection of Hymns, More Particularly Designed for the Use of the West Society in Boston. (2nd ed. with Additions) #CLXIII

A Collection of Psalms and Hymns for the Sanctuary #465

A Selection of Psalms and Hymns, Embracing all the Varieties of Subjects #H53

Congregational Hymn and Tune Book; containing the Psalms and Hymns of the General Association of Connecticut, adapted to Suitable Tunes #854

Hymns for the Sanctuary #146

Plymouth Collection of Hymns and Tunes; for the use of Christian Congregations #842

Psalms and Hymns, for Christian Use and Worship #H95

The Baptist Hymn and Tune Book #842

The Pocket Selection of Hymns for the Use of Evangelical Churches and Religious Assemblies in the U. S. lst ed. #d18