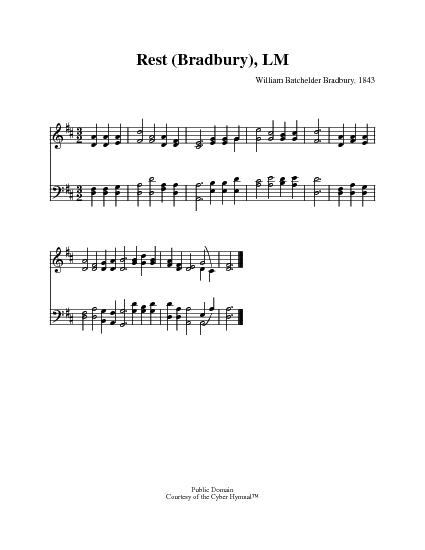 1 Asleep in Jesus! blessed sleep,
From which none ever wakes to weep!
A calm and undisturbed repose,
Unbroken by the last of foes.


2 Asleep in Jesus! O how sweet
To be for such a slumber meet!
With holy confidence to sing
That death has lost his venomed sting.


3 Asleep in Jesus! peaceful rest,
Whose waking is supremely blest!
No fear, no woe, shall dim that hour
That manifests the Savior's power.


4 Asleep in Jesus! O for me
May such a blissful refuge be!
Securely shall my ashes lie,
waiting the summons from on high.

Mackay, Margaret, was born in 1802, and the only daughter of Captain Robert Mackay, of Hedgefield, Inverness. She was married in 1820 to Major William Mackay, of the 68th Light Infantry (afterwards Lt. Colonel) a distinguished officer who died in 1845. Mrs. Mackay died at Cheltenham, Jan. 5, 1887. In addition to various prose works Mrs. Mackay published Thoughts Redeemed; or Lays of Leisure Hours, 1854, which contained 72 original hymns and poems. [Rev. James Mearns, M.A.] -- John Julian, Dictionary of Hymnology (1907)  Go to person page >
^ top

"Sleeping in Jesus. By Mrs. Mackay, of Hedgefield. This simple but expressive sentence is inscribed on a tombstone in a rural burying ground in Devonshire, and gave rise to the following verses."

In reprinting it at p. 1 of her Thoughts Redeemed, 1854, Mrs. Mackay says the burying ground meant is that of Pennycross Chapel. She adds:—

"Distant only a few miles from a bustling and crowded seaport town, reached through a succession of those lovely green lanes for which Devonshire is so remarkable, the quiet aspect of Pennycross comes soothingly over the mind. “Sleeping in Jesus' seems in keeping with all around."

From the Amethyst it has passed into numerous hymnals in Great Britain and America, and was recently included, in full, and unaltered, as No. 241 in the Scottish Presbyterian Hymnal, 1876, and as No. 31 in the Free Church Hymn Book, 1882. In Thring's Collection 1882, No. 557, we have a cento composed of the first stanza of Mrs. Mackay's hymn, and stanzas ii.-vi. from Thring's "Asleep in Jesus, wondrous sleep," as noted below, but somewhat altered. This cento is unknown beyond Thring's Collection Rev. James Mearns, M.A.]

All tunes published with 'Asleep in Jesus! Blessed Sleep'^ top 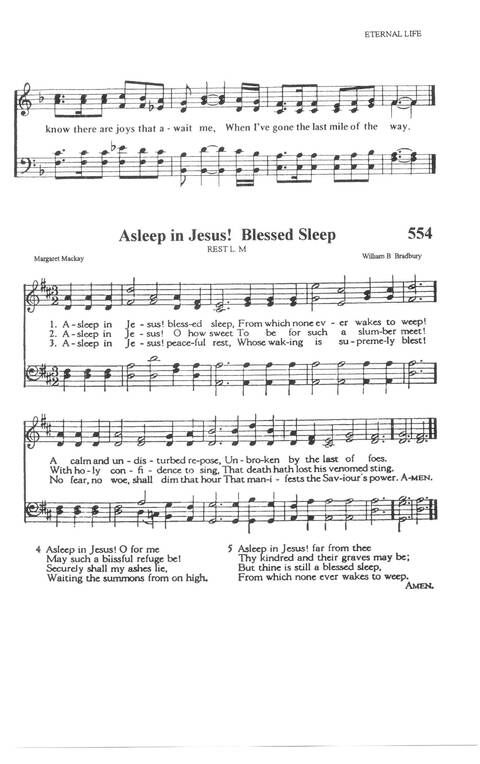 Great Songs of the Church (Revised) #671