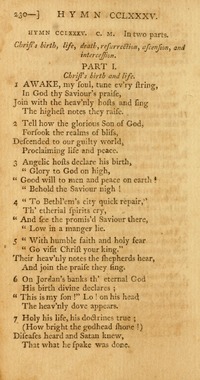 Awake, my soul, tune every string

Part I
Christ's birth and life:


1 Awake, my soul, tune every string,
In God thy Savior's praise,
Join with the heavenly hosts and sing
The highest notes they raise.


2 Tell how the glorious Son of God,
Forsook the realms of bliss,
Descended to our guilty world,
Proclaiming life and peace.


3 Angelic hosts declare his birth,
"Glory to God on high,
Good will to men and peace on earth!
Behold the Savior nigh!


4 "To Bethlehem's city quick repair,"
Th' ethereal spirits cry,
"And see the promised Savior there,
Low in a manger lie.


5 "With humble faith and holy fear
Go visit Christ your king."
Their heavenly notes the shepherds hear,
And join the praise they sing.


6 On Jordan's banks the eternal God
His birth divine declares;
"This is my son!" Lo! on his head
The heavenly dove appears.


7 Holy his life, his doctrines true;
(How bright the godhead shone!)
Diseases heard and Satan knew,
That what he spake was done.


8 Behold the Savior on the tree,
With arms extended wide!
From death a sinful world to free,
He groaned, and bled, and died!


9 The sun astonished veiled its face,
When the Creator bled;
His groans the earth and rocks displace,
And wake the sleeping dead.


10 But when the appointed hour was come,
The sleeping Savior wakes;
Behold! he rises from the tomb,
And death a captive makes.


11 On the eternal God's right hand
The great Redeemer sits;
Both heaven and earth to his command
The Father now commits.


12 Our advocate himself he stiles,
The sinner's cause he pleads,
Through him the Father looks and smiles,
While thus he intercedes.


13 Whom once he loves he'll ne'er forget,
His counsels guide them still;
His grace their weary souls will seat
On heavens eternal hill.


14 Reviving though! then humble soul,
With courage venture on!
Though earth and hell against thee roll,
In Christ the battle's won.


The Hartford Selection of Hymns from the most approved authors, 1799 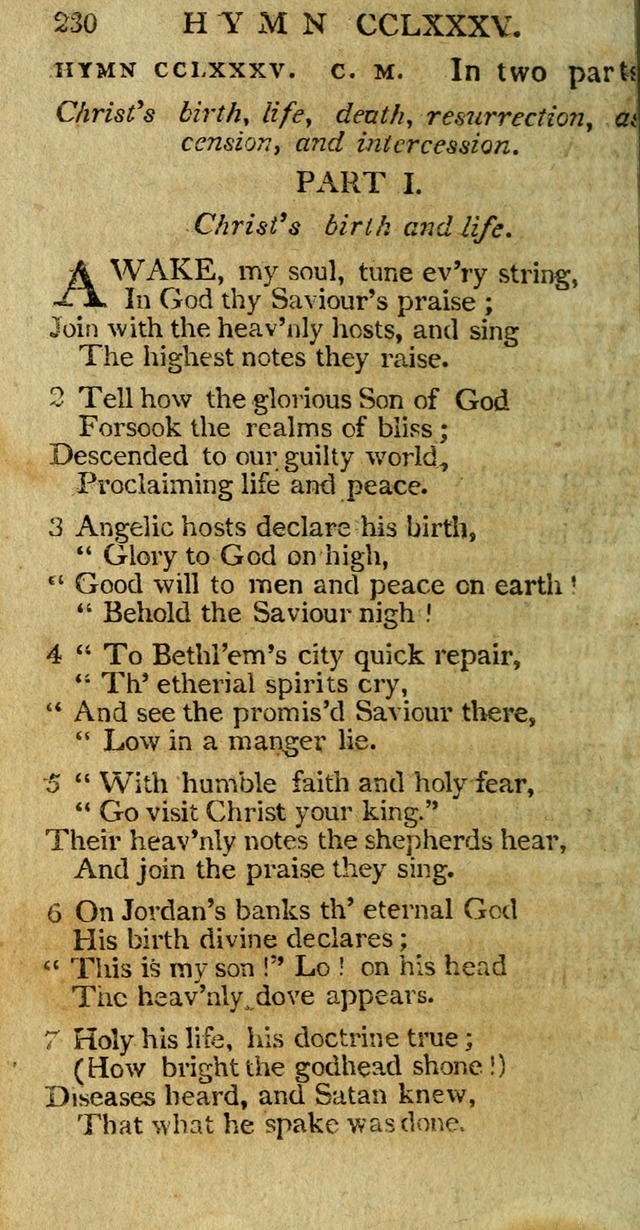 View Page
The Hartford Selection of Hymns from the most approved authors to which are added, a number never before published. (1810), p.241
^ top

The Hartford Selection of Hymns from the most approved authors to which are added, a number never before published. #285

The Hartford Selection of Hymns from the Most Approved Authors #CCLXXXV

The Hartford Selection of Hymns #CCLXXXV