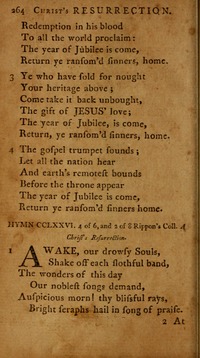 1 Awake, our drowsy souls,
Shake off each slothful band,
The wonders of this day
Our noblest songs demand.
Auspicious morn! thy blissful rays,
Bright seraphs hail in songs of praise.


2 At thy approaching dawn,
Reluctant death resigned
The glorious prince of life,
Her dark domains confined.
The angelic host around Him bends,
And, 'midst their shouts, the God ascends.


3 All hail, triumphant Lord,
Heaven with hosannas rings;
While earth, in humbler strains,
Thy praise responsive sings:
Worthy art thou, who once wast slain,
Through endless years to live and reign.


4 Gird on, great god, thy sword,
Ascend thy conquering car,
While justice, truth, and love
Maintain the glorious war.
Victorious thou, thy foes shalt tread,
And sin and hell in triumph lead.


5 Make bare thy potent arm,
And wing the unerring dart,
With salutary pangs,
To each rebellious heart.
Then dying souls for life shall sue,
Numerous as drops of morning dew.

Scott, Elizabeth, daughter of the Rev. Thomas Scott, Independent Minister at Norwich, and sister of Thomas Scott, noted below, was born at Norwich about 1708. In 1751 she was married to Elisha Williams, who had been from 1726 to 1739 Rector of Yale College, U.S.A., and with him she proceeded to Connecticut. On the death of Mr. Williams she was married to the Hon. William Smith, of New York, who also predeceased her. She died at Wethersfield, Connecticut, June 13th, 1776. In connection with Miss Scott's hymns we are acquainted directly and indirectly with four manuscripts, each of which is interesting in itself. These are as follows:— i. The first manuscript is in the library of Yale College, New Haven, Connecticut. Mr. Franklin Bowditch… Go to person page >
^ top

Awake, our drowsy souls. Elizabeth Scott. [Sunday.] First published in the Baptist Collection of Ash and Evans, Bristol, 1769, No. 307, in 5 stanzas of 6 lines, and appointed as “A hymn for Lord's Day Morning." From that collection it passed into several later hymnals, including Rippon, Dobell, and others; but it is almost entirely unknown to modern hymnbooks except in America having been superseded by "Awake, ye saints, awake, And hail," &c, a recast of the same in 4 stanzas (stanza iii. being the original with "and " for "while," line 3) made by T. Cotterill, and given in the first ed. of his Selection, 1810. This form of the hymn is in somewhat extensive use both in Great Britain and America, and is usually ascribed correctly to "Elizabeth Scott and Thomas Cotterill." In many of the modern American hymnals, stanza iv. is omitted; but the English generally give the text from Cotterill as in Baptist Psalms and Hymns, 1858, in this case the only alteration is "blest" for "bless'd" in stanza i., 1. 5. Another form of the hymn is:— "Servants of God, awake." It consists of stanzas i.—iii. of Cotterill's recast, slightly altered. It appeared in the Harrow School Hymn Book, 1855, and from thence passed into Church Hymns , 1871, No. 39. In the Hymn Book of the Evangelical Assoc., Cleveland, Ohio, 1881, No. 604, stanzas i., ii. are given as "Children of God, awake"; and in the Marlborough College Hymns, 1869, stanzas i.—iii. as "Come, sons of God, awake." [Willliam T. Brooke]

All tunes published with 'Awake our drowsy souls'^ top 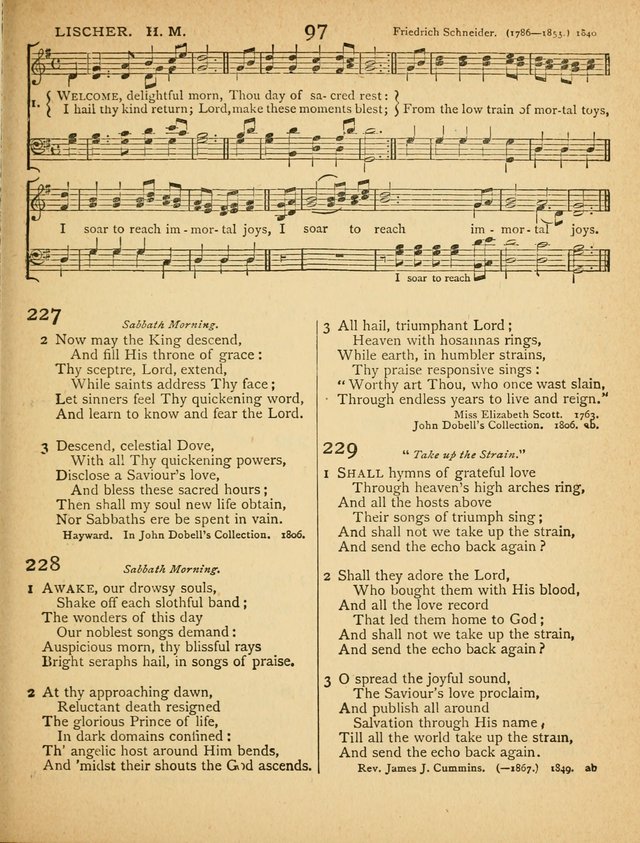 View Page
Songs of Praise: a selection of standard hymns and tunes for the Sunday-shcools and social meetings (1880), p.98
^ top

A Baptist Hymn Book, Designed Especially for the Regular Baptist Church and All Lovers of Truth #d60

A Collection of Evangelical Hymns #d18

A Collection of Hymns from Various Authors. New ed. #d31

A Collection of Psalms and Hymns for the use of Universalist Societies and Families (13th ed.) #29

A Collection of Psalms and Hymns for the Use of Universalist Societies and Families 16ed. #29

A New Selection of Hymns; designed for the use of conference meetings, private circles, and congregations, as a supplement to Dr. Watts' Psalms and Hymns #4

A New Selection of Nearly Eight Hundred Evangelical Hymns, from More than 200 Authors in England, Scotland, Ireland, & America, including a great number of originals, alphabetically arranged #547

A New Selection of Seven Hundred Evangelical Hymns ... intended as a Supplement to Dr. Watts's Psalms and Tunes #547

A Pastor's Selection of Hymns and Tunes #302

A Selection of Hymns from the Best Authors, intended to be an Appendix to Dr. Watts' Psalms & Hymns. 2nd Baltimore ed. #aCCCXLIX

A Selection of Hymns from the Best Authors. #349

A Selection of Hymns, from the Best Authors, Designed as a Supplement to Dr. Watts' Psalms and Hymns #d47

A Selection of Hymns, from Various Authors #d26

A Selection of Hymns #CCCXLIX

A Selection of Psalms and Hymns #276

A Selection of Psalms and Hymns #CCLXXVI

A Selection of Psalms and Hymns #276

American Sunday School Psalmody; or, hymns and music, for the use of Sunday-schools and teacher's meetings; with a manual of instruction #143

Congregational Hymn and Tune Book; containing the Psalms and Hymns of the General Association of Connecticut, adapted to Suitable Tunes #874

Hymns and Songs of Praise for Public and Social Worship #948

Hymns for the Sanctuary and Social Worship #100

Hymns for the Use of the Brethren in Christ #d39

Hymns for the Use of the New Jerusalem Church #d27

Melodies of the Church #d86

Plymouth Collection of Hymns and Tunes; for the use of Christian Congregations #65

Psalms and Hymns Adapted to Public Worship, and Approved by the General Assembly of the Presbyterian Church in the United States of America #H474

Psalms and Hymns Adapted to Social, Private and Public Worship in the Presbyterian Church in the U.S.A. #d53

Psalms and Hymns, for Christian Use and Worship #H37

Psalms and Hymns, for Social and Private Worship #d48

Select Melodies, comprising the Best of Those Hymns and Spiritual Songs in Common Use #d17

Select Melodies, Comprising the Best of Those Hymns and Spiritual Songs in Common Use not Found in the Standard Methodist Episcopal Hymnal #d17

Select Melodies; Comprising the Best Hymns and Spiritual Songs in Common Use, and not generally found in standard church hymn-books #177

The Baptist Hymn and Tune Book #65

The Hartford Selection of Hymns from the most approved authors to which are added, a number never before published. #322

The Hartford Selection of Hymns from the Most Approved Authors #CCCXXII

Display Title: A Hymn for the Lord's day mroning First Line: Awake, our drowsy souls Meter: As the 148th Psalm Date: 1799 Subject: Sabbath |
The Hartford Selection of Hymns from the Most Approved Authors #CCCXXII

The Hartford Selection of Hymns #CCCXXII

The Key-Stone Collection of Church Music #163

The Philadelphia Hymn Book; or, a selection of sacred poetry, consisting of psalms and hymns from Watts...and others, adapted to public and private devotion #616

The Service of Song for Baptist Churches #d62

The Service of Song for Baptist Churches #d38