Beyond the Glittering, Starry Skies 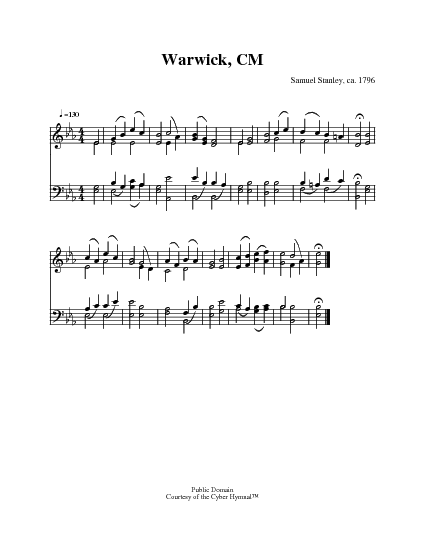 Beyond the starry skies, Far as the eternal hills

1 Beyond the starry skies,
Far as the eternal hills,
There in the boundless world of light
Our great Redeemer dwells.
Around him angels fair
In countless armies shine;
And ever, in exalted lays,
They offer songs divine.


2 "Hail, Prince of life!" they cry,
"Whose unexampled love
Moved thee to quit these glorious realms
And royalties above."
And when he stooped to earth,
And suffered rude disdain,
They cast their honors at his feet,
And waited in his train.


3 They saw him on the cross,
While darkness vailed the skies;
And when he burst the gates of death,
They saw the Conqueror rise.
They thronged his chariot wheels,
And bore him to his throne;
Then swept their golden harps and sung,
"That glorious work is done."

Source: The Seventh-Day Adventist Hymn and Tune Book: for use in divine worship #126

Turner, Daniel, M.A., was born at Blackwater Park, near St. Albans, March 1, 1710. Having received a good classical education, he for some years kept a boarding-school at Hemel Hempstead, but in 1741 he became pastor of the Baptist church, Reading. Thence he removed, in 1748, to Abingdon, and continued pastor of the Baptist church there until his death on Sept. 5, 1798. He was much respected throughout his denomination, and was the friend and correspondent of Robert Robinson, Dr. Rippon, and other eminent men of that day. He probably received the honorary degree of M.A. from the Baptist College, Providence, Rhode Island. Turner was the author of works on Open Communion and Social Religion; also of Short Meditations on Select Portions of Scr… Go to person page >

Fanch, James, known as the joint author with Daniel Turner of the hymn "Beyond the glittering, starry skies " (q.v.), was born in 1704, and died Dec. 12, 1767. He was for many years a Baptist Minister at Romsey, and Lockerly, Hants. In addition to Sermons, &c, he published a Paraphrase on a Select Number of the Psalms of David, done from the Latin of Buchanan, to which are added some Occasional Pieces, 1764. --John Julian, Dictionary of Hymnology (1907)  Go to person page >
^ top

Beyond the glittering, starry globes. J. Fanch. [Ascension.] This hymn appeared in the Gospel Magazine, June, 1776. It was signed "F.," i.e. Fanch, and is as follows:—

1. "Beyond the glitt'ring starry globes,
Far as th’ eternal hills,
There, in the boundless worlds of light,
Our great Redeemer dwells.

2. "Legions of angels, strong and fair,
In countless armys shine.
At his right hand, with golden harps
To offer songs divine.

3. “Hail, Prince!' (they cry) ‘for ever hail!
Whose unexampled love,
Mov'd Thee to quit these glorious realms,
And royaltys above.'

4. "Whilst He did condescend, on earth,
To suffer rude disdain;
They threw their honors at His feet,
And waited in His train.

5 "Thro' all His travels here below
They did His steps attend:
Oft gaz'd; and wonder'd where, at last,
This scene of love would end.

6. "They saw His heart transfixed with wounds,
His crimson sweat and gore:
They saw Him break the bars of death,
Which none e'er broke before.

7. "They brought His chariot from above
To bear Him to His throne;
Clapt their triumphant wings, and cry'd
‘The glorious work is done!' "

Of this text the following arrangements have come into common use:—
1. The original, slightly altered, in Toplady's Psalms & Hymns, 1776 (but omitted from the 2nd ed., 1787); De Courcy's Collection Psalms & Hymns, 4th edition, 1793, No. 254; Joseph Middleton's Hymns Psalms & Hymns, 1793, No. 277; and others.
2. "Beyond, beyond the starry skies," in Kempthorne's Psalms & Hymns, 1810, No. 85; and later works.
3. "Beyond this glittering starry sky." In Cotterill's Selection, 1810, No. 29, with omission of stanzas iii. and iv., and the addition of stanza vi. In the 8th edition, 1819, this was altered by the restoration of the original arrangement of stanzas, stanza iii. being also restored. It is found in later collections.
4. "Beyond the glittering starry skies." In Elliott's Psalms and Hymns, 1835. This is the Original text very slightly altered. It is repeated in the New Congregational Hymn Book, 1859, but attributed to Gregg in error.
The most popular forms of this hymn are centos from it in its enlarged form in 28 stanzas. This expansion by the addition of 21 stanzas was made by D. Turner (q. v.) and published in his Poems in 1794. Of these 21 stanzas, 19 are given in Lord Selborne's Book of Praise, 1862, together with the first four by Fanck slightly altered. The centos from the Fanch-Turner text are most confusing. Opening with "Beyond the glittering, starry skies," we have these groups amongst others:—
(1) Smith and Stow's Baptist Psalmist, Boston, U.S., 1813, and others. (2) Baptist Service of Song, Boston, U.S., 1871, &c. (3) Spurgeon's Our Own Hymn Book, 1866; Snepp's Songs of Grace & Glory, 1872; Hymns & Songs of Praise, N.Y., 1874, and others. (4) Baptist Psalms and Hymns, 1858. (5) Baptist Hymnal, 1879. These by no means exhaust the list; but they are sufficient to show that no arrangement nor text, other than the original, can be depended upon where accuracy is required.
Another arrangement which is somewhat popular in America is the S.M. hymn, "Beyond the starry skies." It is rewritten from the Fanch-Turner text, and amongst modern hymnals is found in the Plymouth, 1855; Hymns for Church and Home, Phila., 1860; Songs for the Sanctuary, N. Y., 1865-72; Laudes Domini, N. Y., 1884, and others.
In the American Church Pastorals , Boston, 1864, No. 168, is a cento from Turner's addition to Fanch's hymn. It begins, "Blest angels who adoring wait."
In the Baptist Register of March, 1791, the following note concerning the Fanch-Turner text is given. It is addressed to Dr. Rippon by D. Turner, and dated Feb. 22, 1791.

"As to your enquiry concerning the hymn 'Jesus Been of Angels' [this hymn], it is true, as you were told by our good brother Medley that one part of it was made by my dear friend the Rev. James Fanch, of Rumsey and the other part by me."

All tunes published with 'Beyond the Glittering, Starry Skies'^ top 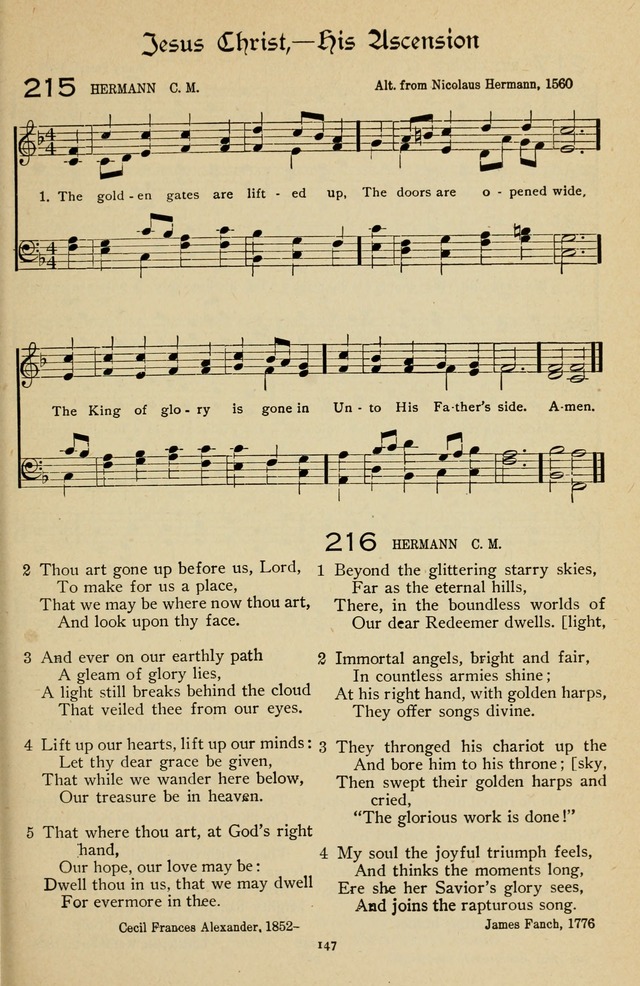 View Page
The Sanctuary Hymnal, published by Order of the General Conference of the United Brethren in Christ (1914), p.148
^ top