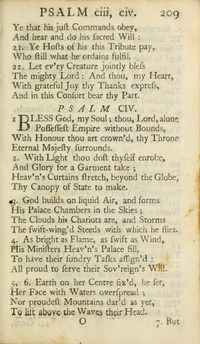 
2 With light thou dost Thyself enrobe,
And glory for a garment take;
Heaven's curtains stretch beyond the globe,
Thy canopy of state to make.


3 God builds on liquid air, and forms
His palace-chambers in the skies;
The clouds His chariots are, and storms
The swift-wing'd steeds with which he flies.


4 As bright as flame, as swift as wind,
His ministers heaven's palace fill;
They have their sundry tasks assign'd
All prompt to do their sovereign's will.


5 In praising god while he prolongs
My breath, i will that breath employ;
And join devotion to my songs,
Sincere, as in Him is my joy.


Source: Hymnal: according to the use of the Protestant Episcopal Church in the United States of America #410

Bless God, my soul: Thou, Lord alone. N. Tate. [Psalm civ.] This version of Psalm civ. is found in Tate's Miscellanea Sacra, 1696, and in the same year in the New Version. Its appearance in "the former work determines its authorship as distinct from Brady. From its ornate character some have concluded that most, if not all the renderings in the New Version which partake of that character, are by him. This conclusion is plausible and possible, but by no means certain. It was introduced into use in America early in the present century, and is still given in a few collections.

GENEVAN 84 first appeared in the 1562 edition of the Genevan Psalter; Howard Slenk (PHH 3) harmonized it in 1985. The rhythm of the first phrase is altered to match that of the second and final phrase. (The original first phrase began with two half notes followed by four quarter notes.) This loved G…

All tunes published with 'Bless God, my soul, thou, Lord, alone'^ top 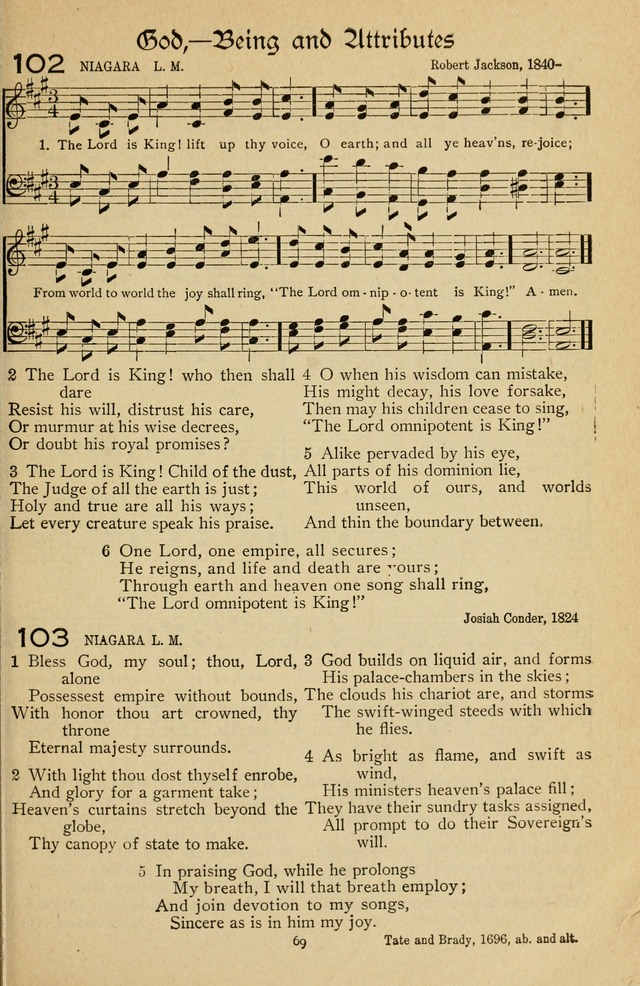 View Page
The Sanctuary Hymnal, published by Order of the General Conference of the United Brethren in Christ (1914), p.70
^ top

A Collection of Psalms and Hymns for Public Worship #P.VIII

A Collection of Psalms and Hymns for Publick Worship #P.VIII

A Collection of Psalms and Hymns for Publick Worship #P.CIVa

A Collection of Psalms and Hymns for Publick Worship (2nd ed.) #P.CIVa

A New Version of the Psalms of David #CIV

A New Version of the Psalms of David #209

A Selection of Psalms and Hymns for Every Sunday ... Diocese of Quebec #d11

A Selection of Psalms and Hymns #76b

A Selection of Psalms and Hymns #76c

A Selection of Psalms, Hymns and Anthems, for every Sunday and principal festival throughout the year. for the use of congregations in the dioceses Quebec and Toronto. #P104a

Hymns and Songs of Praise for Public and Social Worship #136

Selections from the Psalms of David in Metre #83

The Church Hymnal with Canticles #410

The Psalms of David #CIV

The Sanctuary Hymnal, published by Order of the General Conference of the United Brethren in Christ #103

The Whole Book of Psalms #CIV.I