The Privileges of the Sons of God 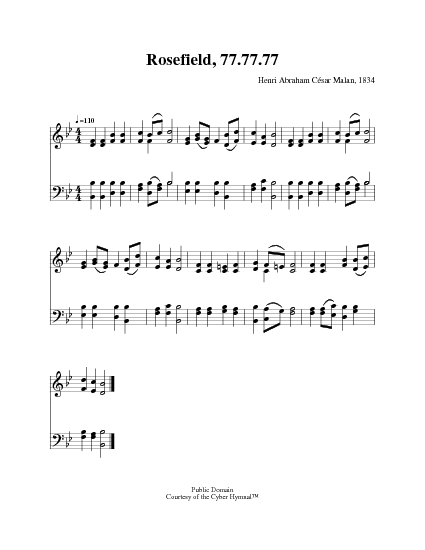 Blessed are the sons of God

1 Blessed are the sons of God,
they are bought with Christ's own blood;
they are ransomed from the grave,
life eternal they shall have:


Refrain:
With them numbered may we be,
here and in eternity.


2 They are justified by grace,
they enjoy the Savior's peace;
all their sins are washed away,
they shall stand in God's great day: [Refrain]


3 They are lights upon the earth,
children of a heav'nly birth;
one with God, with Jesus one,
glory is in them begun: [Refrain]

Humphreys, Joseph, son of Asher Humphreys, minister at Burford, Oxfordshire, was born at Burford, Oct. 28, 1720, and educated at a grammar school at Fairford, and at an academy for the training of young men for the ministry in London. From the latter he was expelled, Dec. 25, 1739, because of his attachment to Whitefield. For a short time he associated with the Wesleys, but eventually joined G. Whitefield, and subsequently preached at Bristol, London, and Deptford. He died in London (date unknown), and was buried in the Moravian Cemetery at Chelsea. He was a contributor to Whitefield's Christian History (1741-1748), 1742, &c, and published, 1742, An Account of Joseph Humphreys's Experiences, &c. As a hymnwriter he is not widely known. His… Go to person page >
^ top

Blessed are the sons of God. J. Humphreys. [Christian Privileges.] This is the first of six hymns added by J. Cennick to Pt. ii. of his Sacred Hymns for the Use of Religious Societies, Bristol, F. Farley, 1743, No. 72, p. 95. It is in 8 stanzas of 4 lines, and is headed, "The Priviledges of God's Children." Concerning these six hymns J. Cennick says, "These were done by Mr. Joseph Humphreys." In Whitefield's Collection, 1753, it was given as No. 14 in that part of the collection devoted to “Hymns for Society, and Persons meeting in Christian Fellowship." As shortly after this date it fell out of use in its original form, and the text is somewhat difficult to find….
The Rev. R. Conyers published in his Collection of Psalms & Hymns, 1st edition, 1767, as No. 84, the hymn in a new form. Dealing with the hymn as an unbroken poem of 32 lines, he took the first 6 lines, added thereto the last lines of the hymn as altered by Whitefield ("With them," &c.) as a refrain, and constituted them as stanza i.; the next 6 lines, with the same refrain as stanza ii., and so on to the end, thus producing a hymn of 5 stanzas of 8 lines. Toplady, in his Psalms & Hymns, 1776, No. 116, adopted Conyers's idea of using the last two lines of the hymn as a refrain, by adding them to Humphreys's stanzas i.-iv., vi., and v., in the order named, and thereby producing a hymn of 6 stanzas of 6 lines It is to this arrangement of the text that most modern editors both in Great Britain and America are indebted for their centos. Portions of the hymn in centos of varying lengths, are in extensive use. 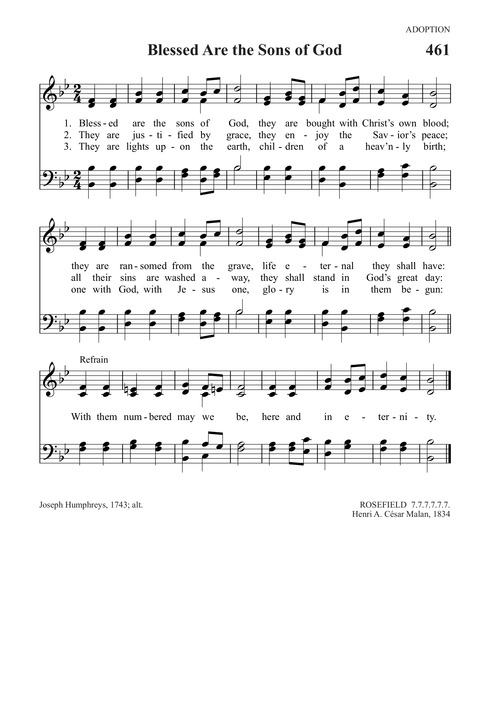 Display Title: With them numbered may we be First Line: Blessed are the sons of God Author: Joseph Humphreys Date: 2012
The Baptist Hymnal #510