Blest is the man whose heart expands 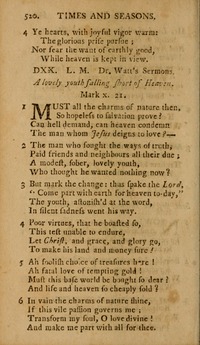 Blest is the man whose heart expands

1 Blest is the man whose heart expands
At melting pity's call,
And the rich blessings of whose hands
Like heavenly manna fall.


2 Mercy, descending from above,
In softest accents please;
Oh may each tender bosom move
When mercy intercedes.


3 Be ours the bliss in wisdom's way
To guide untutored youth,
And lead the mind that went astray
To virtue and to truth.


4 Children our kind protection claim,
And God will well approve,
When infants learn to lisp His name,
And their Creator love.


5 Delightful work! your souls to win,
And turn the rising race
From the deceitful paths of sin,
To seek redeeming grace.


6 Almighty God! thy influence shed
To aid this good design:
The honours of thy name be spread,
And all the glory thine.

Straphan, Joseph. This author contributed 3 hymns to Rippon's Baptist Selection, 1787 (see p. 149, i.), viz.:—(1) "Blest is the man whose heart expands" (Education of the Young, (2) "On wings of faith mount up, my soul, and rise" (Heaven anticipated); and (3) "Our Father, Whose eternal sway" (Divine Worship). From No. 1 two centos have been taken:—(1) "Blest work the youthful mind to win," in several collections in Great Britain; and (2), "Delightful work, young souls to win," in use in America. Straphan's birth is given as 1757. From a hymn in the Gospel Magazine, we find that he resided at that time at Hanley. Further details are wanting. [Rev. W. R. Stephenson] --John Julian, Dictionary of Hymnology, Appendix, Part II (190… Go to person page >
^ top

Blest is the man whose heart expands. J. Straphan. [For Sunday Schools.] First published in Rippon's Selection, 1787, No. 523, in 6 stanzas of 4 lines. The form in which it usually appears in 4 stanzas was included by Cotterill in his Selection, 1819, No. 218, where it is appointed to be sung "At a Sermon for Charity Schools." A cento from this hymn, "Blest work, the youthful mind to win," is composed of stanzas v., iv., iii., and vi. considerably altered. It is found in this form in Baldwin's Preston Set of Psalms & Hymns, 1831, No. 21, and has been frequently repeated in later collections. A second cento, beginning with an alteration of stanza iii., as “Blest is the work in wisdom's ways," has also come into use. In these varying forms this hymn has attained to an extensive circulation. 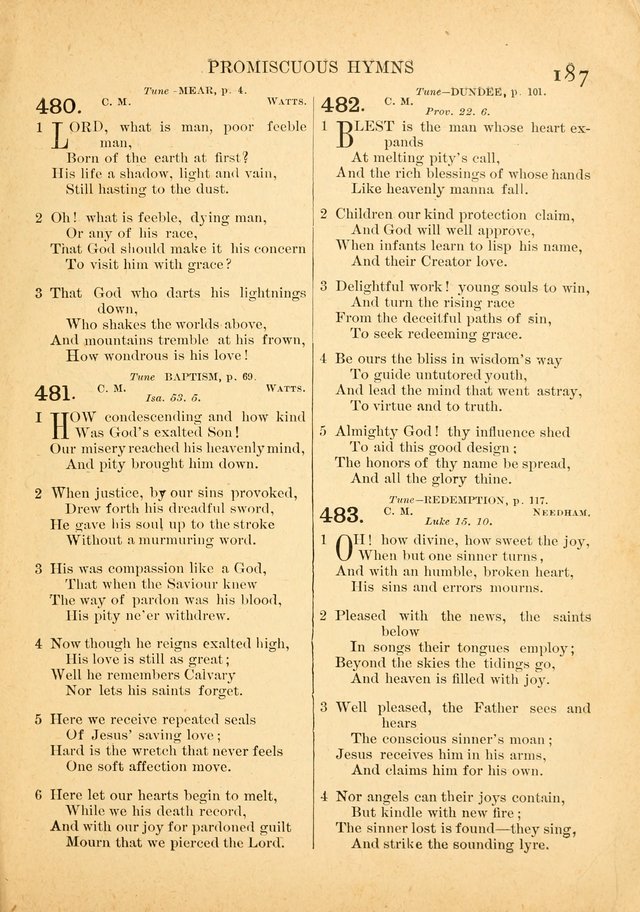 View Page
The Primitive Baptist Hymnal: a choice collection of hymns and tunes of early and late composition (1881), p.187
^ top

A Collection of Hymns and a Liturgy #348

A Collection of Hymns and A Liturgy #348

A Collection of Psalms and Hymns for the use of Universalist Societies and Families (13th ed.) #547

A Collection of Psalms and Hymns for the Use of Universalist Societies and Families 16ed. #547

A New Selection of Psalms, Hymns and Spiritual Songs #920

A Selection of Hymns from the Best Authors, intended to be an Appendix to Dr. Watts' Psalms & Hymns. 2nd Baltimore ed. #aDXXIII

A Selection of Hymns from the Best Authors. #523

A Selection of Hymns, adapted to the devotions of the closet, the family, and the social circle; and containing subjects appropriate to the monthly concerns of prayer for the success... #67

A Selection of Hymns #DXXIII

Hymns for Youth, Suitable to be Used in Sabbath and Parochial Schools #259

Hymns, Selected and Original, for Public and Private Worship #666

Psalms and Hymns, for the Use of the German Reformed Church, in the United States of America. (2nd ed.) #340

Display Title: Charity First Line: Blest is the man whose heart expands Meter: C. M. Date: 1834 Subject: Charity |
Psalms and Hymns, for the Use of the German Reformed Church, in the United States of America. (2nd ed.) #340

Psalms, Hymns, and Spiritual Songs #B159

The Christian Psalmist; or, Watts' Psalms and Hymns #422

The Halifax Selection of Hymns #d60

The Providence Selection of Hymns, Supplementary to Dr. Watts. #d41

The Psalms and Hymns, with the Catechism, Confession of Faith, and Liturgy, of the Reformed Dutch Church in North America #121

The Psalms and Hymns, with the Doctrinal Standards and Liturgy of the Reformed Protestant Dutch Church in North America #H458

The Virginia Selection of Psalms and Hymns and Spiritual Songs #610