3 Extol the Lamb of God,
the sacrificial Lamb;
redemption thro' his blood
throughout the world proclaim: [Refrain]


4 Ye slaves of sin and hell,
your liberty receive;
and safe in Jesus dwell,
and blest in Jesus live: [Refrain]


5 Ye who have sold for naught
your heritage above,
receive it back unbought,
the gift of Jesus' love: [Refrain]


6 The gospel trumpet hear,
the news of heav'nly grace;
and, saved from earth, appear
before your Savior's face: [Refrain]

Extol the Lamb of God,
The all-atoning Lamb.

This was changed to:—

Extol the Lamb of God,
The sin atoning Lamb.

The heated controversy between the Wesleys and Toplady on the questions, vital to them, of Arminianism and Calvinism gave point and meaning to this change. From Toplady's Psalms & Hymns, the text and arrangement of stanzas were taken by other compilers until the hymn acquired universal reputation as his composition. In 1830, it was included with three alterations in the Supplement to the Wesleyan Hymn Book, No. 645, and the error of authorship was rectified. In the revised edition of the Wesleyan Hymn Book, 1875. two of the alterations are repeated: stanza iv., lines 3, "blest," for "bless'd"; and stanza v., "Receive if," for "Shall have it," &c. In varying forms, sometimes, as in Toplady, then as in the Wesleyan Hymn Book, and again in some other shape, this hymn is in very extensive use in all English-speaking countries. Original text in Poetical Works, 1868-72, vol. vi. p. 12.

All tunes published with 'The Jubilee'^ top 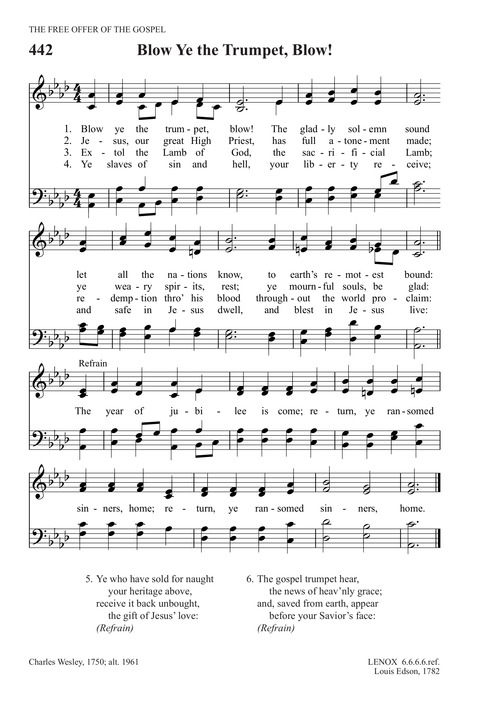