Bright and Glorious Is the Sky 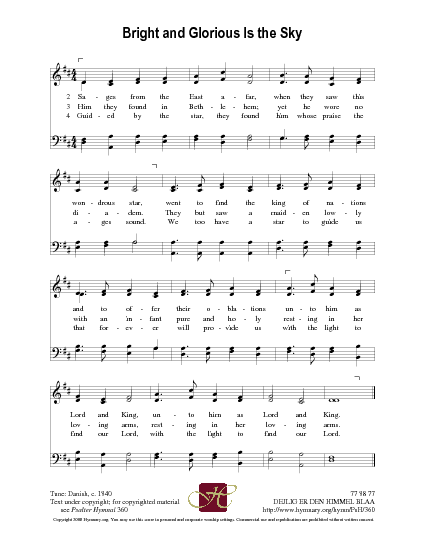 Bright and glorious is the sky 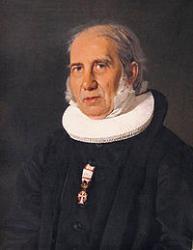 Nicolai Frederik Severin Grundtvig was the son of a pastor, and was born at Udby, in Seeland, in 1783. He studied in the University of Copenhagen from 1800-1805; and, like some other eminent men, did not greatly distinguish himself; his mind was too active and his imagination too versatile to bear the restraint of the academic course. After leaving the university he took to teaching; first in Langeland, then (1808) in Copenhagen. Here he devoted his attention to poetry, literature, and Northern antiquities. In 1810 he became assistant to his father in a parish in Jutland. The sermon he preached at his ordination, on the subject "Why has the Lord's word disappeared from His house," attracted much attention, which is rarely the case with "pro… Go to person page >
^ top

The great Danish hymn writer Nikolai F. S. Grundtvig (b. Udby, Denmark, 1783; d. Vartov, Denmark, 1872) wrote this hymn for Christmas, 1810. One of his earliest texts, it was first published in Knud L. Rahbek's Sandsigeren on April 10, 1811. Based on the Epiphany gospel (Matt. 1: 1-11), the text speaks about the wise men coming from the East and being led by the star to worship the Christ child (st. 14a). It compares the light of the star to the Bible–the light that leads us to the Christ (st. 4b-5).

Grundtvig was a famous Danish preacher, educator, and hymn writer. Although he had studied theology at the University of Copenhagen, because of the influence of rationalist theology he lost his faith. After a period of intense spiritual reflection he regained both his faith and renewed appreciation for his orthodox Lutheran heritage. His ordination in 1811 was delayed for a year because he preached a sermon in which he criticized the rationalist theology of the Danish clergy. Later he experienced other confrontations with the established church leaders and for some ten years did not have a regular parish. But in 1839 he was appointed pastor to Vartov. An effective preacher and a much-loved author of hymns, Grundtvig finally was accepted by the church and upon his golden jubilee was given the title of bishop.

The most influential and prolific writer of devotional poems and orthodox hymns in nineteenth-century Scandinavia, he published two significant hymnals, Sang-Vark til den Danske Kirke (1837) and Festsalmer (1850). All of his hymns and poems were published posthumously in five volumes. As an educator Grundtvig was instrumental in initiating public high schools in some Danish cities and raising educational standards; these schools became very popular and were copied in neighboring countries. Consequently Grundtvig is often called the "father of public schools" in Scandinavia.

The translation combines Jens C. Aaberg's translation from the Hymnal for Church and Home (1927) and Fred C. M. Hansen's and Thorvald O. Burntvedt's from the Service Book and Hymnal (1958). Aaberg (b. Moberg, Denmark, 1877; d. Minneapolis, MN, 1970) immigrated to the United States in 1901. Educated at Grand View College and Seminary in Des Moines, Iowa, he entered the ministry of the Danish Evangelical Lutheran Church in America and served congregations in Marinette, Wisconsin; Dwight, Illinois; and Minneapolis, Minnesota. Aaberg wrote Hymns and Hymnwriters of Denmark (1945), translated at least eighty hymns from Danish into English, and served on four hymnal committees. In 1947 King Frederick of Denmark awarded him the Knight Cross of Denmark.

Liturgical Use:
Epiphany Sunday; stanza 5 could be sung just prior to the reading of Scripture.

All tunes published with 'Bright and Glorious Is the Sky'^ top