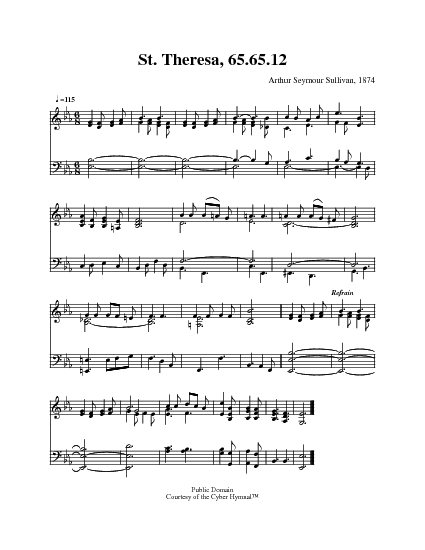 1 Brightly gleams our banner,
Pointing to the sky,
Waving on Christ's soldiers
To their home on high.
Marching through the desert,
Gladly thus we pray,
Still with hearts united,
Singing on our way.


Refrain:
Brightly gleams our banner,
Pointing to the sky,
Waving on Christ's soldiers
To their home on high.


2 Jesus, Lord and Master,
At Thy sacred feet,
Here, with hearts rejoicing
See Thy children meet.
Often have we left Thee,
Often gone astray;
Keep us, mighty Saviour,
In the narrow way. [Refrain]


3 Pattern of our childhood,
Once Thyself a child,
Make our childhood holy,
Pure, and meek, and mild.
In the hour of danger
Whither can we flee,
Save to Thee, dear Saviour,
Only unto Thee? [Refrain]

Potter, Thomas Joseph, was born at Scarborough in 1827, and joined the Roman Catholic Church in 1847, and subsequently took Holy Orders. For many years he filled the Chair of Pulpit Eloquence and English Literature in the Foreign Missionary College of All Hallows, Dublin. He published The Spoken Word; or, The Art of Extemporary Preaching; Sacred Eloquence, or, The Theory and Practice of Preaching; and The Pastor and his People; together with several tales. He translated the Vesper hymns in the Catholic Psalmist; contributed to the Holy Family Hymns, 1860; and published Legends, Lyrics, and Hymns, 1862. His most widely-known hymn is "Brightly gleams our banner" (q.v.). Several of his hymns and translations are in use in Roman Catholic hymn… Go to person page >
^ top

Brightly gleams our banner. T. J. Totter. [Processional.] This hymn, which has attained to great popularity, is found in various forms, the most widely used of which are:—
1. The original, which appeared, with music, in The Holy Family Hymns, I860, No. 5, in 8 stanzas of 8 lines, and a chorus of 4 lines. This is distinctly Roman in every way, as will be gathered from stanzas iii. and v., which read

(iii.) Mary, Mother, Ave!
Israel's lily hail! Comfort of thy children
In this sinful vale.
'Mid life's surging ocean,
Whither shall we flee,
Save, O stainless Virgin,
Mother, unto thee?

(v.) Jesus! Mary! Joseph!
Sweet and holy Three!
List the praise we pay you
On our bended knee.
May we sing your glory
In glad realms above;
Save, 0 stainless Virgin,
Bound for ever to you,
By the bonds of love."

This text is repeated in numerous Roman Catholic hymnals for schools and missions,and maybe consulted without any difficulty.
2. The text as in the People's Hymnal, 1867, No. 1, was given in Walker's Appendix to the Hymnal Noted, 1863. This is the nearest approach to the original, but is not in extensive use.
3. The third and most popular text is that which appeared in the 1867 Appendix to Morrell and How, and was repeated in the Appendix to Hymns Ancient & Modern, 1868. In this the only portions of the original which are retained are stanzas i. and ii. (with considerable alterations) and the chorus, which is simply the opening lines repeated.
4. In the Appendix to the Society for Promoting Christian Knowledge Psalms and Hymns, 1860, No. 421, this text is distinguished by the third stanza, “Pattern of our childhood," &c. It was repeated in Church Hymns, 1871, Mrs. Brock's Children's Hymn Book, 1881, Thring's Collection, 1882, and many others. It has less of the original than any other arrangement of the hymn, and ranks next in extensiveness of use to that in Hymns Ancient & Modern. Mr. Ellerton's note to this hymn in the folio edition of Church Hymns is in error by transposing the stanzas which he quotes.
5. The American use of this hymn in any form is very limited. In Richards's Songs of Christian Praise, N.Y., 1880, No. 464, we have stanzas i., ii. and iv., and in Stryker and Main's Church Praise Book, N.Y., 1882, No. 560, stanzas i., iii., and v. from No. 4 as above.
Although in some hymnals slight changes of these varying texts may be found, yet they are the generally accepted forms of the hymn. Taken together its use is very extensive; the revised versions, however, far outnumbering the original in use.

All tunes published with 'Brightly Gleams Our Banner'^ top

The Church Hymnal: revised and enlarged in accordance with the action of the General Convention of the Protestant Episcopal Church in the United States of America in the year of our Lord 1892. (Ed. B) #515c 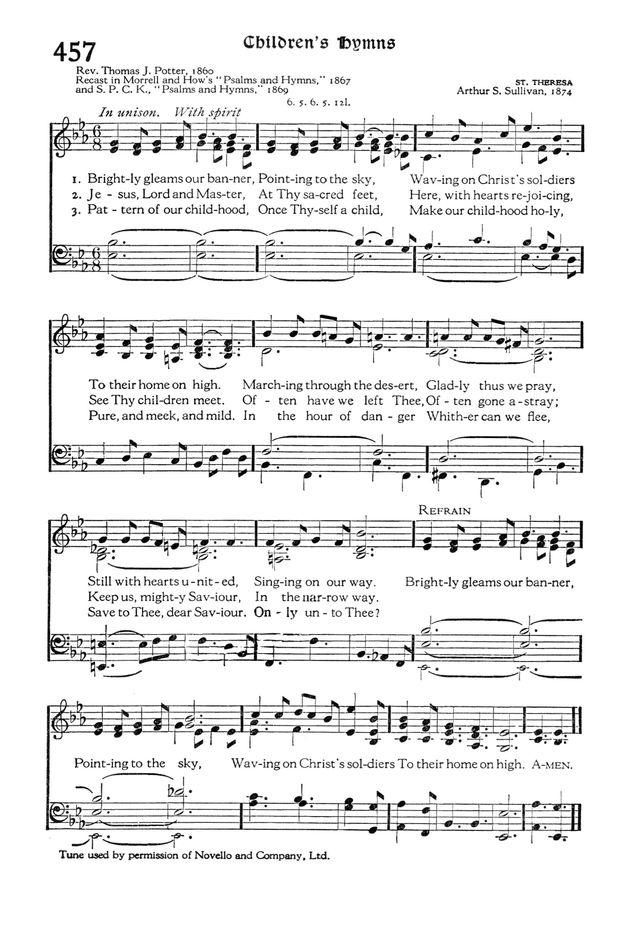