By Adam's Fall Is All Forlorn

By Adam's fall is all forlorn 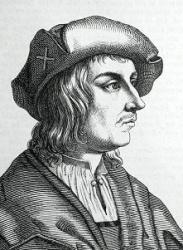 Spengler, Lazarus, was the 9th of the 21 children of Georg Spengler and Agnes his wife, and was born March 13,1479, at Nürnberg, where his father was clerk of the Imperial court of Justice (Landgerichtschreiber). He entered the University of Leipzig in 1494; but on the death of his father on Dec. 27, 1496, he returned to Nürnberg, obtained a position in the town clerk's office, in 1507 became himself town clerk (Raths Syndikus), and in 1516 also Rathsherr. When Luther was passing through Nürnberg, in 1518, on his way to Augsburg, Spengler made his acquaintance. He warmly espoused the Reformation doctrines, published in 1519 his Schutzre in Luther's favour, and himself became one of the leaders in the Reformation work at Nürnberg. He was… Go to person page >

(no biographical information available about G. A. Zeisler.) Go to person page >
^ top

All tunes published with 'By Adam's Fall Is All Forlorn'^ top