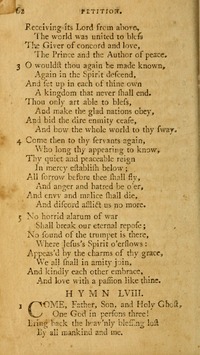 1 Come, Father, Son, and Holy Ghost,
One God in person three,
Bring back the heav'nly blessing lost
By all mankind and me.


2 Thy favour, and thy nature too,
To me, to all restore;
Forgive, and after God renew,
And keep us evermore.


3 Eternal Sun of Righteousness,
Display thy beams divine,
And cause the glories of thy face
Upon my heart to shine.


4 Light in thy light O may I see,
Thy grace and mercy prove!
Reviv'd and cheer'd, and blest by thee,
The God of pard'ning love!


5 Lift up thy countenance serene,
And let thy happy child
Behold, without a cloud between,
The Godhead reconcil'd!


6 That all comprising peace bestow
On me, through grace forgiv'n;
The joys of holiness below,
And then the joys of heav'n!

Source: A Pocket hymn-book, designed as a constant companion for the pious: collected from various authors (11th ed.) #LVIII

All tunes published with 'The Benediction'^ top 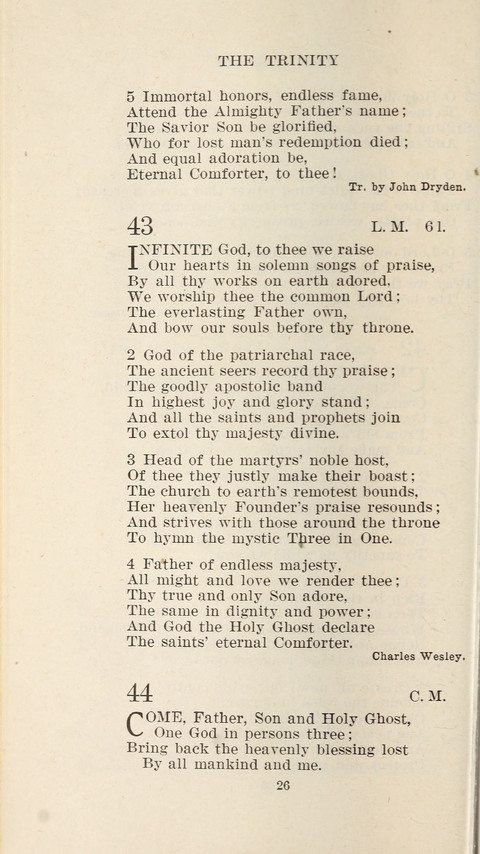 A Collection of Hymns for Public, Social, and Domestic Worship #949

Display Title: The Godhead reconciled First Line: Come, Father, Son, and Holy Ghost Meter: C. M. Date: 1872 Subject: The Christian Life | Adoption and Assurance
A Collection of Hymns for the use of the African Methodist Episcopal Zion Church in America #465

A Collection of Hymns, for the Use of the People Called Methodists, with a Supplement #252

A Collection of Hymns #L243

A Pocket Hymn Book, Designed as a Constant Companion for the Pious, Collected from Various Authors. 28th ed. #aLVIII

A Pocket hymn book, designed as a constant companion for the pious #LVIII

A Pocket hymn-book, designed as a constant companion for the pious #LVIII

Hymn and Tune Book of the Methodist Episcopal Church, South (Round Note Ed.) #786

Hymns for the Use of the Methodist Episcopal Church. Rev. ed. #465

The Hymn Book of the African Methodist Episcopal Church #930

The Hymn Book of the Free Methodist Church #43