Come, Let Us Join Our Friends Above

Come, let us join our friends above

1. Come, let us join our friends above
who have obtained the prize,
and on the eagle wings of love
to joys celestial rise.
Let saints on earth unite to sing
with those to glory gone,
for all the servants of our King
in earth and heaven are one.


2. One family we dwell in him,
one church above, beneath,
though now divided by the stream,
the narrow stream of death;
one army of the living God,
to his command we bow;
part of his host have crossed the flood,
and part are crossing now.


3. Ten thousand to their endless home
this solemn moment fly,
and we are to the margin come,
and we expect to die.
E'en now by faith we join our hands
with those that went before,
and greet the blood-besprinkled bands
on the eternal shore.


4. Our spirits too shall quickly join,
like theirs with glory crowned,
and shout to see our Captain's sign,
to hear his trumpet sound.
O that we now might grasp our Guide!
O that the word were given!
Come, Lord of Hosts, the waves divide,
and land us all in heaven.

Come, let us join our friends above. C. Wesley. [Communion of Saints.] First published in his Funeral Hymns, 2nd Series, 1759, No. 1, in 5 stanzas of 8 lines, and entitled, "A Funeral Hymn." Although it was not included in the Weslayan Hymn Book until the addition of the Supplement in 1830, it had been in common use outside of Methodism for many years before, and was well known, especially through stanza ii.:—

”One family we dwell in Him,
One church above, beneath.
Though now divided by the stream,
The narrow stream of death;
One army of the living God,
To His command we bow:
Part of His host have crossed the flood.
And part are crossing now."

The use of the hymn, either in full or in an abbreviated form, has extended to all English-speaking countries. Orig. text in Poetical Works1868-72, vol. vi. p. 215; and notes of some interest concerning spiritual benefits derived by many from the hymn, in Stevenson's Methodist Hymn Book Notes, 1883, p. 561.
In addition to the use of the original text in its full, or in an abridged form, there are also the following hymns which are derived therefrom:—
1. "The saints on earth and those above." This appeared in the Appendix to the 6th edition of Cotterill's Selection, 1815, No. 227; in Montgomery's Christian Psalmist, 1825; and in several modern hymn-books. It is composed as follows:
—Stanza i. From I. Watts's Hymns & Sacred Songs, 1709, Bk. ii., No. 152, stanza v., which reads:—

"The saints on earth and all the dead
But one communion make;
All join in Christ, their living head,
And of His grace partake."

This is altered to:—

”The saints on earth and those above
But one communion make:
Joined to their Lord in bonds of love.
All of His grace partake."

Stanzas ii.-v. are stanzas ii., iii., lines 1-4, and v., lines 4-8, of "Come, let us join," &c, slightly altered. In the Society for Promoting Christian Knowledge Church Hymns the last line of the cento is altered, and in Thring's Collection, 1882, the last three lines are by Prebendary Thring.
2. "Let saints below join saints above." This appeared in Murray's Hymnal, 1852, No. 127, and is C. Wesley's text partly rewritten, and reduced to 6 stanzas of 4 lines
3. "Let saints on earth in concert sing." This, as given in Hymns Ancient & Modern in 1861 and 1875, is Murray's arrangement of Wesley's text as above with the omission of stanza 1. This is altered in the Harrow School Hymns, 1857, to "Let all below in concert sing."
4. "Come, let us join our friends above, whose glory is begun." This, in the Marlborough College Hymns, 1869, No. 104, is C. Wesley's text somewhat altered, and with many of the lines transposed.
The combined use of the original and these altered forms of the text is very extensive in all English-speaking countries.

All tunes published with 'Come, Let Us Join Our Friends Above'^ top 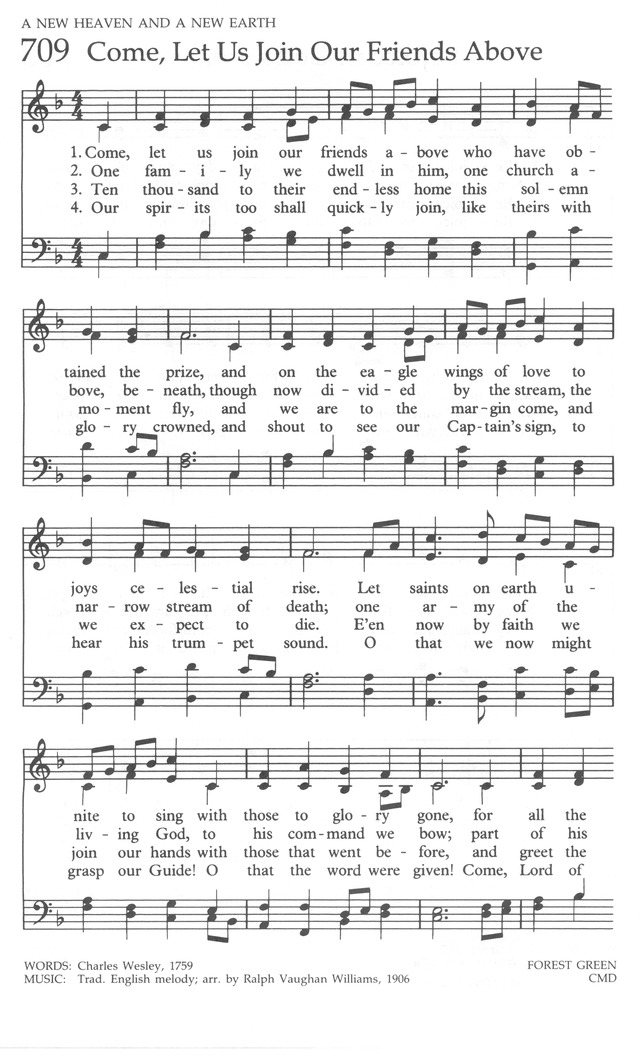