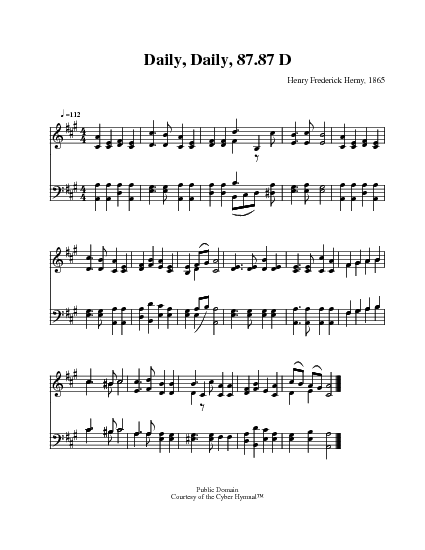 1 Daily, daily sing the praises
Of the City God hath made;
In the beauteous fields of Eden
Its foundation stones are laid:
O that I might hear the angels
Singing o'er the crystal sea,
And amidst the fields of Eden
Find a home prepared for me!


2 All the walls of that dear City
Are of bright and burnished gold;
It is matchless in its beauty,
And its treasures are untold.
O that I might, etc.


3 There are sounds of many voices
In the golden streets above,
Filling all the air with gladness,
Blended in eternal love.
O that I might, etc.


4 In those quiet resting places,
Midst the pastures green and fair,
Jesus gathers in the homeless,
And He dwells among them there.
O that I might, etc.


5 Can we see the happy faces
Of the dear ones gone before?
They are ready now to greet us
When we gain that blessed shore.
O that I might, etc.


6 Then the pearly gates, unfolding,
Never shall be closed again,
We shall see within the City
Jesus, 'mid His white-robed train.
O that I might, etc.


7 O I would my ears were open
Here to catch that happy strain!
O I would my eyes some vision
Of that Eden could attain!
O that I might, etc.

Source: The Church Hymnal: containing hymns approved and set forth by the general conventions of 1892 and 1916; together with hymns for the use of guilds and brotherhoods, and for special occasions (Rev. ed) #588

Daily, daily sing the praises. S. Baring-Gould. [Processional .] This popular processional was written in 1865, and printed on a card for St. John's Mission, Horbury Bridge, Yorkshire. It was again printed in the Church Times , 1865, and subsequently included in the People's Hymnal, 1867, and other collections. Its use has also extended to some of the American hymn-books. In connection with the Uganda mission a short time before the murder of Bishop Hannington, the following touching circumstance is recorded in the Rock, Sept. 18, 1885, as having taken place in January, 1885. Two native lads who had been kidnapped, but subsequently released, reported—

”That they had been taken with Kakumba and Ashe's boy, as also Serwanga, a tall, fine fellow, a baptised lad whom Majasi [the leader of the hostile party] had caught, and Duta's wife Sarah and her child, to a place outside the capital. That Serwanga, Kakumba, and Ashe's boy had been tortured by having their arms cut off, and were then bound alive to a scaffolding, under which a fire was made, and they were slowly burnt to death. Majasi and his men mocked them, and bade them pray now if Isa Masiya [Jesus Christ] would rescue them from his hands. The dear lads clung to their faith, and in the fire they sang, Killa siku tunsifu (the hymn, ‘Daily, daily sing the praises’)."

All tunes published with 'Daily, daily sing the praises'^ top 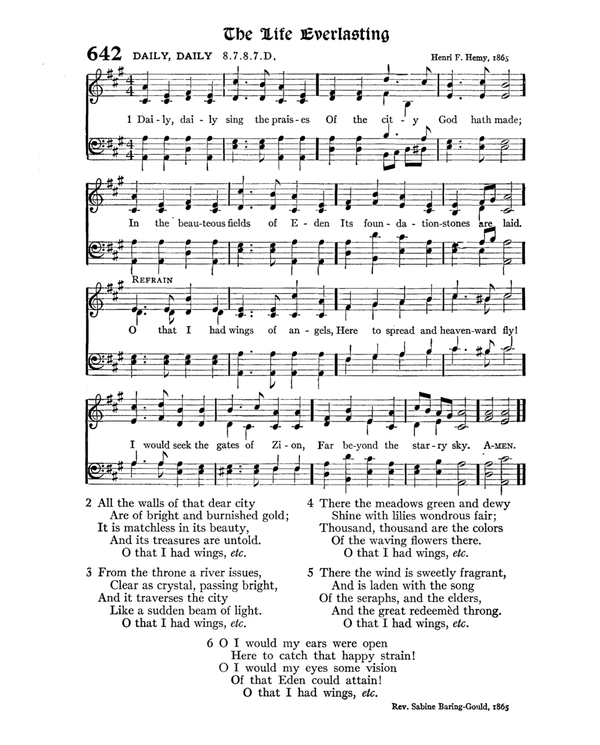