Day of Judgment! Day of Wonders! 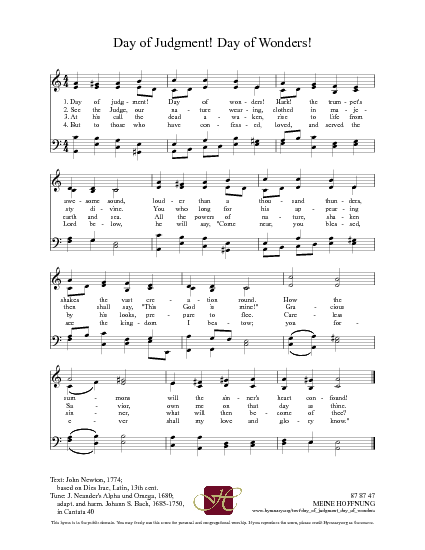 Day of judgment! day of wonders!

1 Day of judgment! Day of wonders!
Hark! the trumpet's awful sound,
louder than a thousand thunders,
shakes the vast creation round.
How the summons
will the sinner's heart confound!


2 See the Judge, our nature wearing,
clothed in majesty divine;
you who long for his appearing
then shall say, "This God is mine!"
Gracious Savior,
own me in that day as thine.


3 At his call the dead awaken,
rise to life from earth and sea;
all the pow'rs of nature, shaken
by his looks, prepare to flee.
Careless sinner,
what will then become of thee?


4 But to those who have confessed,
loved and served the Lord below,
he will say, "Come near, ye blessed,
see the kingdom I bestow;
you forever
shall my love and glory know."

John Newton (PHH 462) wrote this text during "the most of two days" in 1774, and it was published in the Olney Hymns (1779). The Psalter Hymnal includes the original stanzas 1-3 and 6. Newton's text borrows phrases and concepts from the thirteenth-century Latin sequence "Dies irae, dies illa," which has sometimes been attributed to Thomas of Celano (without specific evidence), a friend of Francis of Assisi. The "Dies irae" became part of the Roman Catholic Requiem Mass and was often included in dramatic musical settings that emphasized the judgment of sinners. Many of the various popular English translations of that ancient Latin text begin with the words, "Day of wrath, O day of mourning."

Although the "Dies irae" holds out judgment for the unrepentant sinner, it also contains prayers for mercy for the believer. Newton clearly announces the judgment of God on sin and sinners in his hymn text (st. 1, 3), but he also transforms the original prayers for mercy into comforting words of assurance for believers in Christ (st. 2, 4). The text concludes with a paraphrase of Jesus' words in Matthew 25:34, "Come, you who are blessed by my Father; take your inheritance, the kingdom prepared for you since the creation of the world."

Liturgical Use:
Advent; other worship that focuses on Christ's return in glory "to judge the living and the dead."

”’Sunday, 26th, spoke in the evening from a hymn on the day of judgment.' This hymn, he says previously, took him the most of two days to finish."

The quotation “Sunday, 26th," &c. [June 26th, 1775] is from Newton's Diary. Few of our author's hymns have attained to greater popularity than this both in Great Britain and America. It has been translated into several languages, including Latin (stanzas i.-iii., vi.): "Dies mirandorum! dies," in Bingham's Hymnologia Christiana Latina, 1871. Original text in Lyra Britannica, 1807, p. 440.

All tunes published with 'Day of Judgment! Day of Wonders!'^ top 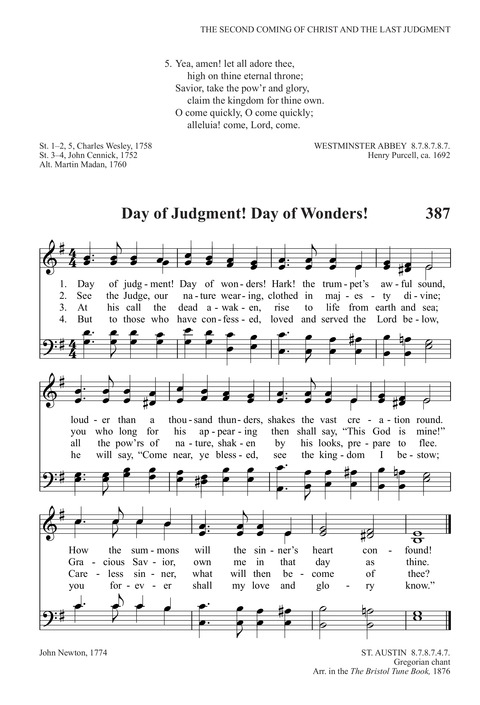 The Song Book of the Salvation Army #875