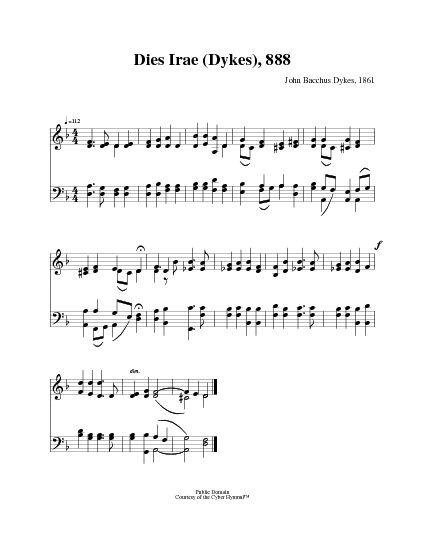 1 Day of wrath, O day of mourning!
See fulfilled the prophet's warning:
Heav'n and earth in ashes burning.
Wondrous sound the trumpet flingeth,
Through earth's sepulchers it ringeth,
All before the throne it bringeth.
O what fear man's bosom rendeth
When from heav'n the Judge descendeth
On whose sentence all dependeth.


2 Death is struck and nature quaking;
All creation is awaking,
To its Judge an answer making.
Lo, the book, exactly worded,
Wherein all hath been recorded;
Thence shall judgment be awarded.
When the Judge His seat attaineth,
And each hidden deed arraigneth,
Nothing unavenged remaineth.


3 What shall I, frail man, be pleading,
Who for me be interceding
When the just are mercy needing?
King of Majesty tremendous,
Who dost free salvation send us,
Fount of pity, then befriend us!
Righteous Judge, for sin's pollution
Grant Thy gift of absolution
Ere the Day of Retribution.


4 Faint and weary Thou hast sought me,
On the cross of suff'ring bought me;
Shall such grace be vainly brought me?
Think, good Jesus, my salvation
Caused Thy wondrous incarnation;
Leave me not to sin's damnation!
Guilty now I pour my moaning,
All my shame with anguish owning:
Hear, O Christ, Thy servant's groaning!


5 Bows my heart in meek submission,
Strewn with ashes of contrition;
Help me in my last condition!
Worthless are my prayers and sighing;
Yet, Good Lord, in grace complying,
Rescue me from fires undying.
Thou the sinful woman savedst;
Thou the dying thief forgavest;
Thus to me true hope vouchsafest!


6 With Thy favored sheep then place me,
Nor among the goats abase me,
But to Thy right hand upraise me.
While the wicked are confounded,
Doomed to flames of woe unbounded,
Call me, with Thy saints surrounded.
To the rest Thou didst prepare me
On Thy cross; O Christ, upbear me!
Spare, O God, in mercy spare me.

Thomas of Celano was born at Celano in the Abruzzi, and joined St. Francis of Assisi c. 1214. He was commissioned by Gregory IX to write the life of St. Francis: the First Legend, 1229; the Second Legend, 1247; and the Tract on the Miracle of St. Francis a few years later. His Legend of St. Clare was composed in 1255. He was probably among the first band of friars to visit Germany, 1221. --The Hymnal 1940 Companion… Go to person page >

Irons, William Josiah, D.D., son of Joseph Irons, was born at Hoddesdon, Herts, Sep. 12, 1812, and educated at Queen's College, Oxford (B.A. 1833, D.D. 1854), and took Holy Orders 1835. In 1837 he became Incumbent of St. Peter's, Walworth, and was subsequently Vicar of Barkway, Incumbent of Brompton, Rector of Wadingham; and in 1872, Rector of St. Mary-Woolnoth, formerly held by his father's friend, John Newton. He was also Bampton Lecturer in 1870, and Prebendary of St. Paul's Cathedral. He died June 18, 1883. Dr. Irons took a somewhat prominent part in the ecclesiastical controversies of his day, and published extensively thereon in the form of Sermons, Letters, Pamphlets, &c. His important work, the Bampton Lectures, 1870, was on Christi… Go to person page >
^ top

Day of wrath, 0 day of mourning. By W. J. Irons, from the Paris Missa. It is well known that the Revolution in Paris in 1848 led to many scenes of terror and shame. Foremost was the death of Monseigneur D. A. Affre, the Archbishop of Paris, who was shot on June 25 on the barricades on the Place de la Bastille whilst endeavouring to persuade the insurgents to cease firing, and was buried on July 7. As soon as it was safe to do so his funeral sermon was preached in Notre Dame, accompanied by a religious service of the most solemn and impressive kind. Throughout the service the Archbishop's heart was exposed in a glass case in the Choir, and at the appointed place the Dies Irae was sung by an immense body of priests. The terror of the times, the painful sense of bereavement which rested upon the minds of the people through the death of their Archbishop, the exposed heart in the Choir, the imposing ritual of the service, and the grand rendering of the Dies Irae by the priests, gave to the occasion an unusual degree of impressiveness. Dr. Irons was present, and deeply moved by what he saw and heard. On retiring from the Church he wrote out this translation of the Dies Irae. The surrounding circumstances no doubt contributed greatly to produce this, which is one of the finest of modern renderings of the grandest of mediaeval hymns. It was first issued in the privately printed Introits and Hymns for Advent, issued, without date, for the use of Margaret Street Chapel, London, where it bears the initials "W. J. I." It was also published in 1849 (Lond., Masters), with historical notes by Dr. Irons, and with the music to which it was sung in Notre Dame, harmonized by Charles Child Spencer. Dr. Irons also included it in his Appendix to the Brompton Met. Psalter, in his Hymns, &c, Brompton, 1866, No. 82, and in the new and enlarged edition of his Psalms & Hymns, 1873-1883, No. 60. In popularity and extensiveness of use this translation of the Dies Irae is surpassed only by Sir Walter Scott's. A few important changes have come into use which must be noted. The opening stanza i:—

"Day of wrath, 0 day of mourning,
See once more the Cross returning—
Heav'n and earth in ashes burning!"

This is given in J. A. Johnston's English Hymnal 1852, as "Day of wrath, 0 day dismaying," &c.; in Thrupp's Psalms & Hymns, 1853, as "Day of Judgment, day of mourning "; and in Kennedy, 1863, as "Day of anger, day of mourning.” The second line of stanza i. has also undergone these changes:—in the Salisbury Hymn BookThe thought, however, is changed in the Hymnal Companion and Snepp, where we read, "See the Crucified returning." In Hymns Ancient & Modern the reading of the Roman Missal is adopted in spirit although not in word, "See fulfilled the prophet's warning," and this has been repeated in several hymn-books. The concluding lines which read:—

"Lord, who didst our souls redeem,
Grant a blessed Requiem!"

were changed in the Hymns and Introits, 1852, and the Cooke and Denton Hymnal, 1853, to the translation by I. Williams:—

This, with "Grant us," for "Grant them," has been repeated, sometimes with and sometimes without the change, in most hymn-books which have adopted Dr. Irons's translation Thring's Collection is an exception in favour of:—

”Jesu, Saviour ever Blest,
Grant us then eternal rest."

All tunes published with 'Day of wrath! O day of mourning!'^ top 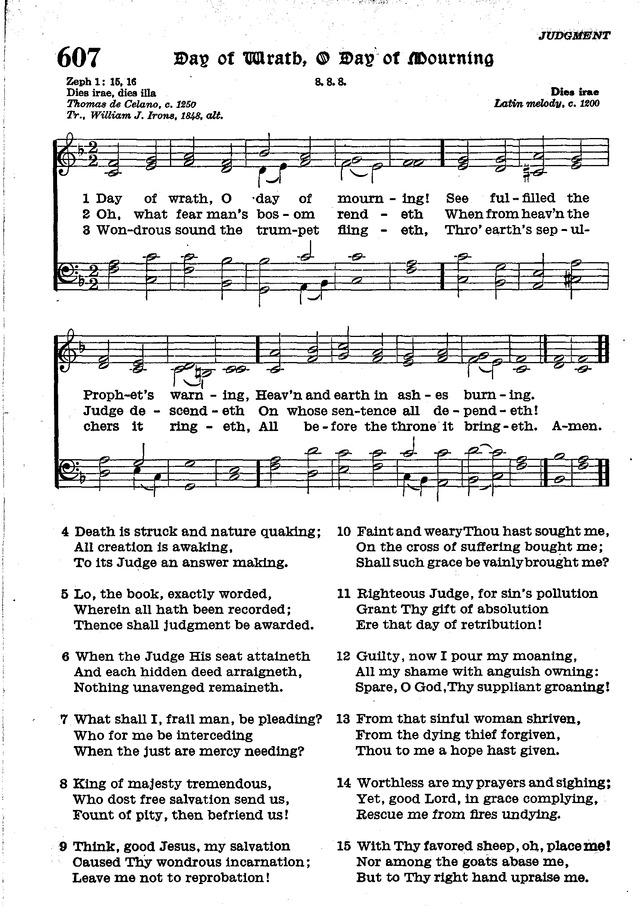