Depth of mercy! can there be

Depth of mercy! can there be

1 Depth of mercy! Can there be
mercy still reserved for me?
Can my God His wrath forbear?
Me, the chief of sinners, spare?


2 I have long withstood His grace:
long provoked Him to His face;
would not hearken to His calls;
grieved Him by a thousand falls.


3 I my Master have denied,
I afresh have crucified,
oft profaned His hallowed name,
put Him to an open shame.


4 There for me the Savior stands,
shows His wounds and spreads His hands:
God is love! I know, I feel;
Jesus weeps, but loves me still!


5 Now incline me to repent!
Let me now my fall lament!
Now my foul revolt deplore!
Weep, believe, and sin no more.

Source: Hymns to the Living God #81

Depth of mercy, can there be. C. Wesley. [Desiring Mercy and Pardon.] First published in Hymns & Sacred Poems, 1740, and headed "After a Relapse into Sin," in 13 stanzas of 4 lines, Poetical Works, 1868-72, vol. i. p. 271. When included in the Wesleyan Hymn Book, 1780, No. 162, stanza iii. was omitted, and stanza viii. was included in stanza ii., the result being 6 stanzas of 8 lines. This arrangement was continued in later editions, and has passed into other collections, both in Great Britain and America. In Stevenson's Methodist Hymn Book, and its Associations, 1870-83, is an interesting and pathetic account of an actress and her change of life through the instrumentality of this hymn. The account has been repeated in many books and in various forms. It is of American origin, and first appeared, as far as can be traced, in Belcher's Historical Notes on Hymns and Authors. Although possibly true, it lacks authentication. No one has yet ventured to say whether the circumstance occurred in Great Britain or America, or whether it was in the last century or in this. Failing these details, we are not surprised that the names of the town and of the actress are both wanting.


[Depth of mercy, can there be?] (Stevenson)

All tunes published with 'Depth of mercy! can there be'^ top 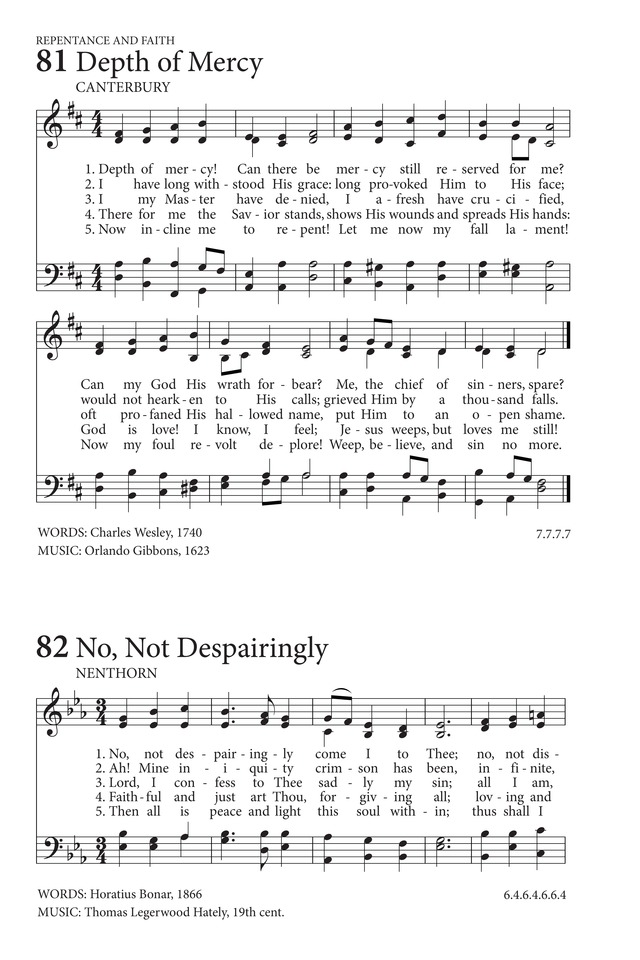 Hymns of the Christian Life #150

Hymns to the Living God #81

The Song Book of the Salvation Army #286