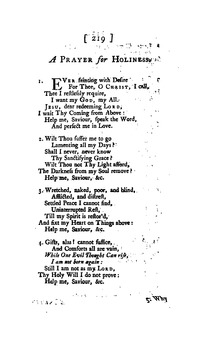 Ever fainting with desire

1 Ever fainting with desire,
For thee, O Christ, I call;
Thee I restlessly require;
I want my God, my all.
Jesus, dear redeeming Lord,
I wait thy coming from above;
Help me, Saviour, speak the word,
And perfect me in love.


2 Wilt thou suffer me to go
Lamenting all my days?
Shall I never, never know
Thy sanctifying grace?
Wilt thou not thy light afford?
The darkness from my soul remove?
Help me, Saviour, speak the word,
And perfect me in love.


3 Thou my life, my treasure be,
My portion here below:
Nothing would I seek but thee--
Thee only would I know;
My exceeding great reward--
My heaven on earth, my heaven above:
Help me, Saviour, speak the word,
And perfect me in love.

Source: The Voice of Praise: a collection of hymns for the use of the Methodist Church #445

Ever fainting with desire. C. Wesley. [Holiness desired.] Appeared in Hymns and Sacred Poems, 1742, p. 219, in 10 stanzas of 8 lines, and headed, "A Prayer for Holiness" (Poetical Works, 1868-72, vol. ii. p. 274). In 1780 it was included in the Wesleyan Hymn Book, No. 344, with the omission of stanzas iii.-vi, and in this form it has been repeated in several hymnbooks. The omitted stanzas contain expressions concerning entire holiness, which gave rise to much controversy, and caused J. Wesley to mark them for omission in later editions of the Hymns & Sacred Poems (Works, vol. x. p. 397; and Poetical Works, vol. ii. p. 274). 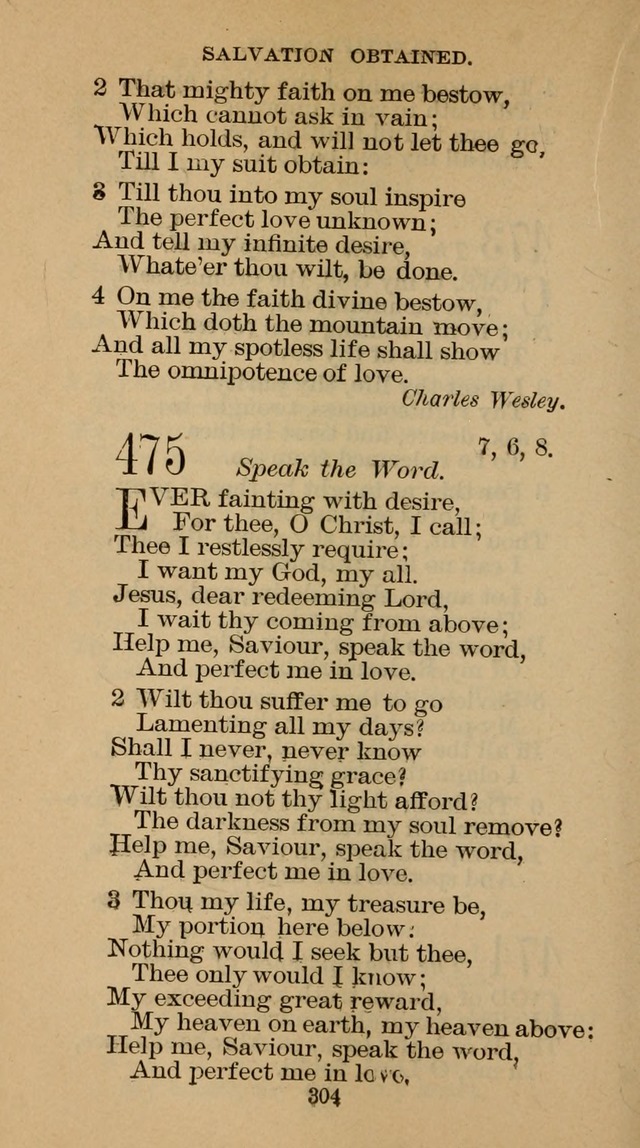 A Collection of Hymns Adapted to the use of the Methodist Episcopal Church Including the Whole Collection of the Rev. J. Wesley #ad121

Display Title: Speak the word First Line: Ever fainting with desire Meter: 12th P. M. 76, 76, 78, 76 Date: 1872 Subject: The Christian Life | Sanctification
A Collection of Hymns for the use of the African Methodist Episcopal Zion Church in America #543

A Collection of Hymns for the use of the Methodist Episcopal Church. Rev. with a Supplement #d128

A Collection of Hymns, for the Use of the People Called Methodists, with a Supplement #354

A New Selection of Hymns #CLVI

A Pocket Hymn Book, Designed as a Constant Companion for the Pious, Collected from Various Authors. 28th ed. #aCIII

A Pocket hymn book, designed as a constant companion for the pious #CIII

A Pocket hymn-book, designed as a constant companion for the pious #CIII

Hymnal of the Methodist Episcopal Church #494

Hymnal of the Methodist Episcopal Church #494

Hymns and Tunes for Prayer and Social Meetings #61

Display Title: Help me, Saviour, speak the word First Line: Ever fainting with desire Date: 1862
Hymns and Tunes for Prayer and Social Meetings #61

Hymns for the Use of the Methodist Episcopal Church. Rev. ed. #543

The Clifton Chapel Collection of "Psalms, Hymns, and Spiritual Songs" #292

The Hymn Book of the Free Methodist Church #475

The Methodist Harmonist, containing a collection of tunes from the best authors, embracing every variety of metre, and adapted to the worship of the Methodist Episcopal Church. New ed. #292.320