1 Father, long before creation
you had chosen us in love,
and that love so deep, so moving,
draws us close to Christ above.
Still it keeps us
firmly fixed in Christ alone.


2 Though the world may change its fashion,
you will still remain the same;
your compassion and your cov'nant
through all ages will remain.
Your own children
shall forever praise your name.


3 Your compassion is our story,
is our boasting all the day;
mercy free and never failing
moves our will, directs our way.
God so loved us
that he gave his only Son.


4 Loving Father, now before you
we shall ever sing your grace,
and our song will sound forever
when we see you face to face,
giving glory
to the Lamb upon the throne.

This anonymous Chinese text was initially used as a theme song by Chinese Christians who kept the faith while the Cultural Revolution was in full swing. The hymn was sung in a Bible-study center in Peking during the winter of 1952-53. In 1953, Bliss Wyant, scholar of Chinese music and culture, gave the text to Francis P. Jones (b. Wisconsin [?] 1890; d. Claremont, CA, 1965 [?]), a missionary to China from 1915 to 1 1950. Jones translated the text into English and published it in the China Bulletin of the National Council of Churches (1953). After it appeared in The Hymnbook in 1955, the text was published in a number of other hymnals.

With various references to Ephesians 1:3-14, the text confesses the Christian faith. That confession is all the more bold when it is seen against the background of the Chinese Cultural Revolution. Stanza 2 states that “Though the world may change its fashion, you will still remain the same.” Stanza 3 concludes with a line from John 3: 16, "God so loved us that he gave his only Son." The entire text affirms God's electing love and redemptive grace and leads to a final stanza in which we sing "glory to the Lamb upon the throne."

Francis P. Jones studied at Wisconsin State College, Northwestern University, the University of Chicago, Garrett Bible Institute, and Union Theological Seminary. After returning from China, he lectured at Drew Theological Seminary in Madison, New Jersey, edited the China Bulletin, translated Christian classics into Chinese, and made lecture tours to Taiwan and Hong Kong, retiring in 1965. His publications include some twenty-six volumes in addition to articles for periodicals and some hymn translations.

Liturgical Use:
As a sung confession of faith in God's electing love.

William H. Monk (PHH 332) composed CORONAE in 1871. The following year it was published in J Ireland Tucker's Hymnal with Tunes Old and New as a setting for Thomas Kelly's text "Look, ye saints, the sight is glorious." That text had "Crown him!" in each stanza, thus the title for this tune. A bar fo…

All tunes published with 'Father, Long before Creation'^ top 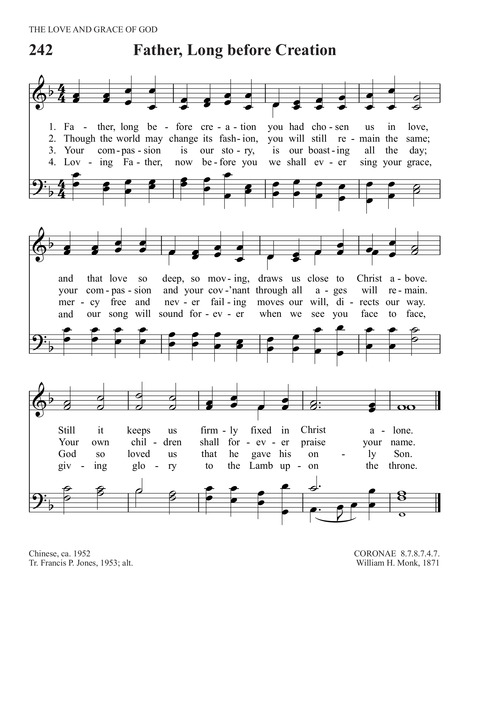 Hymns from the Four Winds #12