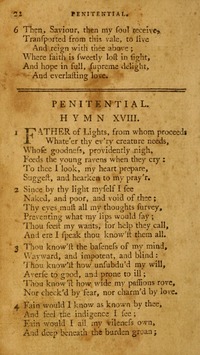 Father of lights, from whom proceeds

1 Father of lights, from whom proceeds
Whate'er thy every creature needs;
Whose goodness, providently nigh,
Feeds the young ravens when they cry;
To thee I look; my heart prepare;
Suggest and hearken to my prayer.


2 Since by thy light myself I see
Naked, and poor, and void of thee,
Thine eyes must all my thoughts survey,
Preventing what my lips would say:
Thou seest my wants; for help they call
And, ere I speak, thou know'st them all.


3 Fain would I know, as known by thee,
And feel the indigence I see;
Fain would I all my vileness own,
And deep beneath the burden groan;
Abhor the pride that lurks within,
Detest and loathe myself and sin.


4 Ah, give me, Lord myself to feel;
My total misery reveal:
Ah, give me Lord, I still would say,
A heart to mourn, a heart to pray:
My business this, my only care--
My life, my every breath, be prayer.

Source: The Voice of Praise: a collection of hymns for the use of the Methodist Church #366

Father of lights, from Whom proceeds. C. Wesley. First published in Hymns & Sacred Poems, 1739, in 8 stanzas of 6 lines, and entitled “A Prayer under Convictions." The first five stanzas were given in the Wesleyan Hymn Book, 1780, as No. 96, and repeated in later editions, and in other collections. Another arrangement appeared in Toplady's Psalms & Hymns, 1776, No. 284, and subsequent editions. It is in 8 stanzas. The first six are from the original as above, and the remaining two are the first and last stanzas of Psalms cxxxix. in the Wesley Hymns & Sacred Poems, 1739. This cento is sometimes found in Church of England hymnals. Original texts, Poetical Works, 1868-72, vol. i. 76, 87.

All tunes published with 'Praying for Repentance'^ top 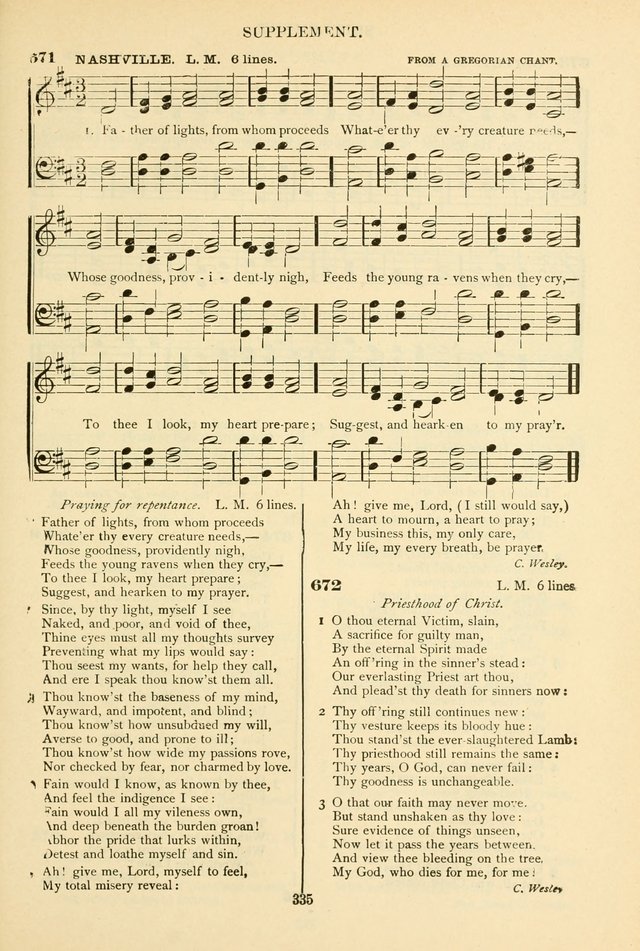 View Page
The African Methodist Episcopal Hymn and Tune Book: adapted to the doctrines and usages of the church (6th ed.) (1902), p.335
^ top

A Choice Selection of Evangelical Hymns, from various authors #213

A Collection of Hymns for Public, Social, and Domestic Worship #372

Display Title: Desiring conviction First Line: Father of lights, from whom proceeds Meter: 1st P. M. 6 lines, 8s. Date: 1872 Subject: The Sinner | Depravity
A Collection of Hymns for the use of the African Methodist Episcopal Zion Church in America #320

A Collection of Hymns, for the Use of the People Called Methodists, with a Supplement #99

A Collection of Hymns #28

A Collection of Hymns #99

A Pocket Hymn Book, Designed as a Constant Companion for the Pious, Collected from Various Authors. 28th ed. #aXVIII

A Pocket hymn book, designed as a constant companion for the pious #XVIII

A Pocket hymn-book, designed as a constant companion for the pious #XVIII

Hymns for the Use of the Methodist Episcopal Church. Rev. ed. #320

The Hymn Book of the African Methodist Episcopal Church #481

The Hymn Book of the Free Methodist Church #357