Father of mercies, in thy house 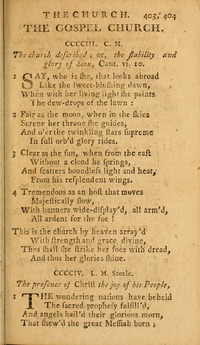 Father of mercies, in thy house

1 Father of mercies, in thy house
Smile on our homage and our vows;
While with a grateful heart we share
These pledges of our Savior's care.


2 The Savior, when to heaven he rose
In splendid triumph o'er his foes,
Scatter'd his gifts on men below,
And wide his royal bounties flow.


4 From Christ their varied gifts derive,
And fed by Christ their graces live;
While guarded by his potent hand,
'Midst all the rage of hell they stand.


5 So shall the bright succession run
Through the last courses of the sun;
While unborn churches by their care
Shall rise and flourish large and fair.


6 Jesus our Lord their hearts shall know,
The spring whence all these blessing flow;
Pastors and people shout his praise
Through the long round of endless days.

Source: A Collection of Hymns and Prayers, for Public and Private Worship #336

Father of mercies, in Thine house. P. Doddridge. [Ordination.] First published in J. Orton's posthumous edition of Doddridge's Hymns, &c, 1755, in 7 stanzas of 4 lines, and headed, "The Institution of a Gospel Ministry from Christ, Eph. iv. 11, 12. For an Ordination." In 1839, it was published from the original manuscript by J. D. Humphreys in his edition of the Hymns, &c, No. 315, as "Father of mercies, in Thy house," and with several additional differences. It is curious that Orton retained the original first line in the index of the 1st edition of the Hymns, &c, but altered it in the body of the book. Orton's text is followed by all compilers. In the Supplement to the Wesleyan Hymn Book, stanzas ii., iii., v.-vii., were given as "The Saviour, when to heaven He rose." This cento is retained in the re¬vised edition, 1875.

Father of mercies, in Thine house, f. 370, i. Since the published of this Dictionary, in 1892 the following facts concerning this hymn have come under our notice:—

At the Ordination of Abraham Tozer at Norwich, June 20, 1745, the sermon was preached by the Rev. R. Frost, and the Charge delivered by Dr. Doddridge. The Sermon and Charge were published together the same year. At the end of the Charge this hymn is printed together with this "Postscript," by Dr. Doddridge:—
"As the Want of Psalms or Hymns, peculiarly suitable to these Occasions, has often been regretted on our ordination days, when we have generally been confined to the 132nd or 133rd Psalms, I was desired by several of my Brethren to publish that which followed this Charge; and I accordingly do it without any further Apology. The Reader will easily perceive it is a Kind of Devoute Paraphrase on Eph. iv. 8 and seq. And it is One of some Hundreds lying by me on a Variety of Scripture Subjects."

The original pamphlet is in the Church House Library. See there Frost, Richard. 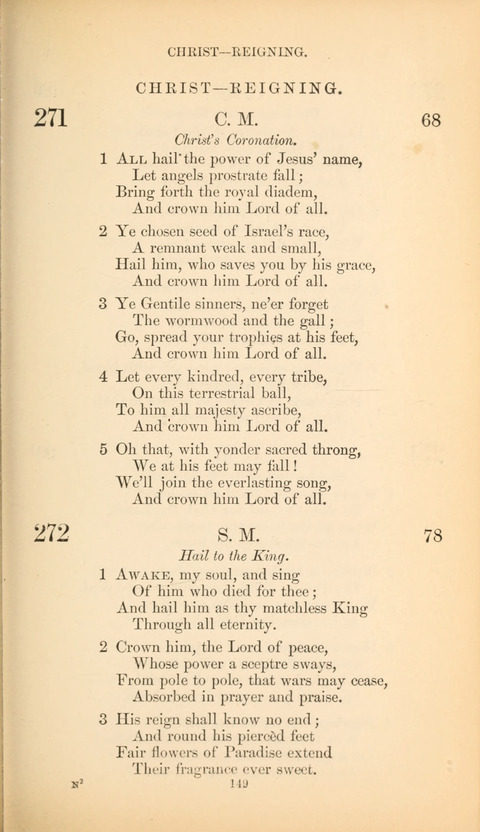 A Baptist Hymn Book, Designed Especially for the Regular Baptist Church and All Lovers of Truth #d199

A Choice Selection of Evangelical Hymns, from various authors #166

A Choice Selection of Evangelical Hymns, from various authors #371

A Collection of Hymns and Prayers, for Public and Private Worship #336

Display Title: The Invitation of a Gospel Ministry from Christ First Line: Father of mercies, in thy house Meter: L. M. Scripture: Ephesians 4:8; Ephesians 4:11-12 Date: 1845 Subject: The Church | Pastoral
A Collection of Hymns and Prayers, for Public and Private Worship #336

A New Selection of Psalms and Hymns from the Most Approved Authors, Adapted to Public and Private Worship. 2nd ed. #d139

A New Selection of Psalms, Hymns and Spiritual Songs #113

A Selection of Hymns #d65

A Selection of Hymns and Spiritual Songs #H.CCCXLIII

A Selection of Hymns and Spiritual Songs #H.CCCXLIII

A Selection of Hymns for the use of social religious meetings, and for private devotions 2d ed. #185

A Selection of Hymns from the Best Authors, intended to be an Appendix to Dr. Watts' Psalms & Hymns. 2nd Baltimore ed. #aCCCCVII

A Selection of Hymns from the Best Authors. #407

Carmina Sanctorum, a selection of hymns and songs of praise with tunes #620

Church Hymn Book; consisting of hymns and psalms, original and selected. adapted to public worship and many other occasions. 2nd ed. #518

Hymns and Songs of Praise for Public and Social Worship #847

Hymns, Selected and Original, for Public and Private Worship #41

Hymns, Selected and Original, for Public and Private Worship #566

Melodies of the Church #d248

Psalms and Hymns, for Social and Private Worship #d140

Select Hymns from Other Authors, Selected Harmony Together with Directions for Musical Expression. 2nd ed. #a145

Selection of Hymns from the Best Authors, intended to be an Appendix to Dr. Watts' Psalms and Hymns. (1st Am. ed.) #CCCCVII

Selection of Hymns, for Public Worship designed to be used with Watts' #65

The Baptist Hymn and Tune Book for Public Worship #804

The Chapel hymn book, with tunes #576

The Providence Selection of Hymns, Supplementary to Dr. Watts. #d79

The Service of Song for Baptist Churches #d209

The Vestry Singing Book #143b

The Virginia Selection of Psalms and Hymns and Spiritual Songs #593