For Thy mercy and Thy grace 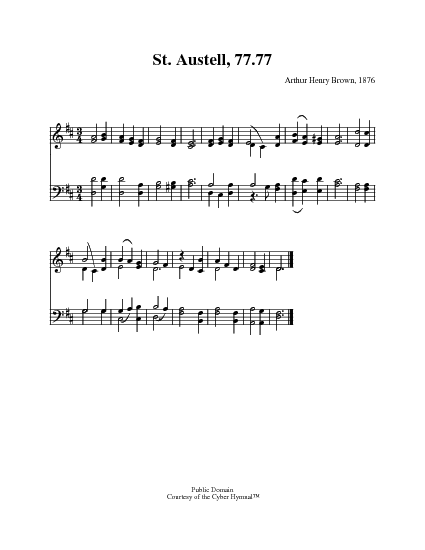 For Thy mercy and Thy grace

1 For thy mercy and thy grace,
faithful through another year,
hear our song of thankfulness;,
Jesus, our Redeemer, hear.


2 In our weakness and distress,
Rock of Strength, be thou our stay;
in the pathless wilderness
be our true and living Way.


3 Keep us faithful, keep us pure,
keep us evermore thine own.
Help, O help us to endure,
fit us for thy promised crown.


4 So within thy palace gate
we shall praise on golden strings
thee, the only potentate,
Lord of lords and King of kings.

Downton, Henry, M.A, son of Mr. John Downton, Sub-Librarian of Trinity College, Cambridge, was born at Pulverbatch, Shropshire, Feb. 12, 1818, and educated at Trinity College, Cambridge, where he graduated B.A. 1840, and M.A. 1843. Taking Holy Orders in 1843, he became Curate of Bembridge, Isle of Wight, 1843, and of Holy Trinity, Cambridge, 1847. In 1849 he was preferred to the Incumbency of St. John's, Chatham. He went to Geneva as English Chaplain in 1857; and was appointed Rector of Hopton in 1873. He was also for some time Domestic Chaplain to the late Lord Monson. He died at Hopton, June 8, 1885. Mr. Downton published a translation of Professor Ernest Naville's Lectures on Modern Atheism, 1865; and Holy Scripture and the Temperance Qu… Go to person page >
^ top

For Thy mercy and Thy grace. H. Downton. [Old and New Year.] Written in 1841, and first published in the Church of England Magazine, in 1843. p. 15, in 7 stanzas of 4 lines, and entitled, "A Hymn for the commencement of the Year." In 1851 it was republished with one alteration, and the omission of stanzas ii. and iii., in A. Tozer Russell's Psalms & Hymns. This was reproduced, with further alterations, in Hymns Ancient & Modern, 1861. Numerous versions exist in modern hymnals, Russell's abridged text, as in the Sarum Hymnal, being most in favour. In 1873 the author included it in its original form, with two unimportant alterations, in his Hymns and Verses, &c, pp. 7, 8. Original text as above, authorised text in Thring's Collection, 1882, and the Westminster Abbey Hymn Book, 1883. The doxology sometimes added thereto as in Church Hymns, 1871, is not in the original and is seldom adopted. The hymn, in its various forms and readings, is the most popular, and most widely used of Mr. Downton's productions.

Orlando Gibbons (PHH 167) composed SONG 13 in soprano and bass parts. Used as a setting for a text from the Song of Songs, the tune was published in George Withers' Hymnes and Songs of the Church (1623) as hymn number 13 (hence the tune name). As in other hymnals, the melody is presented in a simpli…

All tunes published with 'For Thy mercy and Thy grace'^ top 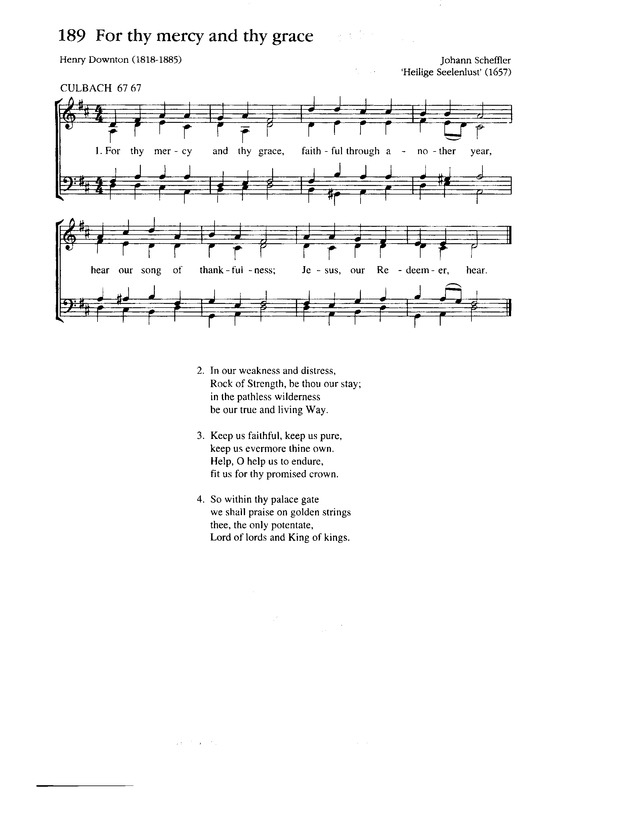 The Song Book of the Salvation Army #937