Forever I Will Sing of Your Great Love, O LORD 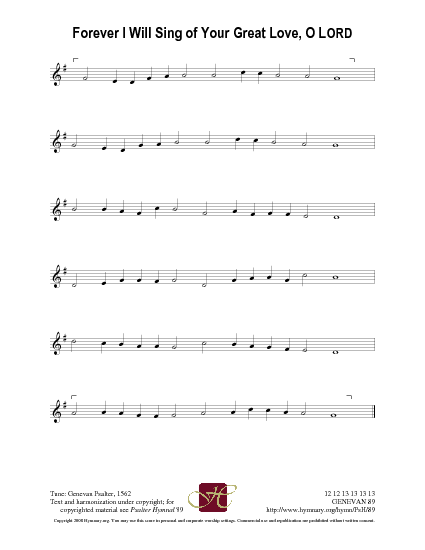 Forever I will sing of your great love, O LORD

A joyful exposition of God's covenant with David as the basis for Israel's security under the Davidic dynasty, and a bitter lament over God's apparent repudiation of that covenant.

This psalm may have been written for one of several instances in which a Davidic king suffered a devastating defeat; most often proposed is Nebuchadnezzar's defeat of Jehoiachin, which spelled the destruction of Judah. Verses 1-37 offer the most extensive exposition and joyful celebration of God's covenant with David found anywhere in the Old Testament (see also 132). However, here the exposition serves only to heighten the shock of God's apparent repudiation of that covenant.

The sudden transition at verse 38 and the unrelieved lament that follows makes this one of the most poignant psalm prayers. Praising God's love expressed in the covenant with David (st. 1), the psalmist declares God's faithfulness and mighty power as sung in the heavens (st. 2) and proclaims the blessedness and security of God's people (st. 3). The LORD promised to raise up David as a mighty warrior and king whose reign would never be overthrown and whose line would never be severed from God's favor (st. 4-5). But alas, laments the psalmist, God has abandoned David's throne and handed Israel over to scornful enemies (st. 6). In anguished prayer he pleads with God: See how your anointed one has been mocked by enemies. How long will it be, O LORD, before you restore "your former great love" to your covenant people (v. 49; st. 7)?

A doxology extolling God's faithfulness to all who praise him closes Book III of the Psalms (st. 8). This versification is the combined work of John Stek (PHH 68), Henrietta Ten Harmsel (PHH 61), and Clarence P. Walhout (PHH 6). Other settings of Psalm 89 are at 169 and 593.

Liturgical Use:
The complete psalm is useful for services focusing on Old Testament redemptive history, especially its messianic theme. Stanzas 1, 2, 3, and 8 make a wonderful doxology.

One of the best-known tunes from the Genevan Psalter, GENEVAN 89 was first published in the 1562 edition. Jacobus J.K. Kloppers (PHH 87) harmonized the tune for the Psalter Hymnal in 1985. The first line is repeated in the second, and all the lines have a similar rhythmic pattern, including the last…

All tunes published with 'Forever I Will Sing of Your Great Love, O LORD'^ top