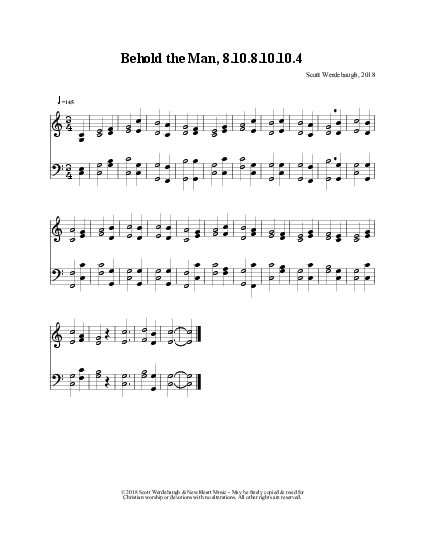 1 Gabbatha—in the judgment hall
Of Roman might—a coward judge—a throng
Of heartless madmen—mid them all,
In patient sufferance of untold wrong,
Serene, resigned, with conscious power strong,
Behold the Man!


2 The Christ! By ancient seers foretold—
A man with whom no mortal can compare—
The Jews’ Messiah, sought of old,
He comes, the sins of multitudes to bear,
And in His people’s woe and weakness share;
Behold the Man!


3 "He came unto His own," but lo!
"His own received Him not"; despised He stands
The victim of their wrath; the woe
Of woes had pierced His soul; life in His hands
Rejected; scorned by heartless, thankless bands:
Behold the Man!


4 They brought Him forth, thorn-crowned, in pain;
Attired in robes of mock regality;
The sign of Heav’nly kingship plain
On His pale brow enstamped—the majesty
Of God blending with human agony:
Behold the Man!


5 They brought Him forth, scourged, bleeding, faint,
Bowed ’neath the burden of a whole world’s sin;
He bore the load without a selfish plaint,
That dying souls may life immortal win,
And through the gates of glory enter in,
Behold the Man!


6 And yet all power was His—a word
From those closed lips and angel hosts would come
Swift to defend their injured Lord,
And hurl His fierce opposers to their doom—
But silent, suffering in sinners’ room,
Behold the Man!


7 Ah! Pilate, did a gleam of truth
Flash on your secret soul in that dark day?
Else why the faltering voice forsooth,
The troubled brow, as you so weakly say,
"I find no fault in Him, take Him away!"
Behold the Man!


8 And ye who in your hearts of stone
Cry "Crucify Him! Crucify Him!" still—
Bleeding for your sins to atone,
Dying to save you from unmeasured ill
A sinless sacrifice on Calv’ry’s hill—
Behold the Man!


9 The day will dawn—it hastens now—
When He before the world shall reappear;
Not ’neath the cross again to bow,
But as a conqueror, a crown to wear!
Then shall ye in dismay and abject fear
Behold the Man!


10 O Christ! all human, all divine!
Pattern of patience and humility!
Inspire my soul with grace like Thine,
That I may bear life’s trials patiently,
And in that day of terror tranquilly
Behold the Man!

Campbell, Emma F. R. (1830-1919). Her first name is sometimes given as "Etta." She was a school teacher in Morristown, New Jersey. She published a few novels and an anthology, The Hymn "Jesus of Nazareth passeth by" and Its History, and Other Verses (New York: M. E. Munson, 1909). Leonard Ellinwood, DNAH Archives… Go to person page >
^ top