Give thanks to God, call on his name, And make his deeds to nations known 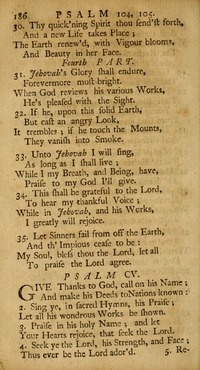 Give thanks to God, call on his name, And make his deeds to nations known

1. Give thanks to God, call on his name;
And make his deeds to nations known:
2. Sing ye, in sacred hymns, his praise;
Let all his wondrous works be shown.
3. Praise in his holy name; and let
Your hearts rejoice, that seek the Lord.
4. Seek ye the Lord, his strength, and face;
Thus ever be the Lord adored.


5. Remember what great works he wrought;
What judgments from his mouth proceed;
6. O ye his servants, Abraham's race,
And ye his chosen Jacob's seed.
7. He's specially the Lord, our God;
His judgments through the earth extend.
8. His covenant firm has ever stood;
Nor shall a thousand ages end.


9. Which covenant he with Abraham made;
And with an aath to Isaac swore:
10. With Jacob fixed it for a law,
And with his heirs forevermore.
11. "Canaan," said he, "to thee I'll give,
The lot your children shall command:"
12. When they, in number, were but few.
Yea, few, and strangers in the land.


13. When they among the nations went,
And still from realm to realm removed;
14. He suffered none to do them wrong;
Yea, monarchs, for their sakes, reproved.
15. Touch not, said he, my servants dear,
Whom I've anointed by mine arm;
And, at your peril, see that ye,
Not, in the least, my prophets harm.


16. At length, a famine through the land,
He sent; which brake the staff of bread.
17. He first a man, ee'n Joseph, sent;
Who, sold a slave, to Ham was led.
18. His feet they hurt with heavy chains;
It pierced his soul to wound his name.
19. Until the time his word took place;
God's word, which tried, and cleared his fame.


20. The king his royal edict gave,
To set him free from all his bands.
21. He made him Lord of all his house;
And ruler over all his lands.
22. Princes at pleasure to control;
Wisely his Senators to guide.
23. Then Israel down to Egypt came;
Did there a sojourner reside.


24. His people greatly he increased,
And blessed with numerous families:
He made them soon in strength exceed
Their proud oppressing enemies:
25. For he had turned their hearts to hate
His people, they in love received;
They sought his servants to destroy,
Them oft by subtle arts deceived.


26. His servant Moses then he sent,
With chosen Aaron, in his name;
27. Confirmed their word, with powerful signs,
And wonders, in the land of Ham.
28. Darkness he called, thick darkness came;
Nature the sovereign orders knew.
29. He turned their waters into blood;
Which the amazed fishes slew.


30. Their land abundant frogs produced;
Which climbed the chambers of their kings.
31. He spake, came swarms of diverse flies;
Dust, through their land, to lice up springs.
32. For rain, he poured down storms of hail;
And flaming fire their land annoyed.
33. Their fruitful vines, and fig trees, smote;
And, through their coasts, their trees destroyed.


34. Locusts, and various reptiles came,
At his command; their swarms abound.
35. Each green herb, through the land,they eat;
And naked left the fruitless Ground.
36. Then, by one fatal midnight stroke,
Which, through each town, and village, flew,
He all their first-born sudden smote;
The fiower of all their strength he slew.


37. With gold and silver spoils, he brought,
Them, forth from Egypt's hated ground;
None feeble, in their numerous tribes;
No, not so much as one was found.
38. Egypt rejoiced, when they withdrew;
For on them seized Israels dread.
39. A covering cloud he spread, by day;
And fire, by night, their marches led.


40. They asked; he brought sweet quails, and they,
With bread from heaven, were satisfied.
41. He clave the rock; the waters gushed,
And rivers in dry land supplied.
42. On his promise, made to Abraham,
Bound by his holiness, he thought.
43. With joy his people, his elect,
With songs of triumph, forth he brought.


44. To them he gave the heathen's soil,
E'en promised Canaan's fertile lands;
The people's labors they enjoyed,
All built, and planted, to their hands.
45. That thus obliged, his statutes they
Might carefully observe always;
And ne'er forget to keep his laws:
Therefore let all Jehovah praise. 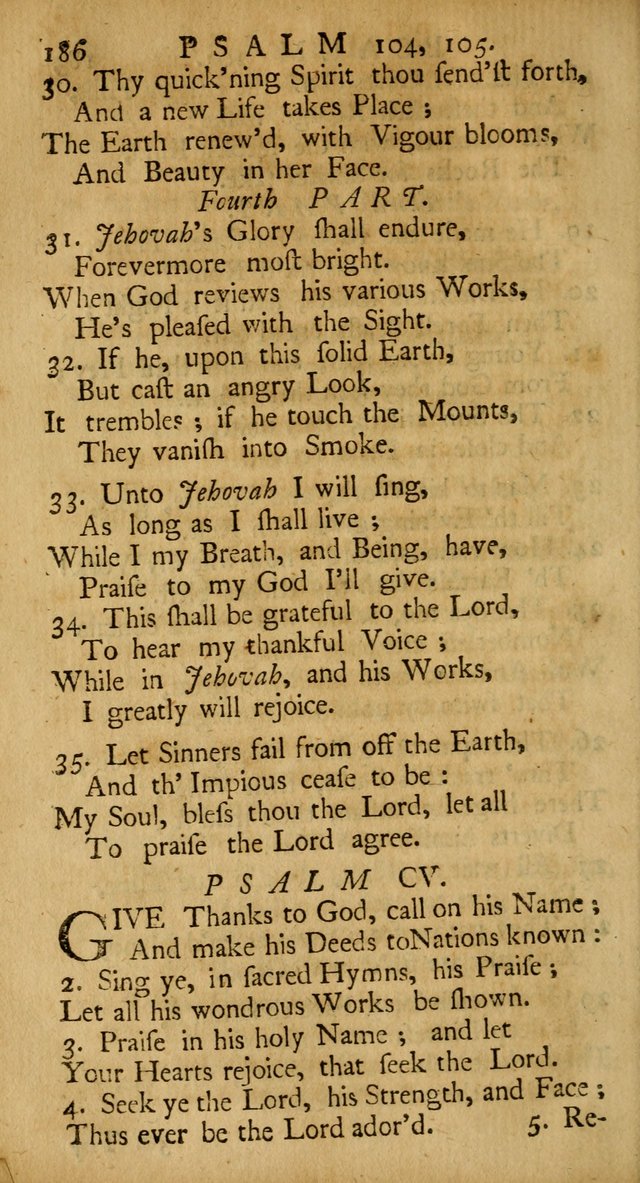 View Page
A New Version of the Psalms of David: Fitted to the Tunes Used in the Churches, With Several Hymns Out of the Old, and New, Testament (1752), p.195
^ top

A New Version of the Psalms of David #186