God Himself Is With Us

God himself is with us, Let us now adore him

1 God himself is with us:
let us now adore him,
and with awe appear before him.
God is in his temple--
all within keep silence,
prostrate lie with deepest rev'rence.
Him alone
God we own,
him, our God and Savior;
praise his name forever.


2 God himself is with us:
hear the harps resounding!
See the crowds the throne surrounding!
"Holy, holy, holy"--
hear the hymn ascending,
angels, saints, their voices blending!
Bow thine ear
to us here:
hear, O Christ, the praises
that thy church now raises.


3 O thou fount of blessing,
purify my spirit;
trusting only in thy merit,
like the holy angels
who behold thy glory,
may I ceaselessly adore thee,
and in all,
great and small,
seek to do most nearly
what thou lovest dearly.

Tersteegen, Gerhard, a pious and useful mystic of the eighteenth century, was born at Mörs, Germany, November 25, 1697. He was carefully educated in his childhood, and then apprenticed (1715) to his older brother, a shopkeeper. He was religiously inclined from his youth, and upon coming of age he secured a humble cottage near Mühlheim, where he led a life of seclusion and self-denial for many years. At about thirty years of age he began to exhort and preach in private and public gatherings. His influence became very great, such was his reputation for piety and his success in talking, preaching, and writing concerning spiritual religion. He wrote one hundred and eleven hymns, most of which appeared in his Spiritual Flower Garden (1731). He… Go to person page >

Foster, Frederick William, second son. of William Foster, was born at Bradford, Aug. 1, 1760, and educated at Fulneck, near Leeds, and at Barby in Prussian Saxony. Entering the Moravian Ministry he held several appointments until 1818, when he was consecrated a Bishop of the Moravian Church. He died at Ockbrook, near Derby, April 12, 1835. He compiled the Moravian Hymn Book of 1801, the Supplement of 1808, and the revised edition of 1826. His translations from the German, and his original hymns appeared in that collection. Two of his original hymns are in the Irish Church Hymnal, 1873; (1) "Lord, Who didst sanctify" 1808 (Holiness desired); and (2) "With thanks before the Lord appear," 1826 (Praise of the Saviour). [George Arthur… Go to person page >
^ top

Gerhardt Tersteegen (b. Mörs, Prussia, Germany, 1697; d. Mühlheim, Germany, 1769) wrote this hymn (“Gott ist gegenwärtig”) in eight stanzas after his conversion experience in 1724. designing it to fit this tune by Neander. The hymn was first published in Tersteegen’s Geistliches Blumengärtlein (1729) with the heading “Remembrance of the glorious and delightful presence pf God.”

Stanzas 1 and 2 summon worshipers to praise and adore God, and stanza 2 (with an allusion to Isa. 6) begins a prayer for sanctification that continues through stanza 3. Though judged inadequate when compared with Tersteegen’s mystical original, the translation (with the current selection of stanzas) is a favorite in many hymnals. While many of Tersteegen’s hymns may be more suitable for private meditation, this one is a fine vehicle for public praise of God.

Tersteegen was a renowned representative of the Christian tradition of mysticism in German Reformed hymnody. He received a gymnasium (high school) education, but after his father’s death, family poverty kept him from university training. He became a merchant and then a weaver, producing silk ribbons. Reared in the Reformed Church, Tersteegen was influenced by a Pietist group but experienced a spiritual depression until 1724, when he dedicated his life to God in a confession written in his own blood.

After this he began to conduct prayer meetings. Attracted to mysticism, Tersteegen became an important spiritual leader to many, and from 1727 until late in his life, he ran a retreat center in Otterbeck, near Mühlheim. He preached in Prussia and the Netherlands and kept up an extensive correspondence. When it was necessary, Tersteegen was supported by his followers, and in turn he shared his goods and simple medicines with the poor, becoming known as the “physician of the poor and the forsaken.” Because his ministry was outside the established church, he often experienced the displeasure of church and civic authorities. His writings include translations into German from Latin and French mystics, sermons and meditiations, and over one hundred hymns published in Geistliche Blumen-Gärtlein (1729 and later editions).

Liturgical Use:
Beginning of worship (useful as a choral introit); stanza 3 fits well after the service of confession and assurance.

All tunes published with 'God Himself Is With Us'^ top 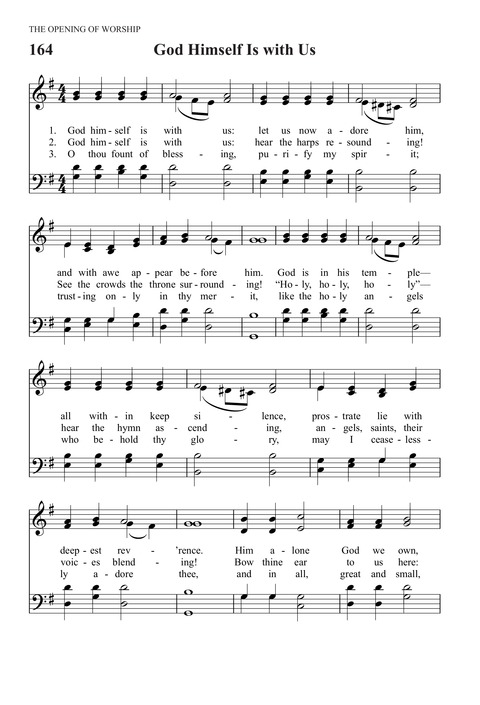 Great Songs of the Church (Revised) #7

Display Title: God Himself is With Us First Line: God Himself is with us: Let us now adore Him Tune Title: ARNSBERG Author: Gerhardt Tersteegen Scripture: Psalm 27:4 Date: 1986
Great Songs of the Church (Revised) #7

Hymns to the Living God #25

Display Title: God Himself Is with Us First Line: God Himself is with us Tune Title: ARNSBERG Author: Gerhard Tersteegen Meter: 6.6.8.6.6.8.6.6.6 Date: 2017 Subject: Revelation and Adoration | Source: Tr. composite
Hymns to the Living God #25