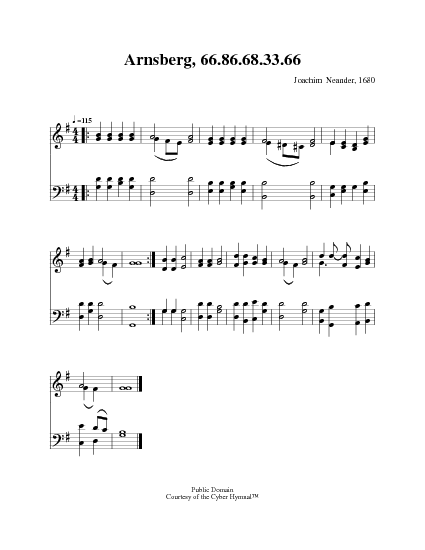 1 God reveals his presence
let us now adore him
and with awe appear before him.
God is in His temple,
all in us keep silence
and before him bow with reverence.
Him alone God we own;
he’s our Lord and Savior.
Praise his name forever.


2 God reveals his presence,
whom th'angelic legions
serve with awe in heav’nly regions.
Holy, Holy, Holy!
Sing the hosts of heaven;
praise to God be ever given.
Bow your ear to us here:
Hear, O Christ, the praises
that your church now raises.


3 O Majestic Being,
may our souls and bodies
at all times be at your service!
Like the holy angels
who bow down before you,
may we ceaselessly adore you,
and through grace,
Jesus' grace,
in our whole demeanor,
offer praise and honor.

Tersteegen, Gerhard, a pious and useful mystic of the eighteenth century, was born at Mörs, Germany, November 25, 1697. He was carefully educated in his childhood, and then apprenticed (1715) to his older brother, a shopkeeper. He was religiously inclined from his youth, and upon coming of age he secured a humble cottage near Mühlheim, where he led a life of seclusion and self-denial for many years. At about thirty years of age he began to exhort and preach in private and public gatherings. His influence became very great, such was his reputation for piety and his success in talking, preaching, and writing concerning spiritual religion. He wrote one hundred and eleven hymns, most of which appeared in his Spiritual Flower Garden (1731). He… Go to person page >

Foster, Frederick William, second son. of William Foster, was born at Bradford, Aug. 1, 1760, and educated at Fulneck, near Leeds, and at Barby in Prussian Saxony. Entering the Moravian Ministry he held several appointments until 1818, when he was consecrated a Bishop of the Moravian Church. He died at Ockbrook, near Derby, April 12, 1835. He compiled the Moravian Hymn Book of 1801, the Supplement of 1808, and the revised edition of 1826. His translations from the German, and his original hymns appeared in that collection. Two of his original hymns are in the Irish Church Hymnal, 1873; (1) "Lord, Who didst sanctify" 1808 (Holiness desired); and (2) "With thanks before the Lord appear," 1826 (Praise of the Saviour). [George Arthur… Go to person page >

Miller, John (sometimes given as Müller, or Muller), was a Moravian minister at various places in England and Ireland from 1768; finally at Cootehill, Co. Cavan, from 1805 to 1810. His original hymns and translations were contributed to the Moravian Hymn Book, 1789. --John Julian, Dictionary of Hymnology, New Supplement (1907)  Go to person page >

Mercer, William, M.A., born at Barnard Castle, Durham, 1811, and educated at Trinity College, Cambridge (B.A., 1835). In 1840 he was appointed Incumbent of St. George's, Sheffield. He died at Leavy Greave, Sheffield, Aug. 21, 1873. His principal work was:—- The Church Psalter and Hymn Book, comprising The Psalter, or Psalms of David, together with the Canticles, Pointed for Chanting; Four Hundred Metrical Hymns and Six Responses to the Commandments; the whole united to appropriate Chants and Tunes, for the use of Congregations and Families, by the Rev. William Mercer, M.A. . .. Assisted by John Goss, Esq…., 1854; enlarged 1856; issued without music, 1857; quarto edition 1860; rearranged edition (Oxford edition) 1864; Appendix 1872.… Go to person page >
^ top

All tunes published with 'God reveals his presence'^ top 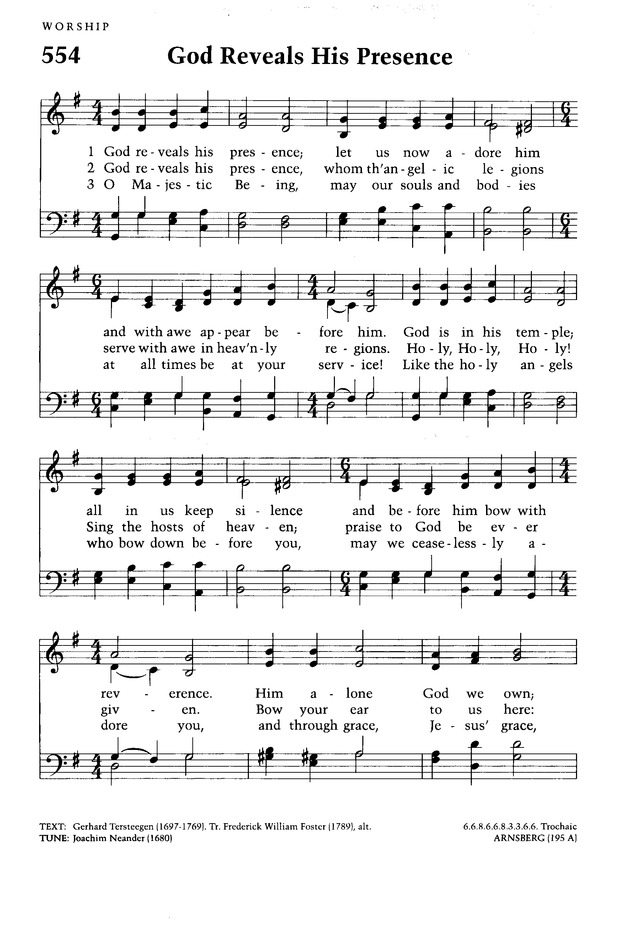