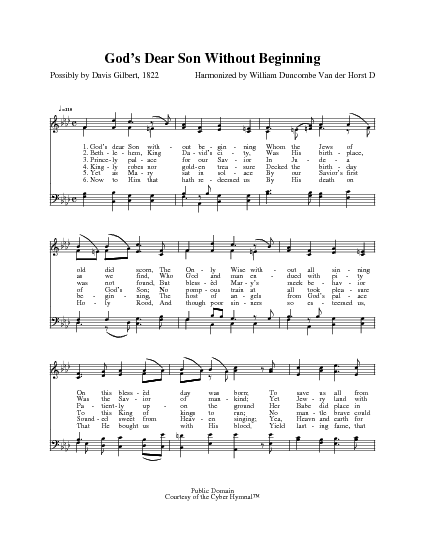 1. God’s dear Son without beginning
Whom the Jews of old did scorn,
The Only Wise without all sinning
On this blessèd day was born;
To save us all from sin and thrall,
When we in Satan’s chains were bound,
And shed His blood to do us good,
With many a purple bleeding wound.


2. Bethlehem, King David’s city,
Was His birthplace, as we find,
Who God and man endued with pity
Was the Savior of mankind;
Yet Jewry land with cruel hand,
Both first and last His power envied;
When He was born, they did Him scorn,
And showed Him malice when He died.


3. Princely palace for our Savior
In Judea was not found,
But blessèd Mary’s meek behavior
Patiently upon the ground
Her babe did place in vile disgrace,
Where oxen in their stalls did feed;
No midwife mild had this sweet child
No woman’s help at mother’s need.


4. Kingly robes nor golden treasure
Decked the birthday of God’s Son;
No pompous train at all took pleasure
To this King of kings to run;
No mantle brave could Jesus have
Upon His cradle for to lie;
Nor music’s charms in nurse’s arms
To sing the babe a lullaby.


5. Yet as Mary sat in solace
By our Savior’s first beginning,
The host of angels from God’s palace
Sounded sweet from Heaven singing;
Yea, Heav’n and earth for Jesus’ birth,
With sweet melodious tunes abound,
And everything for Jewry’s king,
Upon the earth gave cheerful sound.


6. Now to Him that hath redeemed us
By His death on Holy Rood,
And though poor sinners so esteemed us,
That He bought us with His blood,
Yield lasting fame, that still the name
Of Jesus may be honored here;
And let us say that Christmas Day
Is still the best day of the year.

Chope, Richard Robert, M.A., born Sept. 21, 1830, educated at Exeter College, Oxford, B.A., 1855, and took Holy Orders as Curate of Stapleton, 1856. During his residence at Stapleton the necessities of the Choir led him to plan his Congregational Hymn and Tune Book, published in 1857. In 1858 he took the Curacy of Sherborne, Dorset; in the following year that of Upton Scudamore, where he undertook the training of the Chorus of the Warminster district for the first Choral Festival in Salisbury Cathedral; and in 1861 that of Brompton. The enlarged edition of The Congregational Hymn Book was published 1862, and The Canticles, Psalter, &c, of the Prayer Book, Noted and Pointed, during the same year. In 1865 he was preferred to the parish of St.… Go to person page >
^ top

All tunes published with 'God's Dear Son Without Beginning'^ top 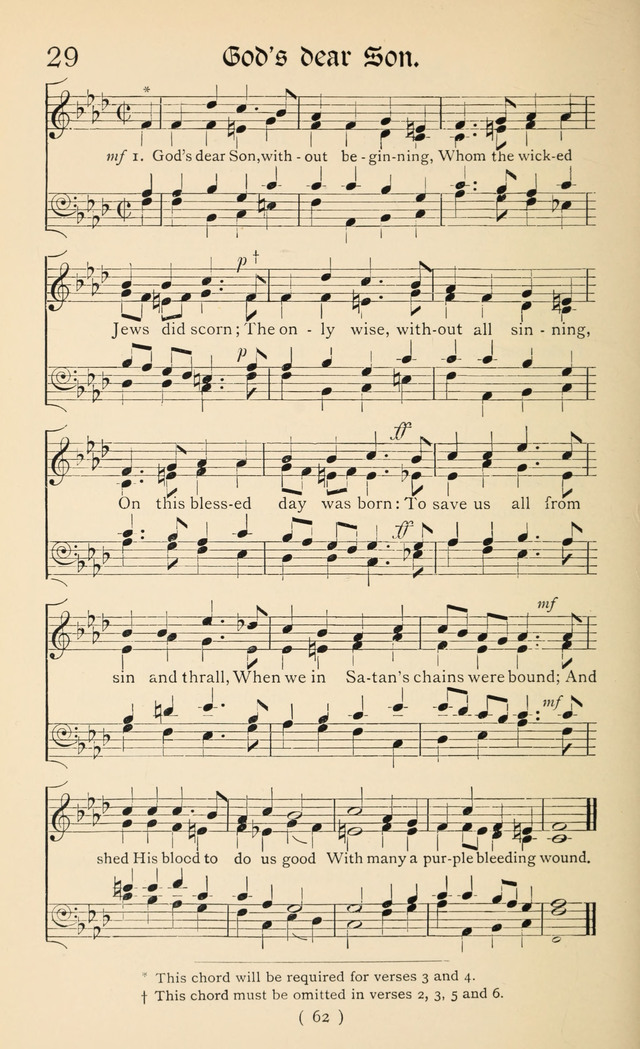