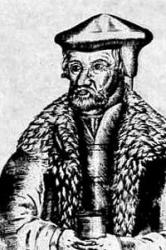 Speratus, Paulus, D.D., was born in Swabia, Dec. 13, 1484. In a poem, written circa 1516, on Dr. J. Eck, he calls himself Elephangius, i.e. of Ellwangen; and in his correspondence, preserved at Königsberg, he often styles himself "a Rutilis" or "von Rötlen." These facts would seem to indicate that he was born at the castle of Röthlen, near Ellwangen. This property belonged to the Probst of the ecclesiastical corporation at Ellwangen, and Speratus's father was probably their bailiff or agent. The family name seems to have been Hoffer or Offer, and to have been in later years, following a practice common in the 16th cent., Latinized by himself into Speratus. He is probably the "Paul Offer de Ellwangen," who matri¬culated at the Universit… Go to person page >