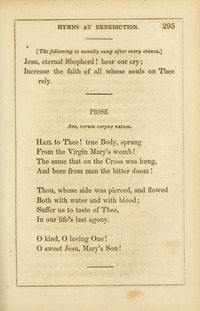 Ave verum corpus natum. Anon. [Holy Communion.] The text will be found in Daniel, ii. p. 327. Also as No. 213 in Mone’s Collection; with the heading, In elevatione Corporis Christi, and the statement that a Reichenau manuscript of the 14th century, says "Pope Innocent composed the following salutation" ("Salutationem sequentem composuit Innocentius Papa"), and "this prayer has three years of indulgences granted by Pope Leo" ("haec oratio habet tres annos indulgentiaruni a dom. Papa Leone"). Levis, Anecdota sacra, Turin, 1789, p. 107, gives the text with the variation Esto nobis praestantior virtus in examine, instead of Esto nobis praegustatum mortis in examine. It is in J. M. Horst's Paradisus Animae (ed. Cologne, 1644, p. 321), Sect. V., "De Sacram. Eucharistiae," as a private devotion at the elevation of the Host in the Mass ("sub elevatione "). It is also in Kehrein, No. 157. See Ave Christi Corpus verum, for a cognate hymn at the elevation of the Chalice. [Rev.W. A. Shoults, B.D.]
Translations in common use:—
1. Hail to Thee! true Body sprung. By E. Caswall. First published in his Lyra Catholica, 1849, p. 249, in 10 lines; and again, slightly altered, in his Hymns & Poems, 1873, p. 162. In the Roman Catholic hymnals the original translation is generally used. In the People's Hymnal1867, No. 177, we have a cento from this translation of Caswall, that by J. R. Beste, and others. 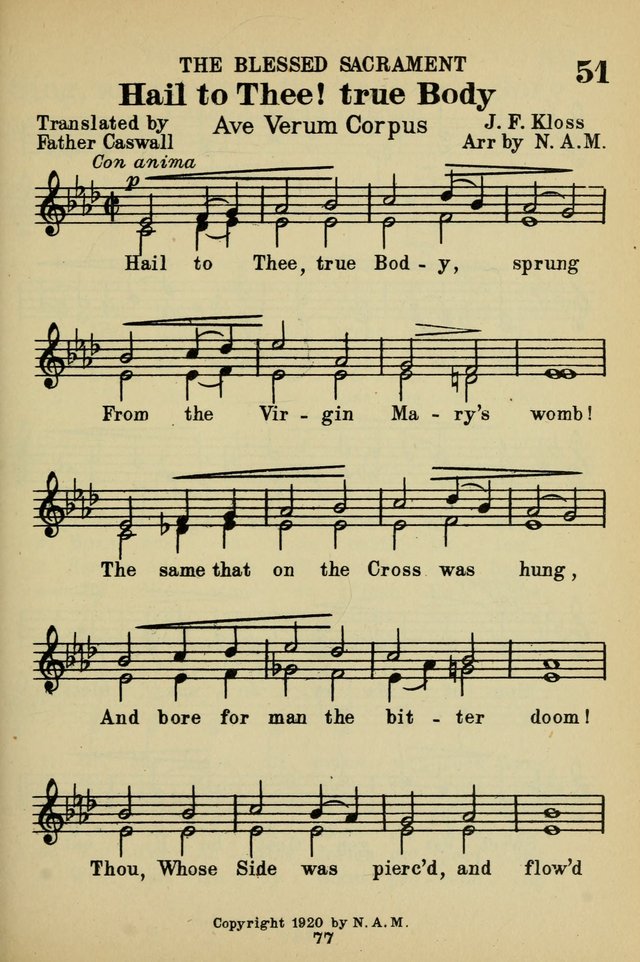