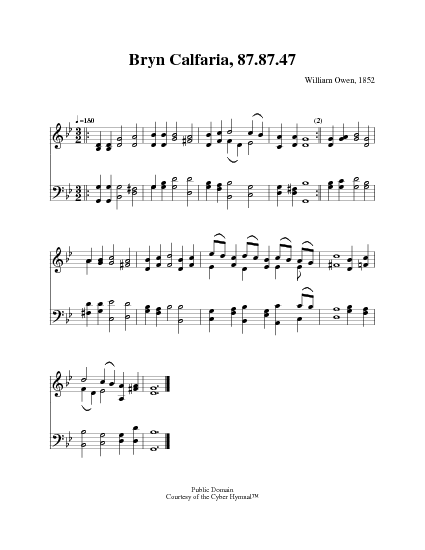 Hark! the voice of love and mercy

Evans, Jonathan, born at Coventry in 1748 or 1749. He was the son of a working man, and as a youth was employed in a ribbon manufactory. About 1778 he joined the congregation at Coventry, over which the Rev. G. Burder was pastor. He began preaching at Foleshill, near Coventry, in 1782, and in 1795 he began his stated ministry there, retaining the same to his death on Aug. 31, 1809. Two biographical notices of him appeared in the Evangelical Magazine (Oct. 1809, and March 1847), and also several of his hymns. Two of his hymns appeared in Burder's Collection, 1784, and another in the 2nd edition the same year. His best known hymns are, "Come, Thou soul-transforming Spirit,” and "Hark! the voice of love and mercy;" q.v. He published no poeti… Go to person page >
^ top

Hark, the voice of love and mercy. [Good Friday—Holy Communion.] The authorship of this popular hymn has long been a matter of dispute. On the one band it has been claimed for the Rev. Jonathan Evans, and on the other for the Rev. Benjamin Francis. The evidence on behalf of each is as follows:-—
i. For Jonathan Evans.
1. In 1784 the hymn appeared in the Rev. G. Burder's Collection of Hymns, &c, No. 126, in 5 stanzas of 6 lines, but in the index of authors it had no signature.
2. Forty-three years later, viz. in the 25th edition of his Collection, 1827, Burder tilled the blank in with the name of J. Evans.
3. Dr. J. Styles, who succeeded J. Evans as Pastor of the Foleshill congregation, published from Evans's manuscript several hymns in the Evangelical Magazine; and in the same Magazine, in March, 1847, he claimed this hymn for his predecessor.
ii. For Benjamin Francis.
1. Francis contributed to Rippon's Baptist Selection, 1787, five hymns, each of which was signed "B. Francis"; and one hymn altered from Gregg. In the same Selection there were two hymns which were signed "F-----." The first of these was, "Hark, the voice of love and mercy"; and the second, "Lord, Thou hast made me know Thy ways."
2. During Dr. Rippon's lifetime there were no changes made in this signature. At his death in 1836, the copyright of the Selection expired, and some interested persons published "A New Edition."
3. In this "New Edition" the "F-----" was expanded into "Francis," in the case of "Hark, the voice of love and mercy"; but the signature of "Lord, hast Thou made me know Thy ways," remained as before.
4. On these grounds it is claimed for B. Francis.
These claims are not so satisfactory as could be desired, either for Evans or for Francis; and this is still more evident when we find that the second hymn with the signature " F----" in Rippon ("Lord, hast Thou made me know Thy ways") is a cento from Dr. John Fawcett's hymn in 6 stanzas published in his Hymns, &c, 1782, No. 123, and composed of stanzas i., v. and vi. The " F-----" in Rippon, in this instance, is John Fawcett (q.v.) of Yorkshire. "Hark, the voice of love and mercy," however, is not found in Fawcett's Hymns, 1782, and cannot be claimed for him. The evidence is in favour of Jonathan Evans; and the fact that Burder gave J. Evans in full in his Collection of 1827 gives it great weight.
In America this hymn is as extensively used as in Great Britain, and in common with the hymn-books of Great Britain it is attributed in the American collections, now to "B. Francis” and again to "J. Evans." The hymn in its original form was intended for general use if stanza iv. were omitted, and for Holy Communion, when it was used. It reads:—

”Happy souls, approach the table,
Taste the soul-reviving food!
Nothing half so sweet and pleasant
As the Saviour's flesh and blood.
‘It is finished'!
Christ hath borne the heavy load."

The original text in Burder's Collection was re¬peated in Rippon's Selection with the single change in stanza ii., line 2, of "Do these precious words afford," to "Do these charming words afford." Rippon's full text is in the Lyra Britannica, 1867, p. 653, accompanied by two notes on its authenticity. The Editor, however, was unaware that the hymn appeared in Burder's Collection three years before it was given in Rippon's Selection, 1787, and falls into the error of attributing its first appearance to Rippon's Selection. The text, with the omission of stanza iv., is translated into Latin in R. Bingham's Hymnologia Christiana Latina, 1871, p. 221, as "Audin' ? clara vox amoris." 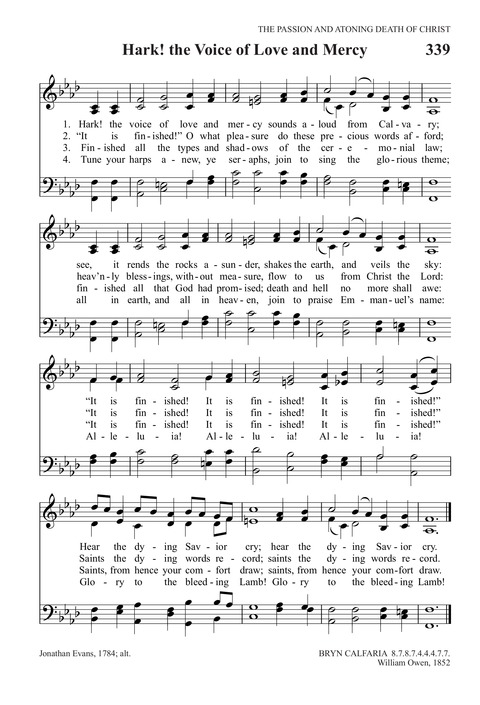