Have You Heard the Wondrous Story? 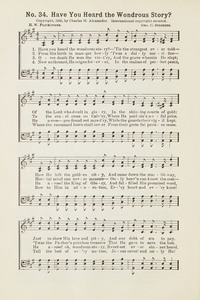 Have you heard the wondrous story? 'Tis the strangest ever told

1 Have you heard the wondrous story?—
‘Tis the strangest ever told—
Of the Lord who dwelt in glory,
In the shining courts of gold;
How He left the golden city,
And came down the starlit-way,
Just to show His love and pity,
And our debt of sin to pay.


2 From His birth in manger lowly
‘Twas a daily sacrifice—
To the cruel cross on Calv’ry,
Where He paid sin’s awful price.
Mortal mind can never measure—
Only heav’n can know the cost—
‘Twas the Father’s priceless treasure
That He gave to save the lost. [Refrain]


3 Over death He won the vict’ry,
And the grave wherein He slept;
He arose—profoundest myst’ry,
While the guards their vigil kept.
He arose! the King of Glory,
And fulfilled His promised word,
He arose! oh, wondrous story,
Sweetest ever sinner heard. [Refrain]


4 Now enthroned, He reigns forever,
In the realms of perfect peace,
Where the ransomed hosts shall never
From their grateful praises cease.
Bow to Him in adoration,
Ev’ry heart and ev’ry knee!
Tell the lost of ev’ry nation,
Jesus saves! and only He! [Refrain]

Henry W. Flickinger, the noted penman and author, seventh in the family of Peter Flickinger, was born Aug. 30, 1845. He was a native of Ickesburg, Saville township, Perry County, Pa. Here he was reared and in his boyhood enlisted as a soldier in the Civil war. After attending the public and some select schools of his native county, on July 18, 1864, at Camp Curtis, Harrisburg, he was enrolled a member of Co. D., 1st Bat., to serve 100 days. He was appointed fifer of the company and clerk for the captain, Samuel R. Faber. Among his associates in this company were his brother, Martin Flickinger; Corporal A. J. Kochenderfer, and a mess-mate and sergeant, George Flickinger. He was discharged by the general order at the close of the war, July 20… Go to person page >
^ top

[Have you heard the wondrous story] (Stebbins)

All tunes published with 'Have You Heard the Wondrous Story?'^ top 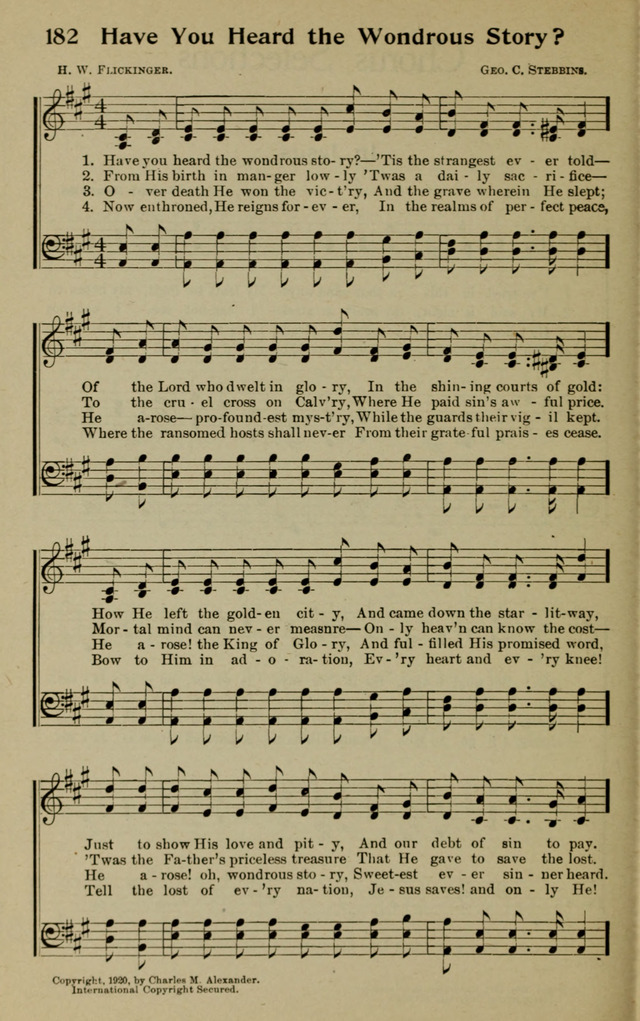