Fearless in the Fire of Tribulation 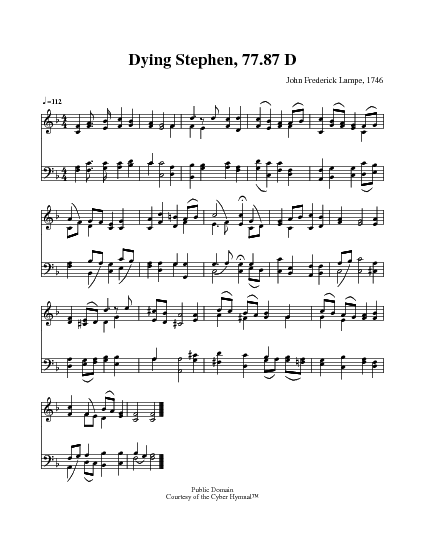 Head of Thy Church triumphant

1 Head of Thy Church triumphant,
We joyfully adore Thee;
Till Thou appear, Thy members here
Shall sing like those in glory:
We lift our hearts and voices
With blest anticipation,
And cry aloud, and give to God
The praise of our salvation.


2 While in affliction's furnace,
And passing through the fire,
Thy love we praise Which knows our days,
And ever brings us nigher:
We lift our hands exulting
In Thine almighty favor;
The love Divine Which made us Thine,
Shall keep us Thine for ever.


3 Thou dost conduct Thy people
Through torrents of temptation;
Nor will we fear, While Thou art near,
The fire of tribulation:
The world, with sin and Satan,
In vain our march opposes;
Through Thee we shall Break through them all,
And sing the song of Moses.


4 By faith we see the glory
To which Thou shalt restore us,
The cross despise For that high prize
Which Thou hast set before us;
And if Thou count us worthy,
We each, as dying Stephen,
Shall see Thee stand At God's right hand
To take us up to heaven.

Source: The Hymnal: published by the Authority of the General Assembly of the Presbyterian Church in the U.S.A. #301

Head of Thy [the] Church triumphant. C. Wesley. [In time of Trouble.] First published in his Hymns for Times of Trouble for the Year 1745, No. xv., in 4 stanzas of 10 lines (Poetical Works, 1868-72, vol. iv. p. 79). The special Trouble was the threatened attack on England by Charles Edward Stuart, the young Pretender, in consequence of which, together with foreign wars, a National Fast was proclaimed. This Wesley tract, composed on that occasion, contained 15 hymns. This hymn was included in Whitefield's Collection, 1753; Madan's Psalms & Hymns, 1760; Toplady's Psalms & Hymns, 1776; the early editions of the Lady Huntingdon Collection, and others of the older hymn-books. Gradually it became very popular, and its use extended to most English-speaking countries. Notwithstanding this success it was excluded from the Wesleyan Hymn Book until the revised edition, 1875. It has been and still is often attributed to De Courcy. The mistake began with Bickersteth in his Christian Psalmody, 1833. He copied from De Courcy's Collection, in which authors' names were not given, and was thus led into the error. In the last stanza of the hymn there is a reference to the death of Stephen, which has led in a few instances to the adoption of the hymn for St. Stephen's day.
In Archdeacon Robinson's Last Days of Bishop Heber, pp. 179-180, quoted in Heber's Life, 1830, vol. ii. pp. 435-6, the Archdeacon says, under date "Trichinopoly, April 2, 1826 " (the day before the Bishop's sudden death at that place):—

"On returning from church in the morning, I was so ill as to be obliged to go to bed, and with his [the Bishop's] usual affectionate consideration, he came and sat the greater part of the afternoon with me. . . . Our conversation this afternoon turned chiefly on the blessedness of Heaven, and the best means of preparing for its enjoyment. He repeated several lines of an old hymn which he said, in spite of one or two expressions which familiar and injudicious use had tended to vulgarize, he admired as one of the most beautiful in our language, for rich and elevated tone of devotional feeling.

Head of the Church triumphant!
We joyfully adore Thee,'" &c.

This is great praise. The hymn, however, lacks the refinement which is so marked a feature in the finest of C. Wesley's compositions. Its use is extensive.

All tunes published with 'Fearless in the Fire of Tribulation'^ top 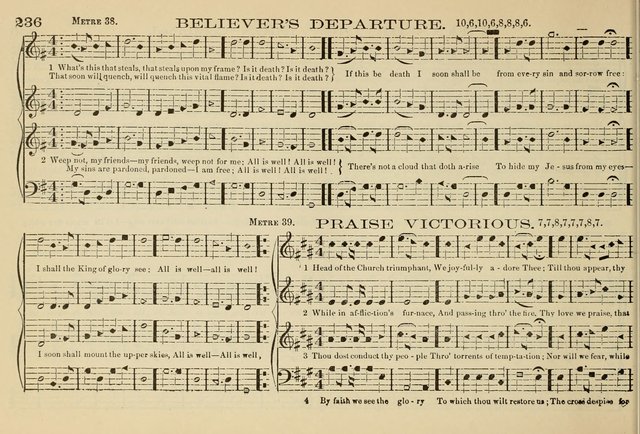