High on the throne of the Ancient of Days 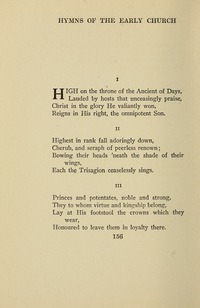 High on the throne of the Ancient of Days

High on the throne of the Ancient of Days,
Lauded by hosts that unceasingly praise,
Christ in the glory He valiantly won,
Reigns in His right, the omnipotent Son.

Highest in rank fall adoringly down,
Cherub, and seraph of peerless renown;
Bowing their heads 'neath the shade of their wings,
Each the Trisagion ceaselessly sings.

Princes and potentates, noble and strong,
They to whom virtue and kin-ship belong,
Lay at His footstool the crowns which they wear,
Honoured to leave them in loyalty there.

157
Who can approach where such majesty bright,
Fills with its radiance the dwelling of light?
Who, where immortals abide evermore,
Dare in the glory transcendent adore?

Lo, from the regions of sorrow they come,
Singing, whose lips in the darkness were dumb;
Thousands, ten thousands, with offerings of love,
Rise to the bliss that receives them above.

Thou hast redeemed them, O Christ, they are Thine,
Pure as the hosts in Thy presence they shine;
They with the angels adoringly praise,
Blending their song with immortals' always. 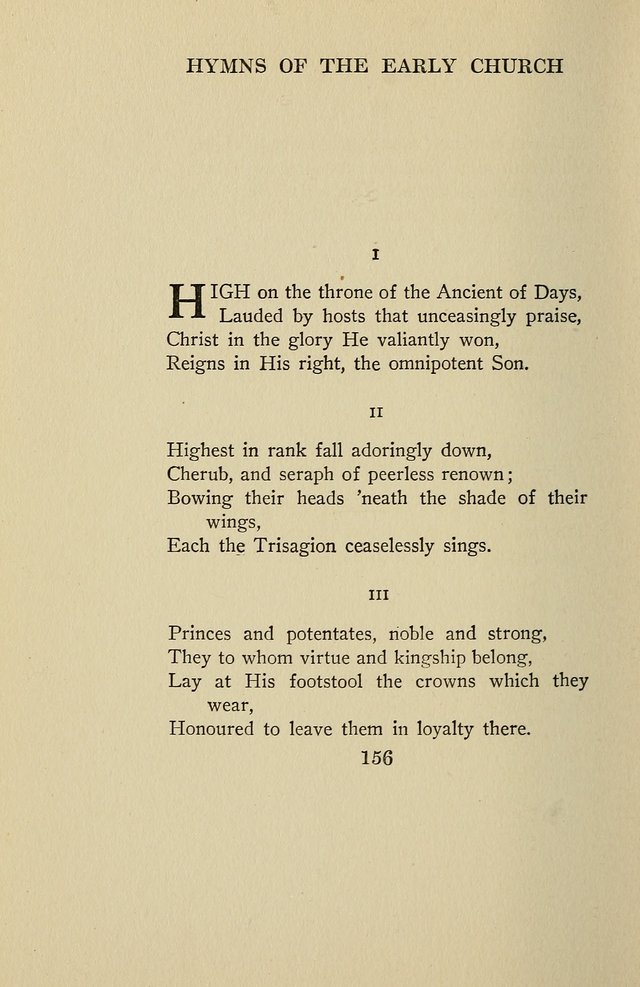 View Page
Hymns of the Early Church: translated from Greek and Latin sources; together with translations from a later period; centos and suggestions from the Greek; and several original pieces (1913), p.156
^ top

Hymns of the Early Church #156