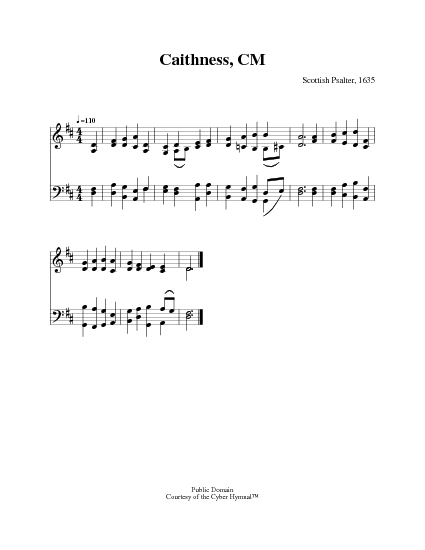 1 Ho! ye that thirst, approach the spring
where living waters flow;
free to that sacred fountain all
without a price may go.
How long to streams of false delight
will ye in crowds repair?
How long your strength and substance waste
on trifles light as air?


2 My stores afford those rich supplies
that health and pleasure give;
incline your ear, and come to Me;
the soul that hears shall live.
With you a cov’nant I will make
that ever shall endure;
the hope which gladdened David’s heart
My mercy hath made sure.


3 Behold He comes! your Leader comes,
with might and honor crowned;
a Witness who shall spread My Name
to earth’s remotest bound.
See! nations hasten to His call
from ev’ry distant shore;
isles, yet unknown, shall bow to Him,
and Israel’s God adore.


4 Seek ye the LORD while yet His ear
is open to your call;
while offered mercy still is near,
before His footstool fall.
Let sinners quit their evil ways,
their evil thoughts forego,
and God, when they to Him return,
returning grace will show.


5 With joy and peace shall then be led
the glad converted lands;
the lofty mountains then shall sing,
the forests clap their hands.
Where briers grew ‘midst barren wilds,
shall firs and myrtles spring;
and nature, through its utmost bounds,
eternal praises sing.

Source: Hymns to the Living God #79

Ho, ye that thirst, approach the spring. [Lent.] First appeared as No. 27 in the Draft Scottish Translations and Paraphrases, 1745, as a version of Isaiah lv., in 14 stanzas of 4 lines. In the revised edition issued in 1751, stanza ii. was rewritten, and stanzas iv., vi., xii., slightly altered. Considerable alterations were made when it was included as No. 26 in the Draft of 1781; and in the public worship edition issued in that year by the Church of Scotland, and still in use, it was further altered, and stanzas iii.-vi., viii. rewritten. The markings by the eldest daughter of W. Cameron (q.v.) ascribe the alterations of 1781 to Cameron, and the original of 1745 to William Robertson; but this ascription to Robertson is not made by any other of the authorities, and is at least doubtful. The revised text of 1781 has passed into a few modern hymnals; stanzas i.-vi. being included in Burgess & Money's Psalms & Hymns, 1857, English Presbyterian Psalms & Hymns, 1867, and the Free Church Hymn Book, 1882. The following abridged or altered forms have also been in use:—
1. Ye thirsty souls, approach the spring (stanza i. altered), in Belknap's Sacred Poetry, Boston, U.S., 3rd edition, 1801, No. 298.
2. Behold, He comes! your Leader comes (stanza v.), Twickenham Chapel Collection, 1845, as for the 3rd S. after Epiphany.
3. Seek ye the Lord, while yet His ear (stanza vii.), English Presbyterian Psalms & Hymns, 1867; Free Church Hymn Book, 1682.
A version founded on the 1781, in four parts, viz.:—i. “Ho, every one that thirsteth, come." ii. "Thus saith the Lord, 'Incline your ear.'" iii. "Seek ye the Lord, while yet His ear.” iv. "As rain and snow, on earth bestow,” is found as No. 55 in Miss Leeson's Paraphrases and Hymns for Congregational Singing, 1853, [Rev. James Mearns, M.A.]

All tunes published with 'Ho! ye that thirst, approach the spring'^ top 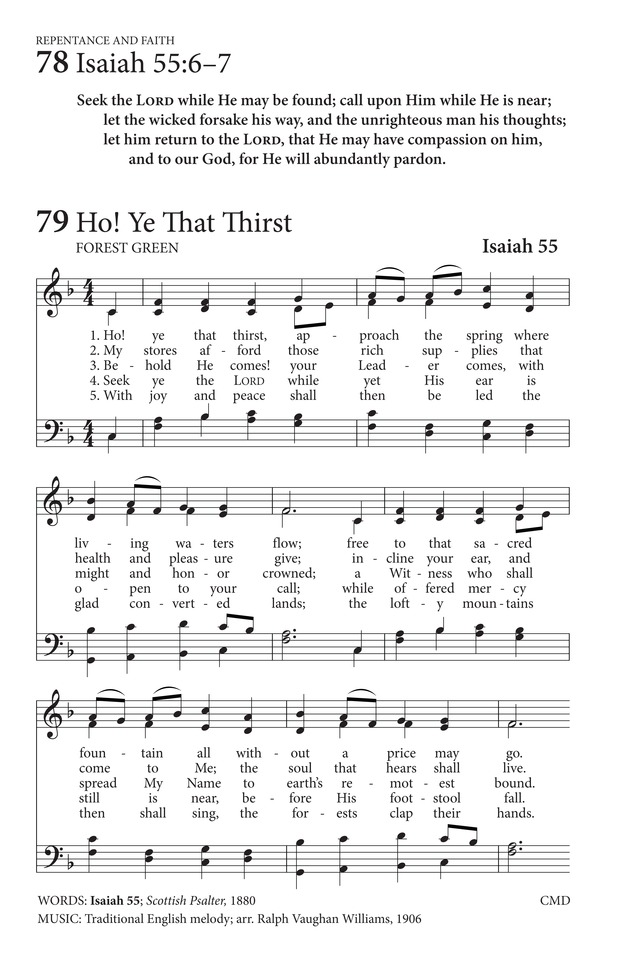 Hymns to the Living God #79