How blest thy creature is, O God 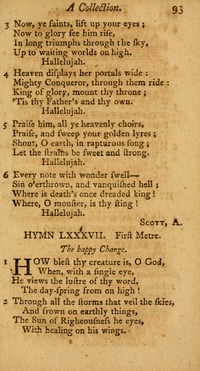 How blest thy creature is, O God

How blest Thy creature is, O God. W. Cowper. [The Blessedness of Peace with God.] Southey in his Memoirs and Correspondence of William Cowper, 1854, vol. i. pp. 99-104, gives an account of Cowper's insanity, his residence at St. Albans under the care of Dr. Cotton, and his partial recovery. At the beginning of his attack Cowper wrote a most painful poem, the nature and burden of which will be gathered from the following (the third) stanza, which reads:—

"Man disavows, and Deity disowns me,
Hell might afford my miseries a shelter;
Therefore, hell keeps her ever-hungry mouths all
Bolted against me."

In contrast to this despair Southey states that

"During this [the latter part of his stay with Dr. Cotton] part of his abode at St. Albans, he again poured out his feelings in Terse, and the contrast is indeed striking between what he called this specimen of his first Christian thoughts, and that song of despair [noted above] which cannot be perused without shuddering. He cast his thoughts in the form of a hymn, which he entitled ' The Happy Change,' and took for his text part of a verse in the Revelations, 'Behold, I make all things new.'"

The hymn composed under these circumstances, in July, 1765, is full of peace and hope, as evidenced in stanza iv.:—

"The soul, a dreary province once
Of Satan's dark domain,
Feels a new empire formed within,
And owns a heavenly reign."

The publication of the hymn in 6 stanzas of 4 lines with Cowper's original title, "The Happy Change," was in the Olney Hymns, 1779, Book iii., No. 44. In full or in part it is given in several hymn-books, especially in America. Sometimes it begins:—"How blest is man, O God," as in the American Unitarian Hymns for the Church of Christ, Boston, 1853. 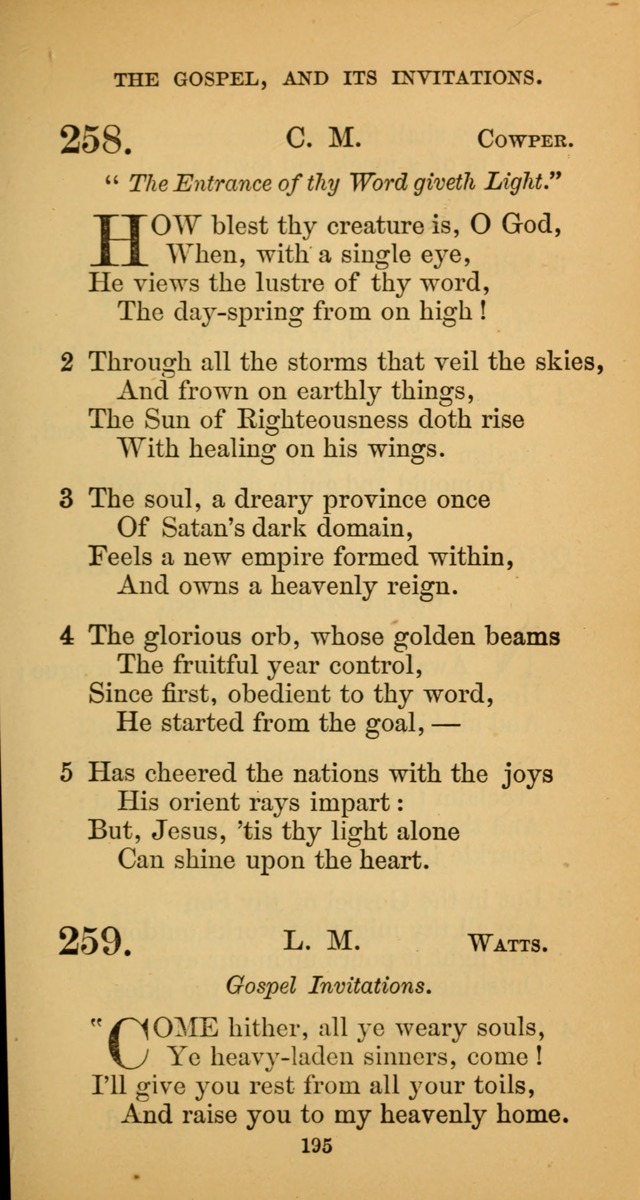 A Choice Selection of Psalms, Hymns and Spiritual Songs for the use of Christians #711

A Collection of Psalms and Hymns for the Sanctuary #227

A Collection of Psalms and Hymns for the use of Universalist Societies and Families (13th ed.) #606

A Collection of Psalms and Hymns for the Use of Universalist Societies and Families 16ed. #606

A Collection of Psalms and Hymns #132

A Collection of Psalms and Hymns #226

A Selection of Hymns, from the Best Authors, Designed as a Supplement to Dr. Watts' Psalms and Hymns #d244

A Selection of Sacred Poetry #226

A Selection of Sacred Poetry #226

Congregational Hymn and Tune Book; containing the Psalms and Hymns of the General Association of Connecticut, adapted to Suitable Tunes #426

Hymns for the Church of Christ (3rd thousand) #278

Hymns, Selected from Various Authors, for the Use of Young Persons 3rd Am. from 9th London ed. #d97

Hymns, Selected from Various Authors, for the Use of Young Persons #d88

Plymouth Collection of Hymns and Tunes; for the use of Christian Congregations #50

Psalms and Hymns, for Christian Use and Worship #H385

Selection from Tate and Brady's Version of the Psalms; with Hymns by Various Authors, for the Church in Brattle-Square #d125

The Baptist Hymn and Tune Book #50

The Mozart Collection of Sacred Music #96

The Philadelphia Hymn Book; or, a selection of sacred poetry, consisting of psalms and hymns from Watts...and others, adapted to public and private devotion #226

The Springfield Collection of Hymns for Sacred Worship #367