How few receive with cordial faith 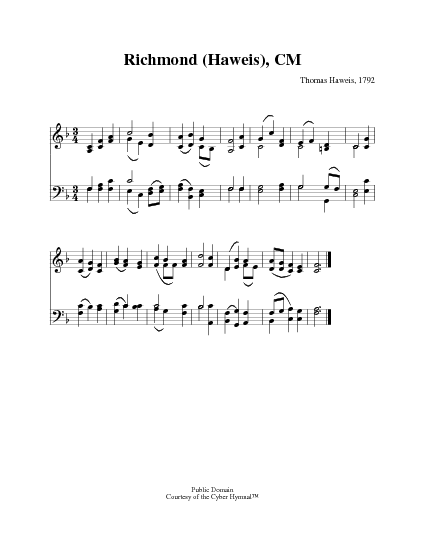 How few receive with cordial faith

1 How few receive with cordial faith
the tidings which we bring?
How few have seen the arm reveal'd
of heav’n’s eternal King?
2 The Saviour comes! no outward pomp
bespeaks his presence nigh;
no earthly beauty shines in him
to draw the carnal eye.


3 Fair as a beauteous tender flow’r
amidst the desert grows,
so slighted by a rebel race
the heav’nly Saviour rose.
4 Rejected and despis'd of men,
behold a man of woe!
Grief was his close companion still
through all his life below.


5 Yet all the griefs he felt were ours,
ours were the woes he bore:
pangs, not his own, his spotless soul
with bitter anguish tore.
6 We held him as condemn'd by Heav’n,
an outcast from his God,
while for our sins he groan'd, he bled,
beneath his Father’s rod.


7 His sacred blood hath wash'd our souls
from sin’s polluted stain;
his stripes es have heal'd us, and his death
reviv'd our souls again.
8 We all, like sheep, had gone astray
in ruin’s fatal road:
on him were our transgressions laid;
he bore the mighty load.


9 Wrong'd and oppress'd how meekly he
in patient silence stood!
Mute, as the peaceful harmless lamb,
when brought to shed its blood.
10 Who can his generation tell?
from prison see him led!
With impious show of law condemn'd,
and number'd with the dead.


11 ’Midst sinners low in dust he lay;
the rich a grave supply'd:
unspotted was his blameless life;
unstain'd by sin he dy'd.

Robertson, William, was the son of David Robertson of Brunton in Fife. After finishing his University course he was licensed to preach in 1711. He is said to have been assistant to the minister of the Presbyterian Church of London Wall, London, before his settlement, in 1714, as parish minister of Borthwick, Midlothian. In 1733 he was appointed minister of Lady Yesters, Edinburgh, and in 1736 of Old Greyfriars, and died at Edinburgh, Nov. 16, 1745. He was in 1742 appointed a member of the Committee of the General Assembly of the Church of Scotland, which compiled the Translations and Paraphrases of 1745, and is said to have contributed 3 paraphrases which, in the 1781 collection, are numbered 25, "How few receive with cordial faith" (p. 536… Go to person page >
^ top

How few receive with cordial faith. W. Robertson. [Passiontide.] First appeared as No. 6 in the Draft Scottish Translations & Paraphrases, 1745, as a version of Is. liii. in 16 stanzas of 4 lines. In the revised edition, 1751, stanzas viii., x., xii. were slightly altered. In the Draft of 1781, No. 25, it was considerably altered; and with further alterations this was repeated in the public worship edition of that year which is still in common use in the Church of Scotland. In the markings by the eldest daughter of W. Cameron (q.v.), the original is ascribed to W. Robertson, and the alterations in 1781 to John Logan. The revised text of 1781 is included in full in the English Presbyterian Psalms & Hymns, 1867, as two hymns, No. 170 beginning as, above, and 171 as "We all like sheep have gone astray." In addition the following centos are in common use:—
1. The Saviour comes [came], no outward pomp. In Murray’s Hymnal, 1852; the Baptist Psalms & Hymns, 1858; Kennedy, 1863, and others in Great Britain and America.
2. Rejected and despised of men. In the Andover Sabbath Hymn Book, 1858, &c.
3. Fair as a beauteous, tender flower. In Hymns from the Parish Choir, 1854.
In addition, Miss Leeson published an altered form of the hymn in 9 stanzas in her Paraphrases & Hymns for Congregational Singing, 1853, as pt. i.," Who hath believed the Witness-Word?"; and pt. ii., "We counted as condemned of heaven." Compare also Watts's Hymns, 1709, Book i., Nos. 141-2. [Rev. James Mearns, M.A.]

All tunes published with 'How few receive with cordial faith'^ top 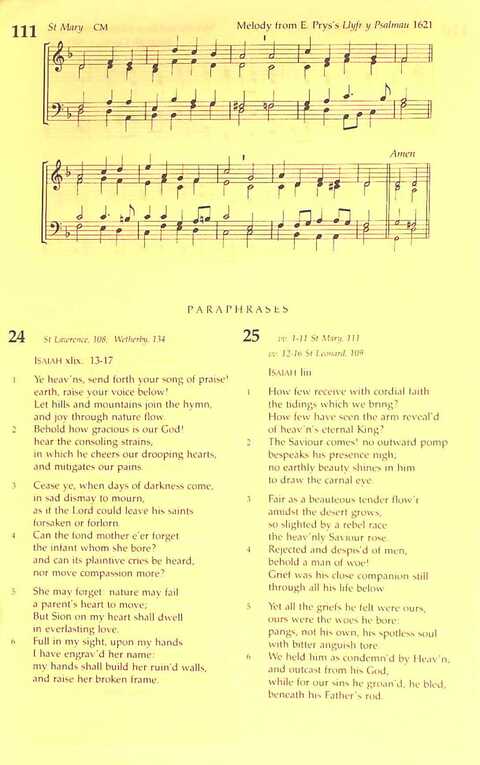