I Am a Child of God 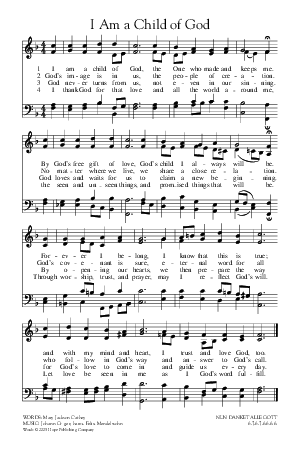 I am a child of God, the One who made and keeps me

Mary Jackson Cathey (b. 1926) was born in Florence, SC, and educated at Winthrop University, Rock Hill, SC. She received an advanced degree from Union Seminary - Presbyterian School of Christian Education in Richmond. As a Christian Educator she finds hymn text writing a profound way to express her faith. Her hymns have won contests sponsored by The Hymn Society in the United States and Canada, and a number of her poems have been published by John Knox Press, The Pilgrim Press, and Hope Publishing. She has four hymns to her credit in The Presbyterian Hymnal (1990) and others published by Selah Press, Choristers Guild, and Zimbel Press. She is an elder at the National Presbyterian Church in Washington, DC. --www.hopepublishing.com… Go to person page >
^ top

All tunes published with 'I Am a Child of God'^ top