I heard a sound of voices 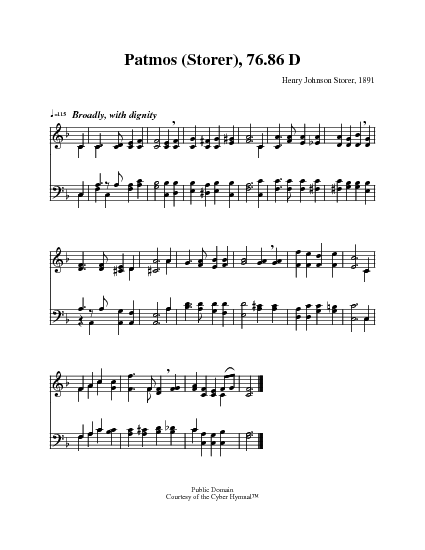 I heard a sound of voices

1 I heard a sound of voices
Around the great white throne,
With harpers harping on their harps
To him that sat thereon:
"Salvation, glory, honor!"
I heard the song arise,
As thro' the courts of heav'n it rolled
In wondrous harmonies.


2 From every clime and kindred,
And nations from afar,
As serried ranks returning home
In triumph from a war,
I heard the saints upraising,
The myriad hosts among,
In praise of Him Who died and lives,
Their one glad triumph-song.


3 I saw the holy city,
The New Jerusalem,
Come down from heaven, a bride adorned
With jeweled diadem;
The flood of crystal waters
Flowed down the golden street;
And nations brought their honors there,
And laid them at her feet.


4 And there no sun was needed,
Nor moon to shine by night,
God's glory did enlighten all,
The Lamb Himself the light;
And there His servants serve Him,
And, life's long battle o'er,
Enthroned with Him, their Saviour, King,
They reign for evermore.


5 O great and glorious vision!
The Lamb upon His throne;
O wondrous sight for man to see!
The Saviour with His own:
To drink the living waters
And stand upon the shore,
Where neither sorrow, sin, nor death
Shall ever enter more.


6 O Lamb of God Who reignest!
Thou Bright and Morning Star,
Whose glory lightens that new earth
Which now we see from far!
O worthy Judge eternal!
When Thou dost bid us come,
Then open wide the gates of pearl,
And call Thy servants home.

Godfrey Thring (b. Alford, Somersetshire, England, 1823; d. Shamley Green, Guilford, Surrey, England, 1903) was born in the parsonage of Alford, where his father was rector. Educated at Balliol College, Oxford, England, he was ordained a priest in the Church of England in 1847. After serving in several other parishes, Thring re­turned to Alford and Hornblotten in 1858 to succeed his father as rector, a position he retained until his own retirement in 1893. He was also associated with Wells Cathedral (1867-1893). After 1861 Thring wrote many hymns and published several hymnals, including Hymns Congregational (1866), Hymns and Sacred Lyrics (1874), and the respect­ed A Church of England Hymn Book Adapted to the Daily Services of the Church… Go to person page >
^ top

I heard a sound of voices. G. Thring. [The Song of the Redeemed.] Written in 1886, and published with music by H. S. Irons (Novello & Co.) the same year. It was sung at several Choral Festivals and ultimately appeared in Church Hymns, 1903.

All tunes published with 'I heard a sound of voices'^ top 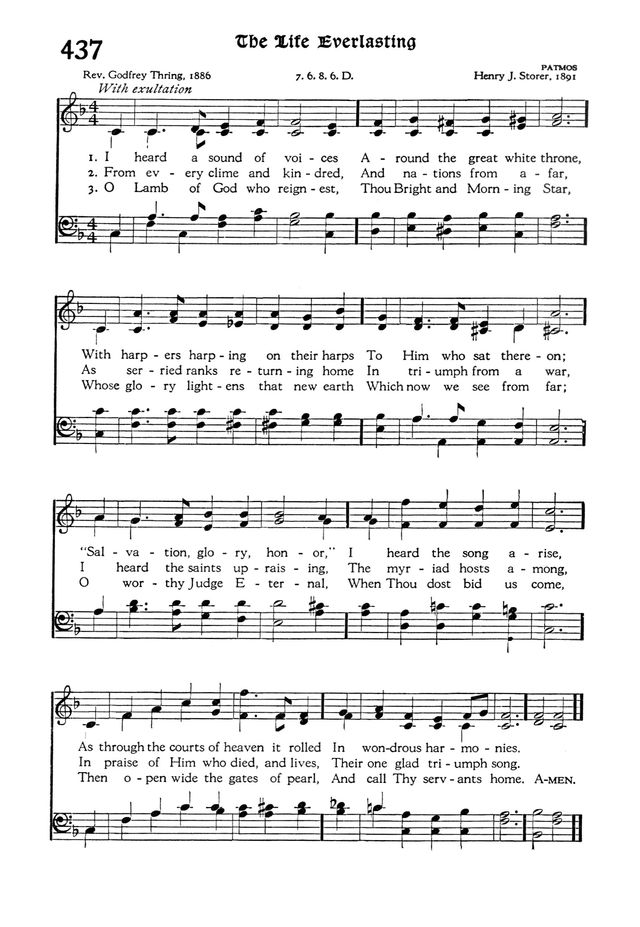