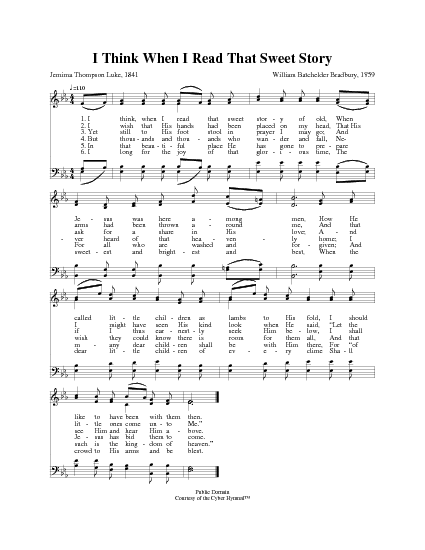 I think when I read that sweet story of old (Luke)

1 I think when I read that sweet story of old,
When Jesus was here among men,
How He called little children as lambs to His fold,
I should like to have been with them then.


2 I wish that His hands had been placed on my head,
That His arm had been thrown around me;
And that I might have seen His kind look when He said,
"Let the little ones come unto Me."


3 Yet still to His footstool in prayer I may go,
And ask for a share in His love;
And if I now earnestly seek Him below,
I shall see Him and hear Him above.


4 In that beautiful place He has gone to prepare,
For all who are washed and forgiven;
And many dear children are gathering there,
For "Of such is the kingdom of heaven." 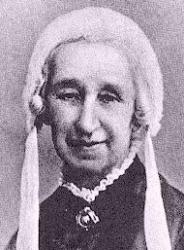 Luke, Jemima Thompson, the wife of Rev. Samuel Luke, an Independent minister of England, was the daughter of Thomas 422 Thompson, a philanthropist, and was born at Colebrook Terrace, Islington, August 19, 1813. When only thirteen years of age she began writing for the Juvenile Magazine. She published a volume titled The Female Jesuit in 1851 and A Memoir of Eliza Ann Harris, of Clifton, in 1859, but her name is known to the Christian world almost wholly through the one hymn found in this volume. Mrs. Luke died February 2, 1906. I think when I read that sweet 682 Hymn Writers of the Church, 1915, Charles Nutter… Go to person page >
^ top

“I went in the year 1841 to the Normal Infant School in Gray's Inn Road to obtain some knowledge of the system. Mary Moffat, afterwards Mrs. Livingstone, was there at the same time, and Sarah Roby, whom Mr. and Mrs. Moffat had rescued in infancy when buried alive and had brought up with their own children. Among the marching pieces at Gray's Inn Road was a Greek air, the pathos of which took my fancy, and I searched Watts and Jane Taylor and several Sunday- school hymn books for words to suit the measure, but in vain. Having been recalled home, I went one day on some missionary business to the little town of Wellington, five miles from Taunton, in a stage coach. It was a beautiful spring morning; it was an hour's ride, and there was no other inside passenger. On the back of an old envelope I wrote in pencil the first two of the verses, now so well known, in order to teach the tune to the village school supported by my stepmother, which it was my province to visit. The third verse was added afterwards to make it a missionary hymn.'"

The Rev. James Mearns has traced out some of its earliest appearances in print:—
1. Both hymn and tune (Salamis) were printed in the Sunday School Teacher's Magazine, 1841, on two unnumbered pages after p. 911 with the title "The Child's Desire: a Greek Air. Words by Miss Thompson, of Poundsford Park."
2. In the Union Hymn Book for Scholars, 1842, No. 67.
3. The Union Hymn Book for Sunday Schools, 9th ed., Bristol, 1844, No. 291.
4. In the Juvenile Missionary Magazine, June 1846, with the third stanza added.
The Greek Melody, commonly called "Salamis," is in the musical edition of The Church Hymnary, 1898; the S.P.C.K. Church Hymns, 1903, and other hymnals.

This is very similar to SALAMIS (12323), but the contour of the melody is strikingly different in the second phrase. 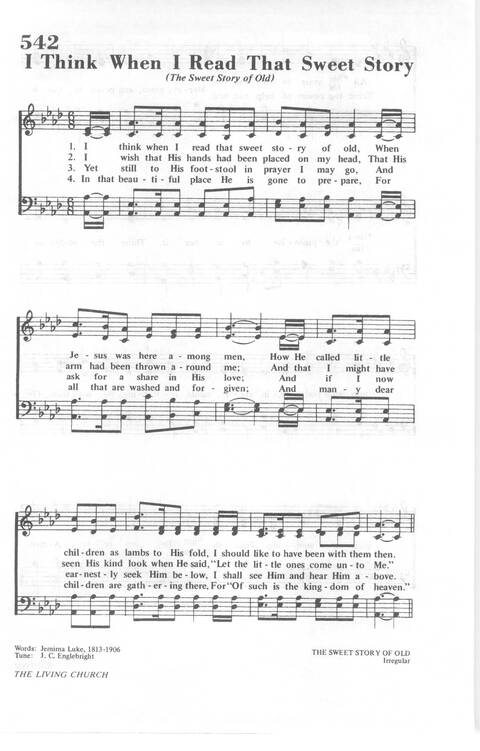 The Song Book of the Salvation Army #794