When You and I Were Young, Maggie 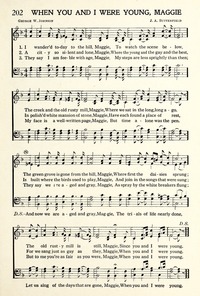 I wander'd today to the hill, Maggie


Chorus:
And now we are aged and gray, Maggie,
The trials of life nearly done,
Let us sing of the days that are gone, Maggie,
When you and I were young.


2 A city so silent and lone, Maggie,
Where the young and the gay and the best,
In polish'd white mansion of stone, Maggie,
Have each found a place of rest,
Is built where the birds used to play, Maggie,
And join in the songs that were sung;
For we sang just as gay as they, Maggie,
When you and I were young. [Chorus]


3 They say I am feeble with age, Maggie,
My steps are less sprightly than then;
My face is a well-written page, Maggie,
But time alone was the pen.
They say we are aged and gray, Maggie,
As sprays by the white breakers flung,
But to me you're as fair as you were, Maggie,
When you and I were young. [Chorus] 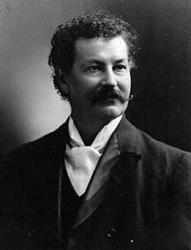 One of the most popular ballads of the 19th and early 20th centuries with over 40 versions to its credit, When You and I Were Young, Maggie began as a love poem written by a school master, George Johnson, who taught in Glanford Township, south of Hamilton. In 1859, George, then 21, had fallen in love with one of his students, Margaret Clark, 18. After they were engaged, Margaret became ill with tuberculosis. He wrote the poem as a pledge of undying love and later had it published in a collection of his verse, titled Maple Leaves. George married his Maggie in 1864 but she had a relapse with the disease, dying in 1865, only seven months later. In 1866, George’s friend, James Butterfield, set the poem to music. When You and I Were Young, Maggie went on to become one of most popular songs on both sides of the Atlantic. The words and music were adopted in the Scottish burgh of Selkirk more than 100 years ago. In Ireland, the tune is sometimes known as Nora, from a Sean O’Casey play, The Ploughs and The Stars. George, who never benefited financially from the song, later became principal of Hamilton’s Central Public School and taught at Upper Canada College. He was also a professor at University of Toronto and at Cornell University. He later earned a PhD at Johns Hopkins University. George married three times but never forgot his beloved Maggie.

[I wandered today to the hill, Maggie]

All tunes published with 'When You and I Were Young, Maggie'^ top 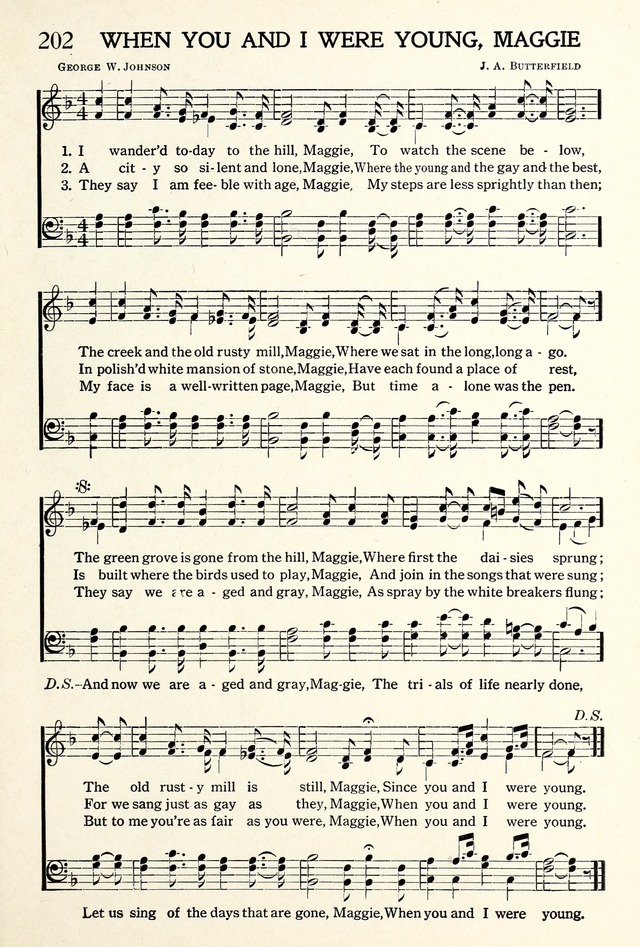