Kneeling at the Threshold 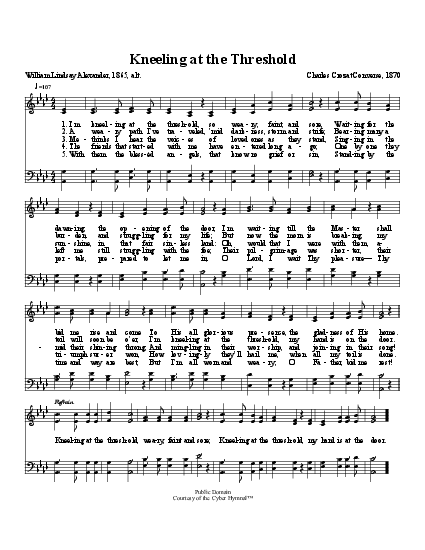 I am kneeling at the threshold

Author: William Lindsay Alexander (1865)
Tune: [I am kneeling at the threshold] (Converse)
Published in 23 hymnals

1 I'm kneeling at the threshold,
So weary faint and sore;
Waiting for the dawning,
The opening of the door;
I'm waiting 'till the Master
Shall bid me rise and come
To his all glorious presence,
The gladness of his home.


2 A weary path I've traveled,
'Mid darkness storm and strife;
Bearing many a burden,
And struggling for my life;
But now the morn is breaking,
My toil will soon be o'er;
I'm kneeling at the threshold,
My hand is on the door. [Refrain]


3 Methinks I hear the voices,
Of loved ones as they stand,
Singing in the sunshine,
In that far, sinless land,
Oh, would that I were with them,
Amid their shining throng,
And mingling in their worship,
And joining in their song! [Refrain]


4 With them the blessed angels,
That know no grief or sin;
See them by the portals,
Prepared to let me in!
O Lord, I wait thy pleasure,
Thy time and way are best;
But I'm all worn and weary.
O Father, bid me rest! [Refrain] 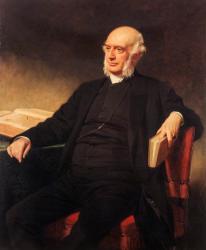 Alexander, William Lindsay , DD. LL.D., of Pinkieburn, Musselburgh, son of William Alexander, Esq., Leith, born in the vicinity of Leith, August 24, 1808. After studying at the Universities of Edinburgh and St. Andrew's, he became, in 1828, Classical Tutor in what is now The Lancashire College. After studying for some time at Halle, he, in 1835, became minister of North College St. Congregational Church, Edinburgh, removing with his congregation in 1861 to a new church in George IV. Bridge, called the Augustine Church, and retired from the pastoral charge of the same in 1877. He died at Pinkieburn, Dec. 20, 1884. He was, from 1854 to 1881, Professor in the Scottish Congregational Hall. In 1846 he received the degree of D.D. from the Univers… Go to person page >
^ top

I'm kneeling at the threshold, aweary, faint, and sore. W. L. Alexander. [Death Anticipated.] "I wrote it," writes Dr. Alexander, "after an evening spent with my venerable father then near the end of his earthly pilgrimage, and when he spoke much of his longing to depart to and join those who had been the companions of his pilgrimage, but had preceded him into the better land." (E. MS.) In 1865 it was printed in the Sunday Magazine in 5 stanzas of 8 lines. From that magazine it first passed into a few American hymnals, and then into the 1874 Supplement to the New Congregational Hymn Book; the Hymnal Companion, 1876, and others. It is the most popular of Dr. Alexander's hymns.

[I am kneeling at the threshold] (Converse)


[I am kneeling at the threshold] (Lowry)

All tunes published with 'Kneeling at the Threshold'^ top 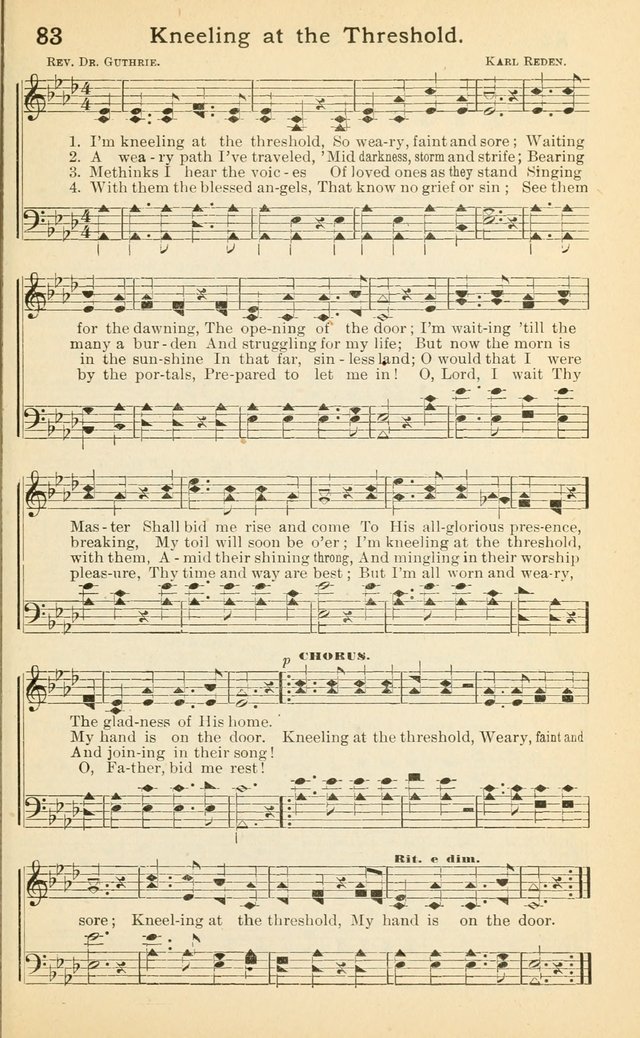 View Page
Lasting Hymns: a collection of songs specially designed for every department of worship and suitable for all services of the churches (1901), p.83
^ top