In My Distress I Cry to God 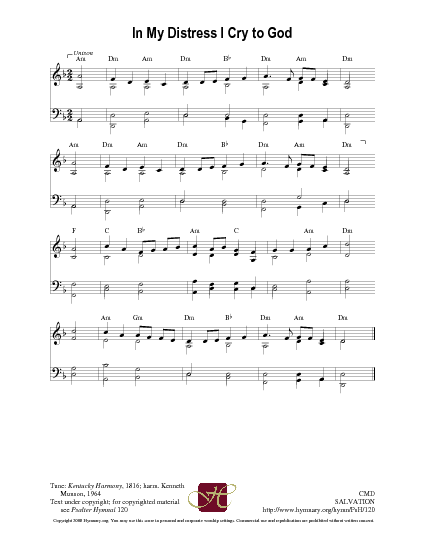 In my distress I cry to God

Clarence P. Walhout (b. Muskegon, Michigan, 1934) studied at Calvin College, Grand Rapids, MI, the University of Michigan in Ann Arbor and Northwestern University in Evanston, Illinois; he taught many years at his alma mater, Calvin College, and was a member of the Poet’s Workshop, a group of several writers who prepared psalm versifications for the 1987 Psalter Hymnal; he was also editor of the journal Christianity and Literature and co-author of The Responsibility of Hermeneutics (1985). Bert Polman Go to person page >
^ top

A prayer for deliverance from slanderers and the harm they cause.

Psalm 120 is the first in a series of "Songs of Ascents" (120-134) sung by the Israelites as they went up to worship at the LORD's temple on Mount Zion. A prayer for deliverance from false accusers, the last verse (v. 7) suggests that the author was a king. If so, his enemies were trying to discredit him at home or spread lies about him in foreign lands to fuel a concerted effort to attack him. For pilgrims to Jerusalem, this song could serve as a prayer for deliverance from those who spread false reports about them along the way. The psalmist pleads for God's deliverance from the barbed tongues of malicious slanderers (st. 1), noting the vulnerability and isolation of one slandered by associates (st. 2).

Clarence P. Walhout (PHH 6) versified this psalm in 1982 for the Psalter Hymnal.