I'll never say no to Jesus

In the sweet vale of peace 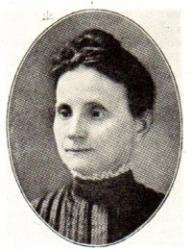 Ada Jane Blenkhorn Canada 1858-1927 Born in Cobourg, Ontario, the 10th of 11 children, she emigrated with her family to the U.S. In 1884 and settled in Cleveland, OH.. She was raised a Methodist, and began writing hymn lyrics at age 34. A prolific writer of hymn lyrics, she was about to give it up when a friend encouraged her to continue, telling her some soul might be saved by a hymn she would write. She worked for many years as secretary to her brother, Henry's, real estate company. After his death in 1923, she became president of the company. She never married. John Perry  Go to person page >
^ top

Hymns of Worship and Songs of the Gospel #d137

Display Title: I'll never say no to Jesus First Line: In the sweet vale of peace Author: Ada Blenkhorn Date: 1906
Hymns of Worship and Songs of the Gospel #d137
All instances^ top
Suggestions or corrections? Contact us