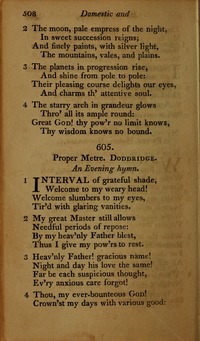 1 Interval of grateful shade,
Welcome to my weary head!
Welcome, slumber, to my eyes,
Tir'd with glaring vanities.


2 My great Master still allows
Needful periods of repose:
By my heav'nly Father blest,
Thus, I give y pow'rs to rest.


4 Thou my ever-bounteous God!
Crown'st my days with various good.
Thy kind eye, which cannot sleep,
My defenseless hours shall keep.


5 What if death my sleep invade?
Should I be of death afraid?
While encircled by thine arm,
Death may strike, but cannot harm.


6 With thy heav'nly presence blest,
Death is life, and labour rest.
Welcome sleep or death to me,
Still secure, for still with thee!


Source: A Collection of Hymns and A Liturgy: for the use of Evangelical Lutheran Churches; to which are added prayers for families and individuals #408

Interval of grateful shade. P. Doddridge. [Evening.] In the "Doddridge Manuscript" this hymn is given in full, but without date. In 1755, it was included in Doddridge's (posthumous) Hymns, as the second of the "Hymns on Particular Occasions and in Uncommon Measures," being No. ccclxiii. of the volume, in 70 lines, and entitled "An Evening Hymn, to be used when composing oneself to sleep." It is also in J. D. Humphreys's edition of the Hymns, 1839, No. 309. In 1812, Dr. Collyer gave the complete hymn in his Collection, dividing the same, as in Doddridge's Hymns, into three parts, and using each part as a separate hymn. He also divided the unbroken lines of the original into stanzas. The three hymns thus made were:—
"Interval of grateful shade."
“What though downy [peaceful] slumbers flee."
“What if death my sleep invade."
This arrangement was repeated in Bickersteth's Christian Psalmody, 1833, Nos. 489, 490, 491, in Elliott's Psalms & Hymns, 1835, No. 827, and other collections. In this manner these three hymns were handed down to modern collections. A cento from the poem is also in common use. It begins: "Heavenly Father, gracious Name."

All tunes published with 'Interval of grateful shade'^ top 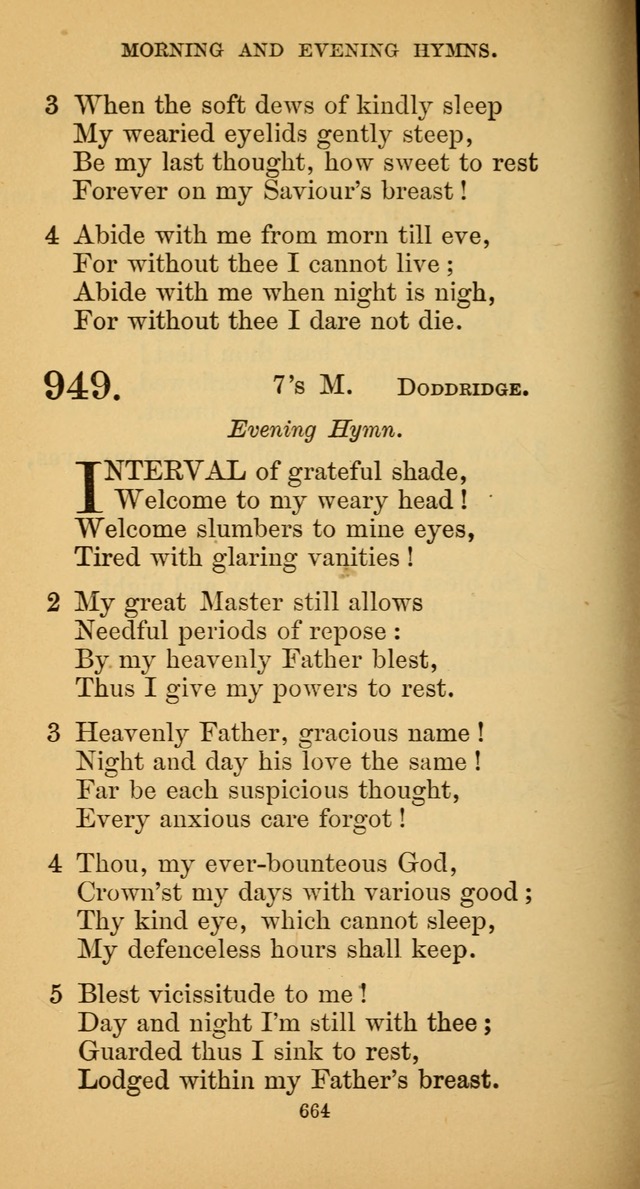 A Collection of Hymns and a Liturgy #408

A Collection of Hymns and A Liturgy #408

A Collection of Psalms and Hymns for Christian Worship #55

A Collection of Psalms and Hymns for Christian Worship (10th ed.) #55

A Collection of Psalms and Hymns for Christian Worship (6th ed.) #55

A Collection of Psalms and Hymns for Christian Worship. (3rd ed.) #55

A Collection of Psalms and Hymns for Christian Worship. (45th ed.) #55

A Collection of Psalms and Hymns for Christian Worship. 16th ed. #55

A Collection of Psalms and Hymns #605

A Selection of Sacred Poetry #605

A Selection of Sacred Poetry #605

Congregational Hymn and Tune Book; containing the Psalms and Hymns of the General Association of Connecticut, adapted to Suitable Tunes #996

Hymns for Church and Home #350

Hymns for Family Worship with Prayers for Every Day in the Week, Selected from Various Authors #52

Hymns for Family Worship, with Prayers for Every Day in the Week (2nd ed.) #52

Hymns for the Christian Church, for the Use of the First Church of Christ in Boston #450

Hymns of the Church Militant #356

Psalms and Hymns, for Christian Use and Worship #H701

The Philadelphia Hymn Book; or, a selection of sacred poetry, consisting of psalms and hymns from Watts...and others, adapted to public and private devotion #605

The Springfield Collection of Hymns for Sacred Worship #440